Foster runs through racetime injury to take sixth at state 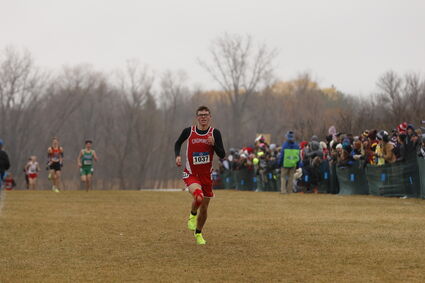 Noah Foster ran the toughest race of his life - bleeding and in need of stitches - at Saturday's Class A Minnesota State Cross Country meet in Northfield.

He was about 100 meters into the race and heading into the first turn when the mob of runners compacted and the Cromwell Wright senior felt someone step on his left foot.

"His spike sliced open my shoe and the side of my foot," Foster said. "I felt it when it happened but I guess the adrenaline made the pain go away."

The fact that his foot was cut and coming out of his shoe was less than ideal, but Foster ran the second-best time of his life, finishing the challenging course at St. Olaf College in 16 minutes, 14.7 seconds, and collapsing at the finish in sixth place.

He didn't blame the dramatic ending on any blood loss. "I was just really physically fatigued," he told the Pine Knot on Monday. "I gave it my all."

Foster went from the finish line to urgent care, where he got six stitches on his foot. He's on crutches now, and hopes the injury won't interfere with the basketball season.

In his third state meet (there was no meet in 2020 but he qualified), Foster finished 25 seconds behind first-place finisher Brandon Kampsen of Sauk Centre and about 5 seconds behind the fifth-place runner. In 2021, Foster took fourth place in 16:26.03, almost 12 seconds slower.

"It was a brutal race, but the time was good," Foster said of his last high school run. "It wasn't what I wanted place-wise - I wanted Top 3 - but I'm not going to complain."

Other Carlton County and South Ridge boys in the top 100 for Class A finished as follows:

After taking second place at the Section 7A meet, the Moose Lake/Willow River/Barnum boys team achieved its goal of topping the Rebels 1999 team, taking 13th place, two spots ahead of that last team to make it to state.

A total of 159 runners finished the Class A boys race Saturday.

Raptors hold their own

Evelyn Brodeen, the Section 7A champion, was the top girls runner from the area, taking 16th place in the Class A girls meet. The junior, who runs for South Ridge, finished the 5K race in 19:30.3. The top girls runner, Jade Rypkema from Nevis, finished in 17:43.5.

Brielle Simula was the fastest runner from Carlton County, taking 37th place in 20:06.8.

Competing at the Class A State Cross Country meet for the second year in a row, the combined Carlton/Wrenshall girls team again placed 14th in the team competition, but all five scorers bettered their times from a year ago.

Other Raptors runners to score included Sara Cid in 108th, Abby Cid (110) and Isabel Riley (128) and Lucy Stevens (129) along with Teagen Tessier (152) and Nadia Tessier (155). Ruth Sandstrom, who had finished in 12th place at sections, got sick and couldn't compete at the state meet this year.

Coach Brenda Knudsen said she tried to strategize last year, but this year told the girls to just relax and have fun.

"And they ran faster," she said. "So relaxed may be better."

"The big thing is getting to state," she said. "Once we're there we're really just going for individual records."

The team may be small, but they are strong together, she said.

"We are all such close friends and we did a lot of mental toughness training and team bonding that I think really helped us to defend our section title and get back to state," Cid said. She said the cooler weather helped on Saturday, versus the hot and sunny day at state last year.

Junior Jack Riley was the only representative of the boys Raptors team at state, making his second trip there and setting a personal record Saturday, finishing in 17:13 for 57th place.

"I think he ran 50 seconds faster than last year," Knudsen said. "A big shout-out to him because he's had an up-and-down year and he was looking for redemption. I'm really proud of him, too."

"I would like to build the team," she said. "It's really a fun sport, but it takes a different kind of person. You don't get time-outs, you just have to show up and do it - and be willing to suffer but have fun doing it."

Cloquet senior Miles Fischer outdid himself at Saturday's Class AA state cross country meet. The sole state qualifier from Cloquet placed 15th, a huge jump after finishing in 42nd place in 2021. Fischer completed this year's race in 16:18.3, just over a minute behind the first-place runner from Belle Plaine.

"I decided before the race that I had nothing to lose by going out hard, so I went out with the top runners and just did my best to stay there. I fell a few spots in the second mile but for the third mile I held on pretty well," he said.

It was Fischer's fourth year to qualify for state, but third year of running because of Covid. This was his first time not traveling there as part of a team. 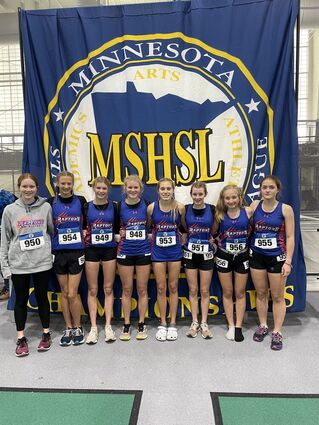 Members of the Raptors girls cross country team qualified for state as a team after taking first place at the Section 7A meet. They took 14th place on Saturday.

"During the race itself you're kind of alone out there anyway," he said. "It's the warming up and cooling down, and previewing the course that were different, and a little sad."

Fischer said the weather was perfect during his race - chilly with a light mist - and he was ready.

Fischer credited his success at state and all season long on training smarter this year and learning to communicate better with his coaches. He had high praise for head coach Chandra Allen and assistant coach Ryan Zimny and the training they provided, working with him and the rest of the team.

"I think in the next few years you'll be seeing a really strong Cloquet team," he predicted.

Fischer will start the Nordic ski season soon, another sport in which he's competed at state since ninth grade.