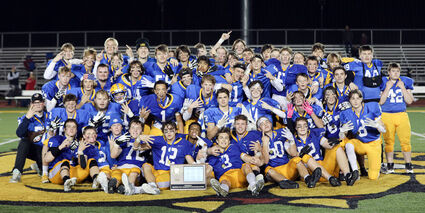 When Esko needed big plays Thursday against Pequot Lakes, the defense delivered. Because of that, the Eskomos are headed to State.

Whether it was a pair of sacks by Nolan Witt, or Witt knocking a ball loose for Joey Antonutti to scoop and score to solidify the win, the Esko defense came up big against a high-flying Patriots team.

"The defense played their best game of the year," said Esko coach Scott Arntson of the Eskomos' 28-19 win in the Section 7AAA title game at Malosky Stadium on the University of Minnesota Duluth campus. "Their quarterback was awfully good and our guys had to overcome a lot of turnovers and bad field position, but they found a way."

The win put unbeaten and top-ranked Esko into the first round of the Class AAA state football tournament at 1 p.m. Saturday in Brainerd against the No. 2 team in Minnesota, according to the Star Tribune, Dilworth-Glyndon-Felton. The Rebels are also 11-0 and are the Section 8 champions.

"They are not a flashy team," Arntson said. "They come right at you, and that means they've got to have some dudes. They aren't going to trick you, which means they have good technique and they are physical, so we'll need to be ready."

Against Pequot Lakes, the Patriots struck quickly in the first quarter when quarterback Grant Loge plowed in from the 1-yard line. Following the extra-point kick, the Patriots were up 7-0.

"We told the guys before the game that there would be no decisions being made based on if they scored first, or if we scored first," Arntson said. "We talked about having to play the entire 48 minutes and worry about the next play and not to make any decisions on how the game would play out until the game actually was done."

Esko tied the game early in the second quarter when Witt crashed in from the 2-yard line and Wyatt Hudspith knocked through the extra point. However, the Patriots answered back when Bryar Nordby scored on another 1-yard run. The Patriots missed the extra-point kick, keeping the score at 13-7 in their favor.

A huge turning point in the game came with just one second left in the first half, when the Eskomos elected not to kick a field goal. Instead it was Ty Christensen hitting Carter Zezulka on a 7-yard touchdown pass; Hudspith booted the extra point, which gave Esko the 14-13 edge entering halftime.

Esko received the kickoff to start the second half, but a fumble gave the Patriots the ball and a few plays later it was Loge plowing in from the 1-yard line, giving Pequot Lakes a 19-14 lead after they were unable to convert on the 2-point conversion.

"We had to overcome a few turnovers and they also got an onside kick against us," Arntson said. "That limited the number of possessions we had, plus they did a good job of taking away our big plays. We had to grind it out, and the guys stayed focused and did that."

Trailing by 5 entering the final quarter, the Eskomos needed a big play and got it from Javontae Gregory, who raced 18 yards to pay dirt, making it 21-19 after the extra-point kick by Hudspith.

"We knew they don't really have a kicker and they hadn't attempted a field goal all year," Arntson said. "That's why we figured to go for the kick by Hudspith instead of a 2-point conversion. We just didn't think it would come down to a field goal and the 2-point lead was as good as 3 points."

The Patriots made a valiant attempt at a comeback as they marched inside the Esko 30-yard line late in the game. That's when Witt was able to dislodge the ball from Loge and Joey Antonutti scooped the ball off the turf and went 74 yards for the final score of the game. 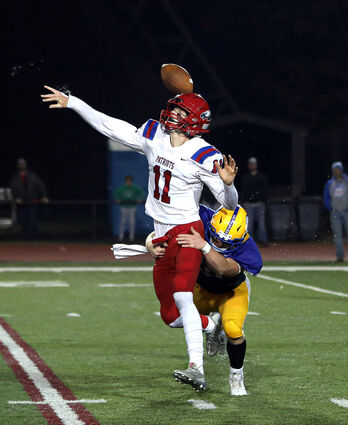 "Our defense is athletic, long and they love to hit," Arntson said. "We knew they had a great quarterback, athletic wide receivers and that it was going to be a tough game, but our guys found a way to get a defensive score."

Pequot Lakes came out in an effort to take the big plays away from the high-flying Eskomos and specifically not allow Makoi Perich to beat them. Perich also spent much of the game overcoming cramping, and that meant Esko needed to rely on its other star players to turn the tide.

"That's what I like about this group," Arntson said. "We take what you give us. We call our plays based on the way the defensive line lines up and the coverage of the secondary. Our quarterback does a great job of getting the ball to the right guy."

Esko's state quarterfinal game in Brainerd can be heard locally on WKLK-FM 96.5 at 1 p.m. Saturday.