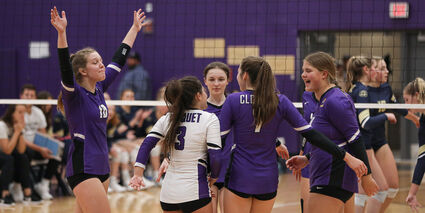 Each season, Cloquet volleyball coach Heidi Anderson has her team take part in a weekly book club, as her players learn life skills they can take with them well beyond the volleyball court.

It's clear the Lumberjacks have written in some of their own chapters as well.

While it wasn't a storybook ending for Cloquet in another Section 7AAA championship loss to Grand Rapids - an 11-25, 15-25, 18-25 sweep Saturday, Nov. 5 - it's undeniable what the Lumberjacks have accomplished over the past pair of seasons between the lines.

By the numbers, Cloquet has counted a dizzying 44 wins - to just 14 losses - in the last two seasons. The team has produced plenty of players with conference, section and even state honors, while Anderson was recently named the 7AAA coach of the year, again.

Not to mention consecutive appearances in the section title tilt, the most recent played before about 600 fans at a buzzing Hermantown High School last weekend.

"It's been such an awesome experience to have such a good program that we were able to get there two years, back to back," said senior Aili Buytaert. "Hopefully, the team can work hard and get back there next year, too."

While a three-peat into the section's biggest match is long down the road, it's not inconceivable.

Cloquet, which finished 22-7 this season, got 11 kills and 11 digs from all-state outside hitter Ava Carlson, while libero Quinn Danielson added 11 digs and setter Carly Johnson added eight assists and eight digs against the Thunderhawks. The trio are all juniors.

LaPlant also counted 12 digs, five kills and an ace and libero Lindsey Racine added 26 digs in a match where the Thunderhawks trailed for just one of the 119 recorded points.

As does Cloquet's Anderson, who along with teaching elementary physical education in Cloquet, has been at the Lumberjacks' helm for 19 seasons. While a lifelong lover and grower of volleyball - as a former collegiate player, committee board member and even high-level camp clinician - Anderson gets great joy out of helping shape her teams off the floor, as much as on it.

Weekly book clubs are team-wide. Leadership skills with her captains in Buytaert and Carlson continued all season long. Goal-setting, connecting with players and, yes, a bit of reading.

"That's something we make a priority," said Anderson of their book sessions. "It's so much more than just playing the game of volleyball, but learning how to be good teammates and develop good leadership skills so they can go out in our community and be amazing leaders. They really have taken that to heart."

"We've learned a lot about not only improving your own skill, but collectively making the team strong and what we can do to help others," said Carlson. "We work a lot on our goals." 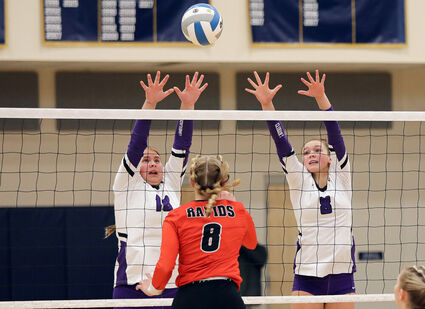 One of those goals was to return to the section championship this year. The Lumberjacks did just that, and not by accident.

"It came by design, not by hope, or by luck - that was the plan they set," said Anderson. "It was fun to get back there and put in the effort to do so.

"It's hard sometimes when you're accepting the second-place medals and plaque when you put a lot of work in to get first place, but you just don't get to play in the section final every year. It's pretty great to get to play in it two years in a row. Hopefully, they look back one day and realize that this was a special moment."

Buytaert, now finished with her past half-decade career wearing purple and white, sure will.