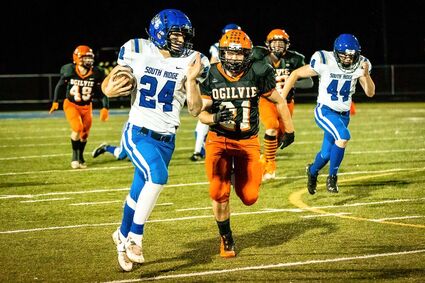 After posting a regular-season record of just two wins, the South Ridge Panthers hit their stride in the postseason, making it to the Section 5 9-man championship game against defending section champions Ogilvie. The Lions, who had defeated the Panthers earlier in the season, proved to be just too good as they rolled over the Panthers, 50-8.

"They are just a good football team," said head coach Brent Johnson of South Ridge. "They made too many big plays. We had some chances early, but couldn't score. They are a very solid team with a lot of depth."

In 9-man football, most schools are able to suit up about 25 to 30 players, but Ogilvie had 42 athletes on the sidelines on Friday night at Esko. That depth showed as the game wore on. "It is pretty tough to overcome," Johnson said.

The Lions put up 30 first-half points and cruised to victory from there. 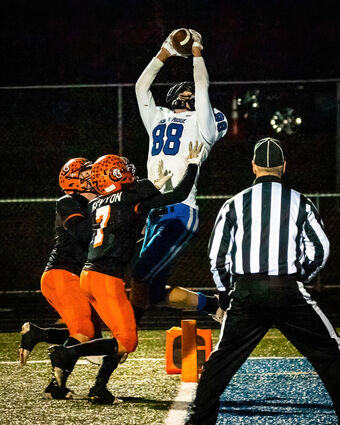 Austin Josephson goes up for a pass in the end zone in the nine-man Section 5 championship game Friday in Esko. It was the only score South Ridge could muster in a 50-8 loss to powerhouse Ogilvie.

Since starting the season with a pair of losses to Cherry and Mountain Iron-Buhl, Ogilvie has gone on a seven-game win streak. In that seven-game span, the Lions averaged over 57 points a game, while giving up an average of just 6 points per game. In short, they have dominated their opponents.

In their previous game against South Ridge, the Lions won 56-6.

The bright spot for South Ridge came in the third quarter when ninth-grade quarterback Ben Pretasky tossed a pass to Austin Josephson for the team's only touchdown of the game.

"Pretasky had his ankle twisted up pretty bad, but he wouldn't let us take him out of the game," Johnson said. "That is pretty impressive to have a ninth-grader step up, and just shows you the kind of kid he is."

The Panthers went just 2-5 during the regular season, but they found a way to win on the road in Cromwell in the first round, before bowing out to the Lions.

"I'm proud of these kids and how they never quit," Johnson said. "That was a tough team we faced, and our kids played hard and should be proud of their effort."