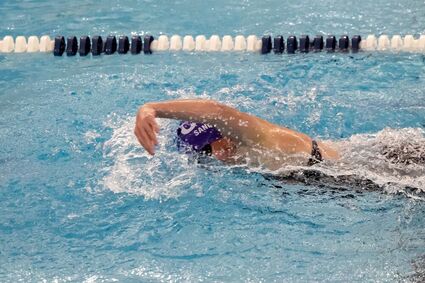 Cloquet senior Hannah Sandman swam the fastest time in the 200 freestyle on Thursday in the preliminaries and took second place in the Section 7A girls swimming and diving meet finals Saturday, which qualified her for this week's state meet.

Cloquet is sending one more athlete to state competition this fall, after senior Hannah Sandman swam her way to a second place and a personal record during last weekend's Section 7A girls swimming and diving meet in Hibbing.

Sandman recorded the fastest time at 2:02.32 in the 200 freestyle Thursday in the preliminary races, then took second in the finals Saturday, which qualified her for the Class A girls swimming and diving state meet. Her final time was 2:01.90, her new personal record.

"Hannah is just a super person and a great leader," said head coach Rachel Peterson. "She is a super-hard worker. She is dedicated to the team, and whatever you ask she will do. She gives maximum effort every single practice and she comes through in the clutch. There is a reason she is the anchor on our relays."

Over the past three years as head coach of the Cloquet-Esko-Carlton swim team, Peterson set a goal of building depth and a program the school can be proud of. Hard work was rewarded last weekend.

"We had 19 swimmers and three divers in the meet," Peterson said. "We had a lot of fantastic performances."

In addition to the 200-meter freestyle race that got her to State, Sandman also finished third in the 100 freestyle, and Megan Chopskie was third in the 100 backstroke. Only the top two swimmers make the state meet.

"The girls gave everything they had and swam well," the coach said.

Julia Peterson finished seventh in the 200 individual medley and also took seventh in the 100 breaststroke. Emma Peterson was eighth in the 500 freestyle, and Rilee Durovec was also eighth in diving. Lizzy Wells added a ninth-place finish in diving and Jessica Pagelkopf was 10th. The medley relay team of Analise Kalm, Rylee Demers, Makenzie Simula and Nattie Butler finished in ninth place and Emma Peterson added a 10th-place finish in the 200 freestyle.

"We are excited on how the season went," coach Peterson said. "We have some great seniors and we added some phenomenal young girls who will continue to build the program. While we lose some great seniors, we have plenty of young kids coming up."

"Our goals for the program are to build a solid foundation and help the girls improve throughout the year," Peterson said. "We want them to be well-rounded swimmers and people, be competitive and to lead the program to higher things." 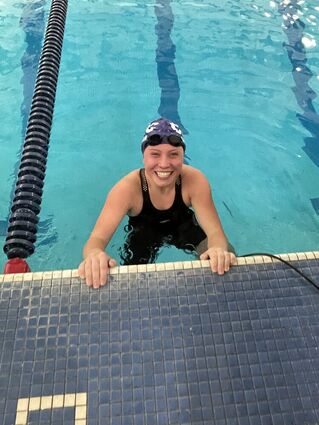 Hannah Sandman left for the state meet in Minneapolis on Wednesday and was scheduled to swim in preliminaries on Thursday. If she finishes in the top 16, she will move to the state finals Saturday.

This year's team won the Section 7A Athletic Gold Standard Award for the highest grade point average. In order to qualify for the award, a team must have a GPA of a minimum of 3.7 or higher. The Lumberjacks topped all teams in Section 7A with an average GPA of 3.89.

"We are very proud of that accomplishment," Peterson said. "It just goes along with the fact that we want well-rounded athletes and young women."

Coach Peterson left for the state meet in Minneapolis on Wednesday with Sandman, who was scheduled to swim in preliminaries on Thursday. If she finishes in the top 16, she will move to the state finals Saturday at the University of Minnesota aquatics center.

"We are going down with the goal to swim well, and if Hannah does, she has a chance to set a school record," Peterson said. "If she can take down the school record in the process, that would be great."