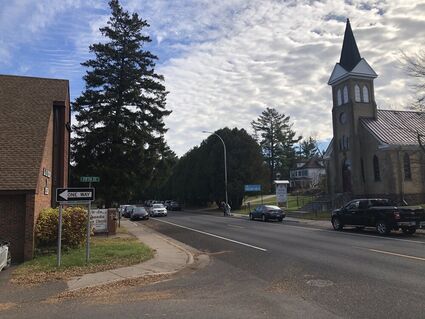 Bethesda Lutheran Church, left, and River's Edge Presbyterian Church in Carlton have stood across the street from each other for a very long time. The two churches are now partnering and sharing a pastor.

For decades, the two churches have stood across the street from one another: one Lutheran, the other Presbyterian. Each holding services every Sunday, plus weddings and funerals, Bible studies, baptisms and confirmation classes. Each seeing the number of people in the pews declining over the years.

Now the two Carlton churches - Bethesda Lutheran and River's Edge Presbyterian - are taking action together to change that. They formed a partnership, starting in October, that leaves them with separate buildings and identities, but shared pastoral services and youth groups.

Pastor Seth Wynands will lead both churches. And why not, he says.

"We have the same mission and the congregations have been good friends to each other," he said, adding that he's heard stories (not jokes) about the two pastors singing duets together, sometimes with a Catholic priest joining in. "It will also give both churches more resources to serve the community, by sharing pastoral resources through me."

The partnership was approved by both congregations, which voted 100 percent in favor of the move. The decision also was cleared with higher- ups - Bethesda with the synod, River's Edge with the presbytery - who supported the decision.

Bethesda member Renee Kesty put it simpler: "We all pray to the same God," said Kesty, standing in line for the potluck dinner following a joint service at River's Edge Sunday, Oct. 30.

The joint service drew a packed house and high praise from many, including Bethesda Lutheran council president Lynn Beatty.

"I wish more people could have heard it," she said. "Just the joining of the two churches worshiping together, the music, the laughter, the prayers. It was just heartwarming.

"With everything that's going on in the world, we want people to know that churches work together. There's one God. Let's get together and do more good for the community."

Diners filled nearly every table at the potluck that followed, sitting together with members of each congregation, breaking bread, as they say. The potluck offerings filled a large table and more than 70 people stayed to eat.

If anyone were going to object to the change, it could have been longtime members Lil and Gordy Davis. After all, Bethesda has been their family church for 64 years.

But they were thrilled.

"Pastor Seth is a good one," Lil said.

For now, combined church service will be held only two or three times a year. Most Sundays, services will be held at 8:30 a.m. at Bethesda and 10:30 a.m. at River's Edge. The sermons will be the same, so if someone sleeps through the 8:30 sermon, they can catch the 10:30 across the street. The two churches will also share a youth group, and hope to have enough combined kids to hold confirmation classes. They were planning a combined church bazaar as well. 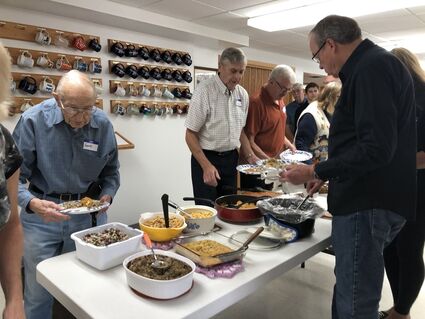 It is an idea they'd considered before. Two years ago, Bethesda reached out to River's Edge about sharing pastoral services, but the Presbyterian Church wasn't interested at the time, as Pastor Dennis Morreim was preaching there in his retirement. When he decided this spring to "reretire," then the Presbyterians - who had already combined the Wrenshall and Carlton congregations - reached out to their Lutheran neighbors across the street.

Lori Moe has attended the Presbyterian church for close to 30 years. Moe said the two churches have worshiped together in the past, especially for ecumenical services like Christmas and Easter, and other special occasions.

Looking ahead, she's excited to see what the two churches can accomplish together, leading by example.

"I want the community to see there are no barriers. It doesn't matter what place of worship you choose, we can all work together and spread God's love," Beatty said. "You cannot have too much love."