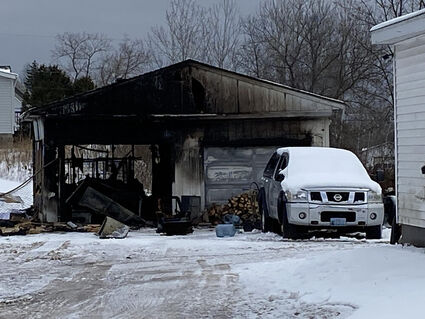 Firefighters found a "heavy, well-developed fire" in a garage in Scanlon Friday night, said Cloquet Area Fire District Chief Jesse Buhs, who confirmed the death of seven dogs that were housed in the garage.

Seven dogs died late Friday, Nov. 18, when a garage they were kept in caught fire in Scanlon.

The fire occurred at 1208 28th St. Firefighters began arriving within a few minutes of being paged at 9:10 p.m. Friday.

They found a "heavy, well-developed fire" in the garage, said Cloquet Area Fire District chief Jesse Buhs, who confirmed the deaths of the dogs.

"It had progressed to the point where there were no survivable conditions within the building," Buhs said. "It tugs at people's heartstrings when there are pets involved."

Cloquet police chief Derek Randall said his department is working with the CAFD to determine the cause of the fire. "We do not have any information to suggest anything suspicious or criminal, but the case is still open," Randall said late Tuesday. He confirmed that seven pit bulls died. "I'm unaware of any business or kennel permit for that location," he said.

The fire district is investigating the cause of the fire, and Buhs said he spoke with Cloquet police "to discuss the investigation from our end."

There was a wood stove operating inside the garage at the time of the fire, the chief said. But Buhs added it was "too early to definitively say" the stove was involved.

"Our main focus is the cause and determination of how the fire started," Buhs said.

The fire and speculation about the animals was being debated on neighborhood social media. The two-lot parcel at that location had belonged to the late Wayne Ochs, formerly of rural Cloquet. He passed away in the summer, according to his obituary.

The property features the wooden garage detached from a small house closer to the street. The house was untouched by the fire. The total property had been valued at $75,500, according to the Carlton County assessor's market value report for taxes payable in 2023.