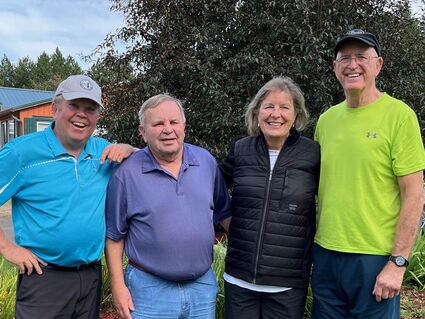 This year marked the 50th anniversary of the legislatively approved Title IX provisions that required equal funding for genders in athletics. It is fitting and wonderful that Deb Hunter, who many feel is Cloquet's most gifted girls and women's athlete, made it back to her hometown in 2022 to share some of her fond sports memories.

Even though it's not in her nature, I asked Deb to try to not be humble. I wanted to hear the classic sports stories from her vantage point, with no filters.

It's been about 45 years since Hunter played basketball with the Cloquet Lumberjacks at the Cloquet Civic Center, eventually starring as an All-American point guard for the University of Minnesota Golden Gophers. After Title IX passed, Deb was part of some of the first Cloquet girls basketball teams afterward.

Hunter recently traveled from her home in Texas to Cloquet to meet with her former high school coach Dave Burgett and a few other friends. The goal was to reminisce and have fun.

Since it was one of my favorite stories, I asked Deb and Dave to tell me about the Duluth East games in the late 1970s. Always a tough rival, Duluth was having a good season and Cloquet had been to the state tourney the year before, Hunter's junior year. Dave said the Duluth News Tribune had interviewed him before the game and was trying to build up to what on paper was great girls basketball contest.

"Trouble was," said Dave, "Deb was ill and Becca Brown had a badly sprained ankle. We would be missing about 50 points in scoring averages from those two players for this highly-touted game." The Tribune showed no sympathy.

On game night, Duluth East opened with a full-court press against mainly Cloquet reserves - and never relented. They kept the pressure on the whole game. The final score was East 76, Cloquet 14. The newspaper stated that even with an additional 50 points, Cloquet would have been defeated handily. It got Hunter's attention and stuck in her craw.

About a month later, Cloquet faced a rematch with East. Much like Kirby Puckett's World Series "Get on my back" speech, Hunter just told Burgett and teammates, "Don't worry, Coach, I've got this one." Debb scored 45 points and handed out plenty of assists and Cloquet won at home by 25 points. It was sweet revenge.

It's sometimes hard to remember and appreciate all of Hunter's Cloquet and University of Minnesota records.

At Cloquet, she was Minnesota All-State in basketball in 1978 and 1979 and volleyball in 1979, 4x100 anchor on a Minnesota state track champion relay team, 1979 Miss Basketball finalist, and won a total of eight regional gold championships.

For the Gophers, she was a Kodak All-Region honoree in 1982 and 1983, and twice her own team's MVP, according to her University of Minnesota Hall of Fame biography. Hunter led the Gophers in assists and steals for three straight years, and set many records that stood for years, including best career free throw percentage (771), most career assists (632), most assists in a game (15), and most steals in a game (12). A banner with her picture hangs in the Williams Arena rafters.

Importantly, Hunter was All-American and All-Big Ten in 1983, the first year the conference sponsored women's basketball.

Since she played against so many great basketball players, I asked Deb who, in her view, were some of the best she competed against.

"Well, the Big Ten always had outstanding guards, but by far the best I played against was Lynette Woodard of Kansas University," she shared. "She was tall, fast, I'm sure she could dunk it, and later became the first female player on the Harlem Globetrotters."

On one occasion, while playing the Gophers, Woodard stole the ball from Hunter at midcourt and dribbled in for a layup and slammed her hand on the backboard after her shot. "We'd never seen that before," Hunter said.

Woodard was signed by the Harlem Globetrotters in 1985. Over her career, Woodard was a two-time Kansas state high school champion, All-American all four years at the University of Kansas, an Olympian, a professional player in Europe, and signed with the inaugural draft of the WNBA at age 38. Her jersey has been retired by the Kansas University.

Deb's dad, Dick, joined in the conversation. A former Cloquet preacher, he also played fastpitch softball for Whitaker Buick in St. Paul. He played against, and later with, some of the great Cloquet teams as a catcher. He also refereed high school sports in the region. The group talked at length of some of the distinguished characters around local high school sports.

l shared in the stories with laughter. It's always fun to sip on coffee or a soft drink with friends and reminisce of days gone by. Whenever it's established, the Cloquet Sports Hall of Fame will undoubtedly feature Deb Hunter in the inaugural class.

Steve Korby's interest in writing goes back to when he was in fourth grade and editor of the Scan-Satellite school newspaper in Scanlon. He welcomes ideas for human interest stories and tales regarding Carlton County residents, projects, history, and plans c/o [email protected] KnotNews.com.