Rebels walk off on Lumberjacks 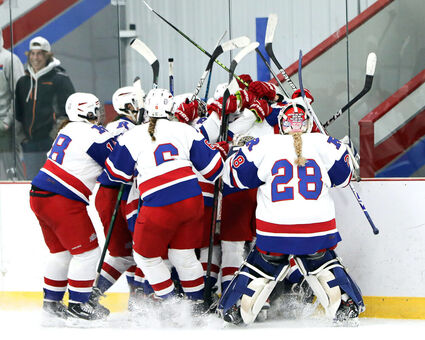 The spirited contest delivered, ending with a 3-2 MLA overtime victory.

The Rebels jumped out to a 2-0 lead before the Lumberjacks mounted a third-period comeback to tie the game at 2-2.

Things were not decided until the 2-minute, 32-second mark of overtime when Hallie Klavu netted the game winner to give MLA its fourth win of the season.

"This is such a special group of kids," said MLA coach Reilly Fawcett. "We have a young team, but at the same time we have an experienced team, and it is fun to watch them grow not only as players, but also as people."

MLA gained a 1-0 lead at 5:23 of the first period on a goal by Gracie Hartl with Megan Hattenberger and Sandra Ribich notching assists.

The Rebels extended their lead to 2-0 in the second period at 2:59 on the second goal of the game by Hartl with Hattenberger and Ribich assisting. The Rebels held that two-goal margin for the remainder of the period.

"Despite being down by a couple of goals I felt it was the first game we came out this season ready to play," said CEC coach Kennedy Houge, who took over as head coach this season. "I felt we had a higher percentage of zone time, but we had a couple of breakdowns that cost us."

Trailing by two entering the third period, the Lumberjacks came out on fire, resulting in a pair of goals. The first goal came with 4:47 remaining, off the stick of Reese Kuklinski with an assist to Emma Parks. Just three minutes later, and with only 1:38 remaining in regulation, Erin Loeb tied the score for CEC with assists to Kuklinski and Emily Litchke.

"Coming out to start the third period, I told the girls we need to play solid defense and keep them to the outside," Fawcett said. "CEC has a strong forecheck and they like to get it in deep and I told the girls to get back and worry about chipping the puck out, but they got a scrum out in front and a goal that got them going. You have to give them credit, they are a never-give-up type of team." 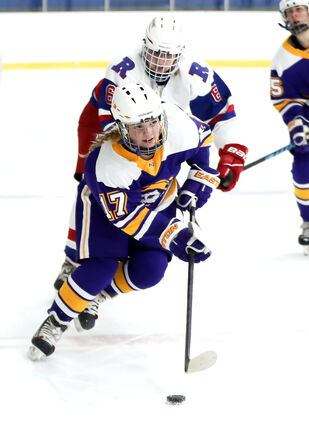 While CEC was still searching for its first win of the season, the Rebels were looking to add win No. 4 to the "W" column and got it when MacKenzie Hoffman won a draw to Autumn Painovich. Painovich slid the puck to the point to Klavu. Klavu walked down the wall and found an opening in the slot where she let a shot go that beat CEC senior netminder Araya Kiminski.

"The arena was packed, and it erupted," said Fawcett. "It was an awesome experience for our girls to be able to beat a good team and program like Cloquet."

Despite the loss, and her team dropping to 0-5 on the season, Houge is seeing improvement.

"Each game we are seeing the team bonding more and more," said Houge. "The lines are starting to mesh more and more, and we will just continue to work and get better."

CEC outshot the Rebels 26-19 as Mallory Hartl made 24 saves for the Rebels. Kiminski stopped 16 shots for the Lumberjacks.