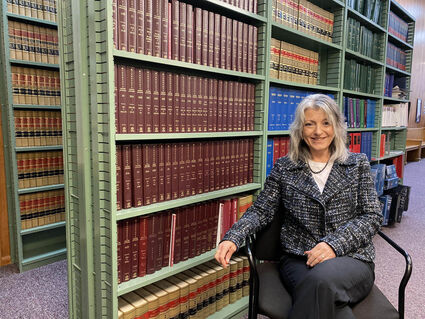 Joanna Wiegert is a full-time public defender in Carlton County, a job she grew into since moving to the area to practice law.

Thirty years ago, when Joanna Wiegert was entering the legal profession, having graduated from Valparaiso University, she found Duluth.

An outdoors enthusiast, Wiegert found that Duluth was smaller than her suburban St. Louis upbringing and less urban than the greater Chicago area where she'd gone to law school.

"I didn't want to go to a big city. I wanted something different," said Wiegert, 57. "But I wanted to do criminal law, so I had to go to a place that was big enough that they would have crime."

After a temporary law firm job in Duluth clearing a backlog of case files, she read about a troubled defendant who was being disagreeable with his public counsel.

That case wound up launching her 30-year career in the Sixth Judicial District as a public defender - the last year of it spent as a full-time public defender working out of the courthouse in Carlton.

"I called Fred Friedman and said, 'I will take this case; I will represent this client,'" Wiegert said, recalling that Friedman appreciated the call and told her he'd think it over. Three days later, he gave her a shot.

Wiegert helped see that troubled case to resolution. She spent numerous hours with the defendant at the local jail, developing a rapport and gaining a reasonable level of cooperation while working the case alongside the other attorney.

"The client wasn't calling the newspaper every couple days anymore complaining about his public defender," Wiegert said. "It was an invaluable learning experience as a young lawyer."

She spent the next 29 years as a part-time public defender while "paying the bills," she said, with her own law practice that centered around family law.

A full-time public defender now, Wiegert no longer works out of a private office next door to the Pine Knot News on Avenue C, where newspaper staffers would see Wiegert coming and going at all hours of the day.

"She's got the bug," Friedman said of Wiegert's passion for criminal law. "Her advantage was she liked her clients and she had the ability to get along with clients."

It's common practice for smaller urban areas to rely on part-time public defenders, Friedman said, which puts the onus on attorneys to fund their offices and staff. As it is now, Wiegert is one of two full-time public defenders in Carlton, which also uses three part-timers, an investigator, paralegal and administrative assistant.

This year, Wiegert closed 400 cases - but gets credit for more than 650 when you consider the weighted evaluation tool that makes distinctions between, say, processing driving without insurance violations and defending higher crimes such as double homicide.

Now residing in Cloquet, married eight years to a marketing professional, and entrenched as a northlander, Wiegert sat down with the Pine Knot to discuss her first year working out of her own office at the Carlton courthouse. The hour-long conversation has been abridged for length.

Q How are you enjoying the full-time position?

A It's going great. I have more cases, but the types of cases I handle and, frankly, the amount of time I spend on public defender work has not changed dramatically. What the transition did was eliminate all that private work. That freed up my time and my brain to focus more on my public defender caseload.

Q People might find it interesting you had a hard time getting your first job. A lot of us think once you pass the bar exam you have your pick of where you want to work.

A No, that is not the case. It was really a struggle. I wanted to do criminal law. That was my area of interest. And there weren't a lot of women practicing law, period, in the Arrowhead region at that time, much less doing criminal law. When I started as a part-timer down here in Carlton County, there was one other woman who did criminal work down here and she was with the county attorney's office. There were maybe four or five females besides me working within the public defender system in the region at all. I was an outsider. I didn't have ties to the community. I didn't grow up here or have family here. So it was hard.

Q What's the relationship between the public defenders and the county attorney's office? Do they only ever meet within the confines of a courtroom?

A No. Particularly in these small counties, we work so closely with one another that it's not uncommon at all for there to be social relationships. We work with one another on a pretty much daily basis. So, we go to lunch occasionally, we go have drinks once in a while, there's holiday parties, stuff like that.

Q So no firewall?

Q Do you see trends in cases?

A You always see trends. There's always kind of a cycle that comes through. Whether it's cycles of drug cases or what drug of choice is coming through. We'll have an influx of (methamphetamine) cases, or an influx of heroin cases or an influx of fentanyl cases. It just kind of depends on what the crime du jour is. If I'm going to look into my crystal ball, there's potential for more fentanyl cases to come in as it becomes a bigger societal problem. Things flow downhill, and if Duluth is starting to pick up more fentanyl cases, we're going to be picking up more, too. (Editor's note: Wiegert proved prescient, as days later the Duluth Police Department announced the breakup and arrests related to a drug trafficking ring responsible for distributing large quantities of fentanyl, meth and heroin throughout Duluth, Superior, Cloquet and the Fond du Lac Reservation.)

Q How prevalent are drug cases compared to the rest?

A Let me pull up my calendar for Monday (Dec. 5). I have seven cases on my calendar and four of those, more than half, are drug cases. That's pretty standard.

Q How many folks end up requiring public defenders?

A The number of cases, at least in Carlton County, where criminal defendants are represented by public defenders is overwhelming. I would speculate at least 75 percent, if not more.

Q What are the issues facing the public defender's office? Is there a lack of funding?

A There's always a lack of funding in the public defender's office. There is never enough money for us. We just went through contract negotiation and got a new contract and it was bad. It was a very heated, very confrontational discussion about what the defenders need versus the perception of the management hierarchy on how the district is funded. We have a state board that oversees the public defender system. There's a state board of public defense and a state public defender. The board appoints the state public defender. That's our managerial supervisor. The state legislature allots the money to the board of public defense and the board distributes it to the districts on whatever formula they use. We had a strike vote and that's the first time I've ever seen a strike vote come through or even serious contemplation for one.

A Almost everything is still online, everything is still on Zoom. Obviously, jury trials are live. Kind of the rule of thumb is if there's going to be live testimony, it's probably going to be in person. And then sentencings on cases as we say that are a 'presumptive commit.' So felony cases are sentenced according to the sentencing guidelines grid. There's an area on that grid where it's presumed that those sentences will be stayed and those people will be on probation. Then there's areas that are presumptive commits, where it's presumed those will be executed sentences with the Department of Corrections. So, any sentencing involving a presumptive commit is live.

Q What's it like to meet a person who is accused of a crime in jail?

A Well, it's just like meeting a person anywhere.

Q They must be happy to see you?

A Sometimes they are and sometimes they're not. I deal with clients on the worst day of their life. So, when I meet with a client in jail, I expect them to be nervous; I expect them to be anxious; I expect them to be upset. Either they're angry, or they're sad, or remorseful. I don't meet the real person. I meet this discombobulated, kind of screwed-up-having-a-really-bad-day person. And, contacts in the jail are not as fruitful as contacts outside of the jail. I would much prefer to get my client out of custody and deal with the case when they're out of custody than have them sitting in jail.

Q Shepherding someone through what starts as their worst moment to some sort of resolution, how does that make you feel?

A The idealized motivation is we're helping people and we're making their lives better and helping them get on track. I get a lot of fulfillment and motivation from the work that I do. Those success stories kind of carry you through.

Q Is a success story an acquittal or are there different types of success?

A No. A success story is not necessarily an acquittal. Acquittals are nice. Jury wins are nice. Dismissals are nice. They give us bragging rights and they're good for your ego, but the day-to-day stuff that carries me through is when you get that client who is really struggling in life and you get them into treatment, into a mental health facility or programming that's really going to help them. Or to find housing, to put them on track to get their driver's license reinstated ... Those are the things that, to me, make it worthwhile. Those are the success stories more than just jury wins.

Q Carlton County's new justice center will open in 2024. How is that going to impact the public defender's office?

A It's going to have an impact, because it's going to be hopefully able to accommodate the needs of the system. The building now is not physically capable of accommodating the needs of the system. It's not big enough, it doesn't have the security measures we need, or the physical space issue alone in this office. We're very blessed the county has agreed to provide space to the public defenders in this building. Not every district is like that. Not every county is willing to do that. In Duluth, their office is downtown and it's not in the courthouse.

Q Will your new office have enough workspace for everyone?

Q Does that mean you anticipate crime going up?

A I'm not sure I anticipate crime going up, but I do think there's a per capita correlation between crime rate and population, and if population is going to continue to increase then, yeah, there's going to be more crime.

Q When you're not lawyering, what are you doing?

A I have a lot of stuff I like to do. I'm an outdoors person. I like to hike. We do boating. We do canoeing. I have a kayak that I go out on, on a pretty regular basis. We have a cabin up north where we spend pretty much every weekend. During winter I like to snowshoe and cross country ski. We have snowmobiles we'll go out on. I'm a winter person.