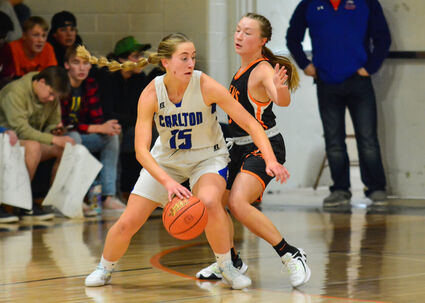 Carlton's Meg Matarelli makes a move to get around Frenchie Klimek during the game.

Carlton and Wrenshall opened their respective high school girls basketball seasons last Thursday, Dec. 1 in Wrenshall with the Bulldogs coming away with a 58-30 win over the Wrens.

"I was pretty happy with how we played," said Carlton coach Brian Hey. "I thought our defense played very well and we committed only eight total fouls in the game."

The Bulldogs slowly pulled to a 30-17 halftime lead as Megan Matarelli led all scorers at the break with nine points.

"We went into the game knowing we would have to try and stop (Madison) Asleson and (Eliza) DeCaigney," said Wrenshall coach Emma Grover. "We struggled with stopping Matarelli. Give her credit, she did a nice job as did their entire team."

Matarelli finished with 20 points, and was also joined in double-digit scoring by DeCaigney, who had 19 points, and Asleson with 12 points.

"We started with a man-to-man defense, but our biggest problem was our turnovers," Grover said. "We had 29 turnovers and you can't do that because that allowed them a lot of easy transition baskets. I just think we had too many first-game jitters."

Rounding out the Bulldog scoring were Korah Crane and Michaela Sundeen who finished with three and two points, respectively.

"Wrenshall is always tough and they are just a scrappy group of players," Hey said. "They got a little tired at the end of each half and that allowed us to pull away."

The teams were tied at 16 before Carlton pulled ahead.

Wrenshall got a solid effort out of Frenchie Klimek, who recently moved back to Wrenshall; she finished with 13 points. Janae Sjodin added eight, to go with seven for Liz Johnson and Molli Williams' two points.

Both coaches came away with optimism for the remainder of the year. 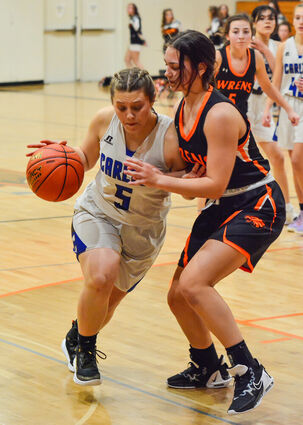 Carlton's Michaela Sundeen works to get past Wrenshall's Liz Johnson on a drive to the net during a Dec. 1 game in Wrenshall. The Bulldogs came out ahead, 58-30.

"I am happy we got the win," Hey said. "For the most part all our girls played well and gave us some things to build on. We have four girls who started last year and we have some others returning. We don't have a lot of bench, but we will keep working at getting better and developing kids."

Despite the loss to the next-door neighbors, Wrens coach Grover was equally optimistic.

"We definitely have a lot of potential and we will continue to work to get better," Grover said. "We may not have a lot of people in the way of numbers, but we have girls with a lot of heart and a lot of endurance and with our senior leaders - Sjodin, Klimek and Katie Line - I really can see this group playing some good basketball."

The two teams will meet again on Jan. 9 in Carlton for the annual Jug game and fans can expect both teams to be ready to do battle for the coveted trophy. It will be the last rivalry game before the schools pair up for basketball as the Raptors next season.