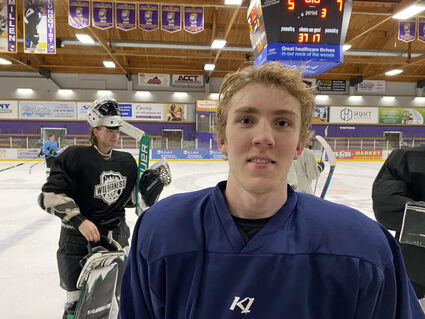 Gustavs Ozolins is leaving the Wilderness to join Team Latvia later this month in the World Junior Ice Hockey Championships in Canada.

A stellar week found the Minnesota Wilderness atop the standings, while saying a temporary goodbye to one of the team's premier playmakers.

Defenseman Gustavs Ozolins will play Friday's game in Chippewa Falls before leaving to join Team Latvia for the World Junior Ice Hockey Championships, which begins in Canada the day after Christmas.

Ozolins will fly to Riga, Latvia's capital city, to prepare with the national team, before moving on to Moncton, New Brunswick for the tournament.

It's the second national team experience for the 5-foot-11, 185-pound defender, having played in the world junior tournament last summer.

"It means everything to me," Ozolins said. "Growing up I watched a lot of Latvian hockey players playing for national teams, a lot of junior players older than me. I always looked up to them and now I get to experience it myself for the second time. It's a dream come true."

Ozolins also played for the national team last summer. Third on Minnesota with 12 assists, Ozolins is expected to miss up to six games.

"It's just part of the package of having good players on your team," Wilderness coach Brett Skinner said. "We're excited for him more than anything. It's a great tournament. He's played in it before. He's represented his country before and he's going to wear a (captain's) letter for his team most likely, so he's a good player for them."

Ozolins also played for Skinner last year with Sioux Falls in the United States Hockey League. Another Wilderness player, Oliver Stümpel, was awaiting word on if he'd made the Slovakia roster.

Ozolins scored a goal in Saturday's 4-1 road win over St. Cloud. Adam Johnson, a forward from Mahtomedi, Minnesota, also scored twice, and Duluth East alum Konrad Kausch made 31 saves in goal to lead the Wilderness. The team had been shut out a day earlier, losing 1-0 at St. Cloud while going 0-for-7 on the power play.

But the win, combined with a Fairbanks Ice Dogs loss to the Chippewa Steel, allowed Minnesota to claim sole possession of first place in the Midwest Division of the North American Hockey League. Minnesota (16-8-1) has 34 points, and has won seven of its last 10 games. The Wilderness are followed in the standings by Fairbanks 33, Chippewa 32, Kenai River 31, Janesville 30, Anchorage 27, Wisconsin 25, and Springfield 22.

"We're happy where we're at, but we recognize there's a long way to go," Skinner said. "It's a long season ... there's a lot of peaks and valleys along the way. More than anything we want to make sure we finish out the first half strong."

The Wilderness will play three games this weekend (Friday in Chippewa Falls, followed by a pair in Janesville on Saturday and Sunday), and two in Springfield, Illinois on Dec. 16-17 before holiday break through Jan. 6.

"There's going to be lots of time to get home and decompress," Skinner said. "Managing and making sure they stay focused the last few weeks is the priority right now."