Wrestling history is made 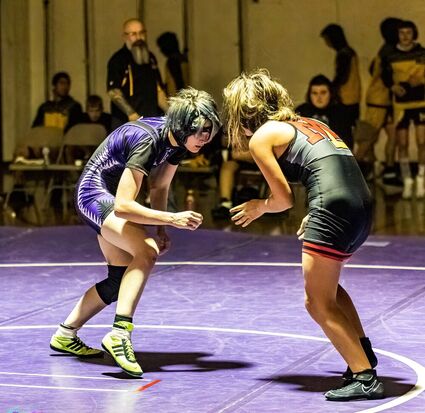 Ellie Evenson and Astro made a bit of Cloquet history Tuesday as the first CEC girls to wrestle against other girls in a match. The Lumberjacks lost the front end of a triangular to Mille Lacs Tuesday. Above, Astro, left, squares off against Nevada Brown from Mille Lacs on her way to a 12-1 win in junior varsity action.

Girls-only match is a Cloquet first

Wrestling fans were also treated to a groundbreaking event in the opener as two CEC female wrestlers took the mat against two Raiders girls, marking the first time that girls faced off on a Cloquet mat.

"As far as I know that is the first time that's happened," said CEC coach Al Denman. "We've had plenty of girls wrestlers, but this is the first time we've had them wrestling against other girls on our home mat."

Ellie Evenson and Astro, who prefers to be known by her one name, wrestled junior varisty for CEC, with Astro taking an impressive 12-1 win in her match and Evenson losing on a late first-

"Astro is athletic and very aggressive and she did a nice job in her win," Denman said. "Evenson is a senior and this is her first year of wrestling. I give her credit. It takes courage to come out and do this as a senior."

CEC had three wrestlers who won both their varsity boys matches. Eighth-grader Cavan Fjeld won twice at 106 pounds. Fellow eighth-grader Aiden Theisen also won twice, as did junior Warren Heitela. Fjeld was in the match of the day against Mille Lacs as he fought from behind and then scored in overtime to take the win.

"For Cavan to win in overtime in the first match and then to come back and pin his opponent in the second match was very impressive," Denman said. "Aiden is way ahead of his age as far as technical wrestling goes. He is very advanced. Warren is extremely athletic, very strong and when he gets a hold of you it is scary. He is like a black belt in his technique."

In the win against Proctor/Hermantown, Fjeld won with a pin at 106, then Theisen won on a forfeit at 113. Alex Comer lost a tough 120-pound match, but then the 'Jacks went on a roll as they tallied pins by Brenden Malloy at 138, Bo Fjeld at 145, Jack Horvat at 152, Aiden Reuvers at 160, and Heitela at 170. In all, the Lumberjacks wrestled nine wrestlers with eight of them winning - seven by pins with one forfeit. 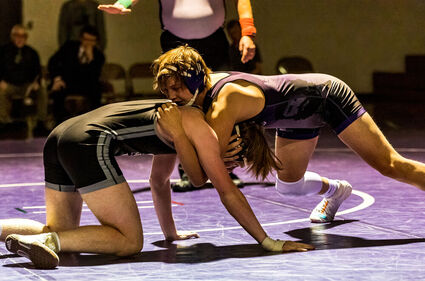 CEC's Warren Heitala, right, locks up with Proctor/Hermantown's Quinn Schnabel Tuesday as part of a triangular meet in Cloquet. Heitala won by pinning Schnabel. The Lumberjacks lost in the opener against Mille Lacs and then rebounded to defeat Proctor/Hermantown.

"That's an impressive performance," Denman said. "Proctor/Hermantown pounded us last year and we got some very big performances by a lot of guys who had wrestled junior varsity against Mille Lacs and then came up and got pins at the varsity level against P/H."

Denham said a key for the future of the program is the emergence of a large group of young wrestlers who are starting to see varsity level action.

"It is really good to see the young kids who are our future doing so well," Denman said. "Everyone is valued on the team and now they are starting to see how important their roles are. ... I am very happy with where we are at as a program. I'd love to have more numbers, but the kids we have are very dedicated."

Against Proctor/Hermantown, the Lumberjacks featured five eighth-graders, two ninth-graders, one sophomore and a junior. One of CEC's top wrestlers, junior Carter Horvat, was unable to wrestle due to injury.

"It is a long season and we want to make sure everyone stays healthy," Denman said. "We are seeing the mental toughness of our young kids right now and we are starting to see the payoff."