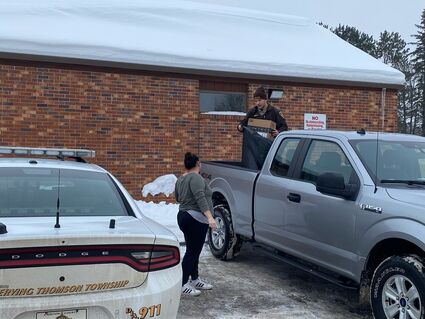 The Carlton County Sheriff’s Office was investigating a break-in at the Esko post office on Tuesday.

A sign on the window noted the post office was closed for the day, citing an “ongoing investigation.”

Lt. Dan Danielson and members of four squad vehicles from the Sheriff’s Office were on the scene late Tuesday morning. They were shuttling boxes in and out of the office, and speaking with residents arriving to find the office closed.

The sheriff’s office received a call early in the morning Tuesday, around 5:30 a.m., Danielson said, from a U.S. Postal Service employee who arrived and saw a suspicious vehicle.

“They made entry into the building,” Danielson said. “They broke in.” He declined to describe the vehicle, citing the ongoing investigation.

There were no broken windows or obvious signs of forced entry, but Danielson said an undetermined number of letters and packages were missing.

Local deputies are working with the U.S. Postal Inspection Service on the investigation, and asking neighboring businesses for surveillance footage they might have.

Social media reports began appearing Tuesday morning, wondering about the message on the door. The post office is located on Carlton County Highway 61 in downtown Esko.

A Postal Inspection Service spokesperson based in the Twin Cities area, Rachel Williams, said residents who receive mail from the facility can expect a letter within the next week or so.

“It’s my understanding that there have been other burglaries in that community, so it’s not unique to the post office,” Williams said.

Anyone who suspects missing packages or mail can file an online complaint for mail theft at https://www.uspis.gov/report, or call 1-877-876-2455 to initiate a report, Williams said.

No arrests had been made through Wednesday, Danielson said.