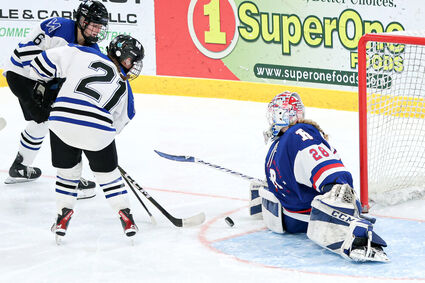 Entering this high school hockey season, expectations were high for the Moose Lake Area girls hockey team. So far, the Rebels have not disappointed, and sit with an impressive 9-3 record after dropping a tough game to Hibbing/Chisholm on Monday night.

Although young and smaller in numbers, the Rebels have a lot of varsity experience and some history.

After losing the opening game of the season to Breck, the Rebels reeled off eight straight wins including impressive wins over Cloquet-Esko-Carlton and Hibbing/Chisholm.

Ending their eight-game win streak, MLA was beaten by perennial Section 7A power Proctor/Hermantown, 7-1, in Proctor, but that loss was an opportunity to evaluate what the Rebels will need to work on as the season continues. On Monday, the Rebels faced Hibbing/Chisholm for the second time in a two-week period and lost 4-3.

"We learned a lot from the Proctor/Hermantown game," Fawcett said. "The players are constantly willing to learn, the coaches are willing to learn, and as a group we keep an open mind to learning more ways to get better."

While many teams are skating four lines and three sets of defensemen, the Rebels have three lines and two defensive units - which can put them a bit short in person-power.

"Our girls know the numbers game and they are smart about taking short shifts," Fawcett said. "They also know we have to be in better condition and they are willing to put in the physical effort to train and be game-ready. Every single player on varsity plays a period of junior varsity as well, so our conditioning has to be spot on."

The Rebels are led by a top scoring line of Sandra Ribich, Gracie Hartl and Megan Hattenberger.

"We have some pretty good balance as a team," said Fawcett. "Our second line is a very good and hard-forechecking line and our defensemen jump in on offense, so we don't have to rely on any one person."

In the net, the Rebels are fortunate to have sophomore Mallory Hartl who, according to Fawcett, has been sensational.

"Mallory has been phenomenal for us since she started playing varsity hockey," Fawcett said. "She keeps us in games and gives us a chance to win. That's what you need in a goalie."

Things will not get any easier for the Rebels. On the horizon are games with CEC, Gentry Academy, and two games against a strong Duluth Marshall team.

The Rebels will need to be on top of their game as all of those teams are good and can play a physical style of game. 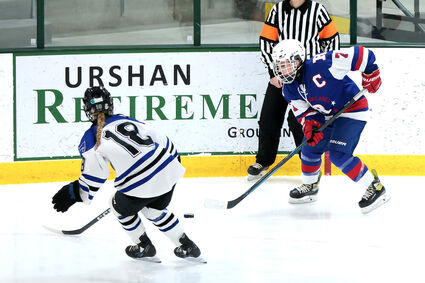 "There are people who think because body checking is not allowed in girls hockey that the game isn't physical, and that's just not the way it is," Fawcett said. "Our girls are gritty and a huge part of the game is body position. Jorja Jusczak is only 5-foot-2 and is one of our more physical players, and along with Gracie (Hartl) they win a lot of those one-on-one battles."

Next up for the Rebels is a Thursday game with Duluth Marshall. Marshall had won seven straight games entering Tuesday night's game against Grand Rapids-Greenway. The Rebels will play CEC in Cloquet at 7:30 p.m. Monday.

"We love having a tough schedule," said Fawcett. "A tough schedule will make us more battle-tested when the playoffs come around."