Bombers get back on track 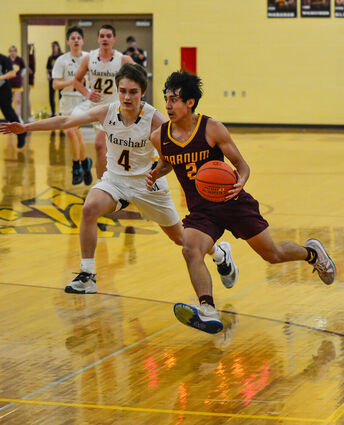 Barnum #2 Carlos Beckstrand drives hard to the basket around Marshall #4 Soren O'Rourke as the Bombers work to maintain their lead over the Hilltoppers Tuesday night in Barnum.

The Barnum Bombers are winning again. Although that's nothing new when it comes to boys basketball, the team entered Tuesday's basketball game against Duluth Marshall searching for itself a bit.

Marshall came in at 1-9, giving Barnum an opportunity to rebound from a loss last week against Browerville. Against the Hilltoppers, the Bombers indeed got back on the winning track with a 77-54 victory.

"Browerville is right now the top seed in the other half of Section 5," said Barnum head coach Rich Newman. "We think we are right there, and with a little work we are excited about the future."

Against Marshall, the Bombers had their hands full early in the game.

"They don't play like a 1-9 team," Newman said. "We had a small halftime lead and then pulled away later in the second half."

A big key in the first half for the Bombers was the play of point guard Carlos Beckstrand, who hit for 14 points to help keep the Hilltoppers within reach as the Bombers fell behind by as many as 10.

"We had a bit of a shaky beginning, and we just didn't have good flow in the game," Newman said. "But Carlos had a good night for us. He took care of the ball, he spread the floor out from his point guard position and just had a good solid game."

By the end of the half, the Bombers had righted the ship and found themselves up 33-26. In the second half, they outscored Marshall, 44-28, taking control of the game.

"This is a fun group to coach," Newman said. "We are young as far as varsity experience goes, but we are really working hard and I am happy with where we are at." 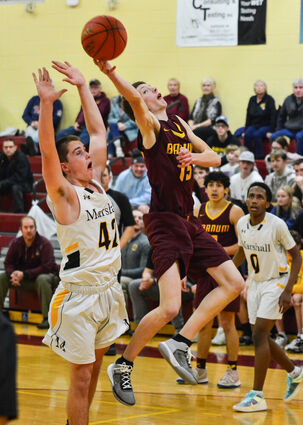 Beckstrand ended up with 21 points and so did Hayden Charboneau, who had a big second half with 12 points.

Also scoring for the Bombers were Brady Coughlin with 13, Layne Wickstrom 12, Brock Hurst five, Bryce Ferguson four, and Gavin Thiry with one point.

"We are still looking for that signature win, and maybe we can get that against Two Harbors in our next game," said Newman. "They are a good team that has been picked to be one of the

favorites in their section."

The win on Tuesday improved the Bombers record to 9-3.