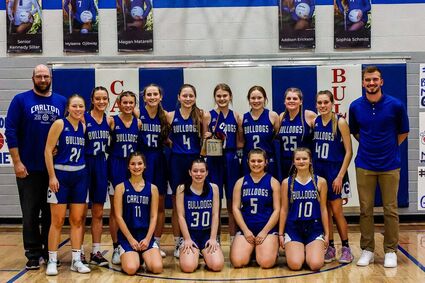 As she warmed up before the girls basketball jug game with rival Wrenshall Monday night, Carlton's Eliza DeCaigny admitted her blood pressure was a little high.

"Everyone's on the team was," said DeCaigny, a senior. "It was definitely nerve-wracking."

Stress aside, it was the Bulldogs that racked up the points, as DeCaigny scored 14 to follow teammate Megan Matarelli's game-high 20 in their 59-26 win to cap a long-standing rivalry. The two rural Carlton County schools' athletic programs fully consolidate beginning this spring.

For DeCaigny, it was not only the last jug game, but her first, as the 5-foot-7 forward did not play last year due to illness and the season before because the pandemic forced cancellation of the season.

Thus, taking plenty of celebratory cellphone photos with teammates, family and community members with the decorative jug afterward was all the more memorable.

"It was definitely special," DeCaigny said. "It will be something that I always remember."

Remembering back to why both the boys and girls jug games began is a bit of a fable. The first boys' date listed on the jug is 1951, while the girls' game goes back to 1980. Each annual matchup on the jug owner's home floor doesn't disappoint and this final go-round was no exception.

Monday's tilt stayed within a pair of possessions for the opening 15 minutes, until the Bulldogs began clicking late, taking a 21-8 lead into the locker room at halftime.

"We did a nice job not forcing the ball, slowing down and taking shots as they came," said Hey, who had nine Bulldogs score points on the night. "Hopefully, we can continue that."

With Matarelli and DeCaingy leading the way, teammates Maddie Asleson, Korah Crane, Brielle Simula and Michaela Sundeen all scored multiple times, snapping a nine-game losing streak this season with their second win over Wrenshall this winter.

"As the game went on, we got more comfortable," said DeCaigny, who confessed to gazing at the jug at center court during warm-ups. "We were focused, ready and playing pretty hard."

The Wrens, playing with a depleted roster indicative of why the schools are merging sports programs, did their best.

"It felt like anything and everything they put up went in," said Wrenshall head coach Emma Grover of Carlton. "They flat-out played really well."

Despite defeat, Grover's winless Wrens (0-8) have been increasing their skills on a daily basis, she said, including improved offensive and defensive execution and a willingness to shoot the basketball with confidence.

That was on display Monday when Wrenshall rifled up 66 shot attempts. Although erratic at times, their opportunities were often.

"We can't score if we don't shoot," said Grover, now in her second season on the sideline of her alma mater.

Shooting the most Monday for the Wrens was Janae Sjodin, who tallied 18 points, including half a dozen in the first half, and a dozen more in the second, to account for nearly 70 percent of the Wrens' scoring.

The 5-foot-8 senior forward was aided by baskets from Frenchie Klimek, Liz Johnson and Laura Rubesh, while Auna Johnson hit a free-throw, and seventh-grader Payton Heittola had her first-ever varsity score.

"Each game we can take something good away," Grover said. "If we just give it our all, that's a step forward. We haven't won, but they're believing in themselves and the opportunity is there."

Grover is a 2008 Wrenshall alum and past point guard, while Hey is a 1995 Carlton grad and former forward. Both coaches said the opportunity to become new-look Raptors when the two athletic programs soon consolidate is a good thing.

Roster numbers are a big reason. Carlton doesn't have a junior varsity team, while Wrenshall can't sport a JV or junior high team and had only nine players suited up on Monday.

"It's going to create a whole new level of play," Grover said. "And a realm of confidence." 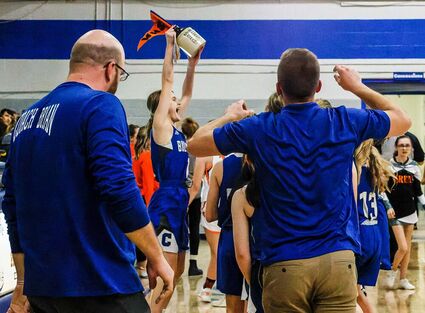 Sjodin smiled when asked about guarding DeCaigny on Monday. The pair played softball together as Raptors last spring played powderpuff football last fall in Wrenshall against one another. It's easily apparent the two teens are close buddies. Rather than let district lines divide their friendship, they've allowed combining as one to strengthen it.

Even so, Sjodin was sporting orange face paint, a jersey and pompoms, while DeCaigny donned her blue and white overalls in a school spirit-filled boys jug game Tuesday in Wrenshall that went down to the final seconds.

One jug in Carlton. Another in Wrenshall. Perhaps it's the perfect ending to a neighborly rivalry spanning seven decades, now complete.

"I'm glad to be a part of the last jug game," Sjodin said. "It was fun while it lasted. ... But it's time to work toward the future and do it together."