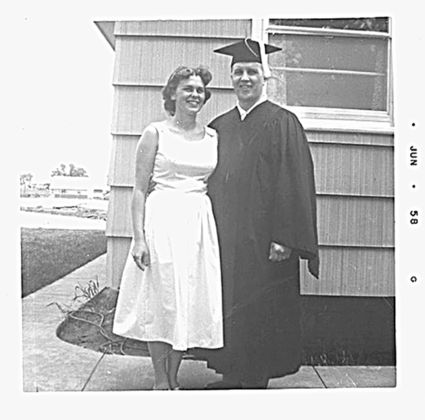 The picture always gnawed at Lynn Shaw. There she is, in 1958, posing with her brother and father next to their typical suburban Minneapolis home. The landscape is bare. Don Siiter is towering over his children.

And he is wearing a graduation gown.

"I was always bothered by a picture of me at 4 years old with my dad," Shaw wrote in an email to the Pine Knot News. Attached was the picture. "He said he did not have enough credits to graduate."

So why the gown?

Lynn, who is an educator with a doctorate, decided to take action. Her dad wasn't revealing much. So she called the University of Minnesota earlier this year.

A decades-old mystery was about to be solved.

Lynn and her brother Tom grew up and eventually both moved to California. Their parents followed. Don Siiter and Eunice Westlund are Cloquet natives who first resettled in the Twin Cities area. Don's parents ran Siiter Grocery. Shaw recalls visiting grandparents on Little Grand Lake and how everyone worked at the wood plant.

"You know that thing about Minnesota Nice," Lynn said while recalling her communication with the U of M. "They were truly nice." Within days, Shaw found out that her father indeed had gained enough credits as a journalism major. He was a university graduate but found out officially at age 88.

"I pretended I was a graduate," Siiter said recently. His wife and kids wouldn't find out his truth until later. So it wasn't a family secret that Dad hadn't graduated from the U. The mystery lay in the photo. "Why go to all the trouble?" Shaw recalls thinking.

"I kept feeling worse," Siiter said. His children went to college, got advanced degrees. Even Eunice eventually obtained a nursing degree. Here he was, degree-less. Sort of.

Siiter graduated from Cloquet High School in 1949. He and Eunice were "grade school sweethearts," he said. He got the journalism bug early while working for the school paper, the Pine Needle. The Pine Knot newspaper ran the high school paper within its pages, and its editor asked Siiter if he would like to write some sports stories for the community paper. He was paid, he said, a "handsome" 10 cents for each inch of writing.

At 17, he says he was mostly on his own. His parents had divorced and he was out to make a life for himself. He graduated from the Minnesota School of Business and then got a job as a sports editor at a suburban Minneapolis paper.

But Siiter had itchy feet, and when opportunities arose, he would take them. He had a few small stints dabbling in statewide sports publications. And there was also the war in Korea. He served two years in Japan and was with the Cloquet National Guard.

When he came back from overseas, he started attending the U of M.

So why no inquiry about his graduation status? He was busy.

If someone suggested he try out some venture, Siiter would likely take them up on it.

"I can sell," he said without reservation.

He worked for the Farm Bureau's publications and sold national advertising for the Minnesota Newspaper Association and the Carlson companies.

Then one day, a "sheet metal friend" asked him if he'd like to hawk his products. Siiter admitted he knew nothing about the heating and air conditioning business.

But he took up the offer, going on the road. His children ended up out west, and Siiter suggested the company open a branch in California. He and Eunice wanted to be near their kids.

In 2002, then in his early 70s, Siiter ventured out on his own. He's had a few HVAC product patents and knew his way around the manufacturing and distributing of parts.

And he's still at it. 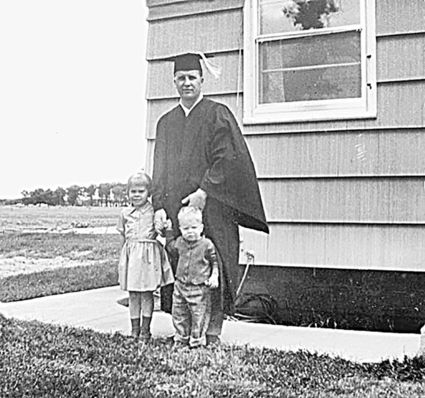 Don Siiter and his children Lynn and Tom, and wife Eunice, pose for his first "graduation" photos in 1958 at their home in New Brighton, Minn.

When asked about his daughter's happy discovery, he says, "I fell off my chair." You can sense the unburdening in his voice.

He has fond memories of his time at the U. "It was just my impression that I didn't have enough credits to graduate," he said. "I thought I'd come home and fake it."

He pauses a few beats. "I don't know why I'm telling my life story like this," he says, still sloughing years of nagging guilt.

Siiter has had a few education stints since 1958 but nothing that would spark an inquiry into his status at the U. "There was a breakdown in the system," Shaw said.

She and her brother decided to recreate the graduation pictures, using a bit of editing to place the current versions of themselves back at the house in New Brighton.

"He's so happy and proud of himself," Shaw said.

The same could be said for the daughter who finally cracked the case of the graduation gown photograph.