Love of the links started early for Cloquet golf legend 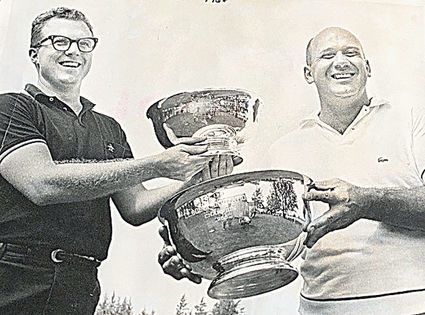 Butch was runner-up to Leo Spooner at the 1966 Cloquet Invitational.

For decades, the name Butch Newby was synonymous with Cloquet Country Club championship golf. I had the privilege of recently catching up with Butch while being joined in the phone conversation by Bill Manahan, the manager-pro at the club, and Dick Brenner, longtime CCC member and community activist.

Butch's given name was Harry Newby, Jr., but he has been known as "Butch" ever since he can remember. He was a very successful attorney in Cloquet and Carlton County, sharing an office for many years with another longtime club member, Dave Lingren.

Since 2002, Butch and his wife Jill have lived in Arkansas. He is afflicted with mesothelioma, but is battling it as if he were down one hole in a golf match - with very intense effort. At the time of the interview, Butch had recently completed mesothelioma-related hospital treatment in Houston and also in an Arkansas facility.

Butch grew up on 22nd Street in Cloquet. His dad, Harry Sr., was an incredible athlete as well, nearly qualifying for the Olympics as a sprinter and playing professional football for the Duluth Eskimos. His mom, Pat, and his dad were both excellent teachers and golfers. He said he got his first clubs when he was 12. His summers were soon devoted to golf.

Newby said he very quickly latched onto and became friends with Cal Carlson at the country club, who was a year older. They often would put sheets out on the practice fairway and for hours play games for pennies, trying to land balls from different distances and angles onto the sheet. He said the club greenskeeper, Carl Peterson, would get after him and Cal, asking why they weren't out swimming like other boys and girls rather than making divots practicing on the golf course.

By eighth grade, the 14-year-old became quite an accomplished golfer, and lettered, along with Cal, on the Cloquet High School golf team. By the time Butch reached 15, he had won the Minnesota State Jaycee tournament. That victory qualified him for a national tournament in Columbus, Ohio, where another golfing legend was present: Jack Nicklaus.

"Jack and I are only two months apart in age," Butch said. "But the similarity ends there." The golfer's paths would cross more than once in years to come.

Butch was also a very good basketball player. As soon as golf season ended, he was shooting baskets. The Cloquet Civic Center (on Cloquet Avenue where the fire station is now) had a great little gymnasium where area youth could sharpen their skills. His dad and Clare Hendrickson helped coach and groom some of this emerging Cloquet hardwood talent. His senior year, 1958, Cloquet made it to the state basketball tournament for the first time. In the first game at state, they were matched up against Austin, the eventual state champion. Cloquet lost by two points. In the consolation finals, Cloquet also lost by two points.

"Bemidji had a 6-foot-8 kid named Ray Cronk who eventually became a star for the Gophers and played professional basketball," Butch said. "It was a tough task for us since our tallest starter was 6'-foot-2. We lost two games at State by a total of four points. It was, however, a great and unforgettable experience." He was named the top scholar athlete at Cloquet High in 1958.

The high school golf team was nearly unbeatable during Butch's tenure. In 1957 and 1958, Cloquet had a streak of more than 25 match wins. They won district titles and qualified for state tournaments.

With junior championships looming, Butch got a letter in the mail from Les Bolstad, the coach of the University of Minnesota golf team, showing interest in his talent. When he was 18, he was invited to play - as an amateur - in the Keller Open, a tournament designed for professional golfers at Keller Golf Course in St. Paul.

Butch also qualified for the Minnesota Open, a tournament for the state's elite amateur and club professional golfers. He shot an opening round 69 that included birdies on 15, 16, and 17, and a par on 18. The media called Butch's score one of the best rounds ever in the tourney history.

"It was a lot of pressure on a young kid," Butch said. "And it showed for my next two rounds weren't nearly as good. Still, great memories."

Butch considers being named captain of the 1962 team one of his most gratifying golf accomplishments. That year, he won the first of his 13 club championships at Cloquet Country Club.

Butch emphasized how fortunate he was to have a supportive wife and family that allowed him to get on the fairways so often.

"I worked about 70 hours a week and took my vacation on the weeks of three-day or more golf tournaments," he said. "Jill encouraged me to go to golf events and stuck with me through thick and thin. It meant more responsibility for her when I was gone, caring for our three kids. All of my opportunities and success was due to her and my family." 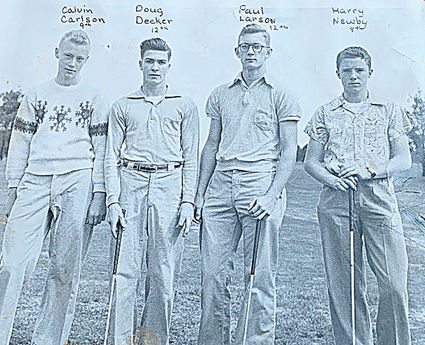 The Newbys celebrated their 58th wedding anniversary at the Cloquet Country Club in July this year. Butch and sons, Logan and Joel, played in the Cloquet Invitational. He hadn't played in the tournament for about 15 years. Butch said that he was touched that many friends, attorneys, judges, classmates and others came to say hello.

Butch is proud that the Cloquet club has endured and thrived as well as its youth program that fuels successful high school teams. It was one of Butch's goals to see the course expand to 18 holes, which it did in 2001. Joel Goldstrand, who designed the back nine holes, was a friend and golf competitor. Butch chaired the club's Greens Committee for about 20 years, including during the expansion, and also provided legal advice.

The course itself is a reminder of the years and rounds gone by.

"It was so much fun to see pine trees that I may have planted 50 years ago now standing tall in all their grander. Very impressive," Butch said.