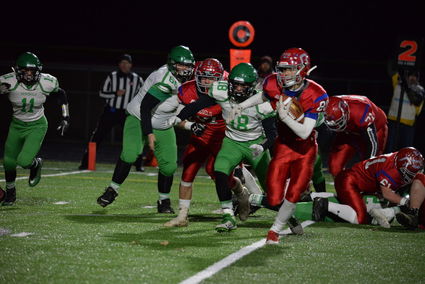 Paynesville entered Friday's matchup with Moose Lake/Willow River averaging 38 points per game while allowing only 11 points per game. With that said, it was the Bulldogs who used Rebel mistakes and miscues to their advantage as Paynesville defeated ML/WR 56-8 in the state Class AA quarterfinals in North Branch.

Seven Rebel turnovers led to short fields and even shorter drives as the Bulldogs built a 12-0 lead after one quarter of play. Three more second-quarter touchdowns, and the Bulldogs led 32-0 at the halftime break.

The Rebels - who fumbled four times and were picked off three times - had longtime coach Dave Louzek scratching his head.

"I don't think I can ever remember that many turnovers for us, unless you go back some 20 years," Louzek said. "We just didn't get things going in a positive direction, but we can use this loss as a motivator for next season."

Grady Fuchs led the Bulldogs with three touchdown runs of 19, 5, and 2 yards; he also threw two touchdown passes to senior wide receiver Levi Blast, connecting on passes of 51 and 54 yards.

"Not only the turnovers killed us, but we had mental breakdowns," Louzek said. "A touchdown that didn't count - that was called back due to a penalty - and our defense let them have too many big plays." 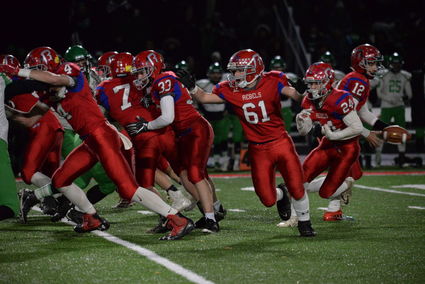 The Rebels, who trailed 56-0, saw their only touchdown when Jordan Fjosne scored on a 5-yard touchdown scamper. Then Eli Werner converted on the two-point conversion to make the final margin of victory of 48 points - the biggest lopsided loss in many years for ML/WR.

The Bulldogs' balanced attack finished with 532 offensive yards: 295 through the air and 237 yards on the ground.

MLWR closed the season 8-3. They had only three senior starters this year.

The Bulldogs moved into the semifinals against Minneapolis North.