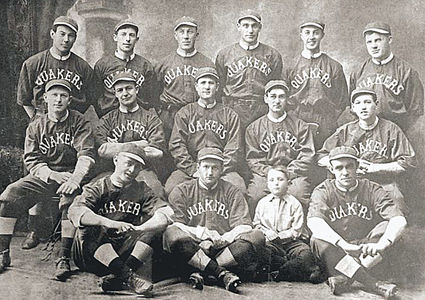 More than 100 years ago, a member of the Fond du Lac band pitched six innings for the Chicago White Sox … the same year he was deemed “unqualified” to play for the Cloquet baseball team.

His name was William Cadreau. The right-handed pitcher is listed in the 1889 Census Roll of the Fond du Lac Band of Chippewa, a 1-year old boy born to Antoine Cadreau and Louisa Naganab on Sept. 2, 1888, in Cloquet. William’s lineage appears to show he is the grandson of Chief Naganab of Fond du Lac, who signed the Treaty of 1854 in Washington, D.C.

Little could be found about Cadreau’s personal life or growing up on the reservation in the 1890s.

Baseball cherishes its historical statistics and the stories surrounding them. So while details of Cadreau’s life are sparse, it’s not so difficult to find a history of his pitching record.

In the summer of 1909, Cadreau pitched impressively for the Ada and Fosston town baseball teams in western Minnesota near the White Earth Reservation.

Several references state that in the spring of 1910, when Cadreau was 21, the young pitcher had a tryout with the Cloquet baseball team but was deemed “unqualified” by the Cloquet manager. In all likelihood, and knowing what was to come for Cadreau, prejudice was the reason for his not making the squad.

That didn’t deter him. That same summer, he pitched for short periods of time on the Iron Range; in Minot, North Dakota; and then Ashland, Wisconsin.

While in Ashland, Cadreau pitched several great games, including three consecutive wins with a 17-strikeout, no-walk complete game gem against Bayfield on Labor Day and 15 strikeouts against Mellon a few days later. He had a 19-strikeout game in Duluth as well.

These performances caught the attention of at least one major league team, the Chicago White Sox. Owner Charles Comiskey sent a representative to northern Wisconsin to give Cadreau a tryout and possibly sign Cadreau and bring him to Chicago. He was given a contract.

For some reason, the White Sox often referred to Cadreau as “Chief Chouneau.” It might have been something as simple as misinterpreting handwriting, or a Comiskey publicity stunt.

In the book, “Native Athletes in Sport and Society” (provided by the Fond du Lac Cultural Center), author C. Richard King says many native baseball players were referred to by the derogatory use of “Chief.” Probably the most famous was Charles Albert “Chief” Bender, whose career included three complete pitched games in the 1911 World Series. Bender, born in Crow Wing County, Minnesota, was a star and future Hall of Fame member playing at the same time Cadreau was making his Major League debut.

On Oct. 2, 1910, Cadreau took the train from Ashland and then met up with Comiskey and American League President Ban Johnson in Mercer, Wisconsin, for the ride to Chicago. After spending a few days in Chicago, Cadreau was given a workout by White Sox manager Hugh Duffy. Soon thereafter, he was chosen by his manager to be the White Sox starting pitcher against the Detroit Tigers on Oct. 9, 1910, the final game of the regular season for both teams. The Tigers were the defending champs of the American League, led by two great hitters who both ended up in Cooperstown: Ty Cobb and Sam Crawford.

So here is young Cadreau from the FDL reservation making his Major League pitching debut at the brand new 32,000-seat Comiskey Park in Chicago — “the baseball palace of the world” — against eventual baseball Hall of Famers and the defending American League Champs. Riding in a train with baseball immortality to the Windy City was a far cry from Ada, Minot, Athletic Park in Cloquet or the ballfield on Reservation Road by the church.

For the record — and baseball keeps incredible records — Cadreau pitched marvelously. He pitched into the sixth inning, giving up seven hits and two earned runs. The White Sox lost the game 2-1, so Cadreau was the losing pitcher. The big hit for the Tigers came off the bat of Sam Crawford: a triple. It was no embarrassment for Cadreau to give up the triple. After all, with more than 300, Crawford is still to this day the Major League leader in career triples.

Regrettably, but not surprisingly, the Chicago papers printed some ethnic comments, such as those by columnist I.E. Sanborn, that Chief Chouneau “learned to pitch curves by throwing tomahawks” or that he “sprinted to and from the mound between innings like he was chasing rabbits.” But Sanborn also stated that Cadreau seemed to be a “promising hurler, his control perfect, and his delivery clean and forceful.”

It appeared Cadreau was destined to have a fine career with the White Sox.

It never happened. It was his first and last appearance in the majors. Like the famous Moonlight Graham in the movie, “Field of Dreams,” Cadreau played but one game in Major League Baseball. After the season, he was released by Comiskey to the Grand Rapids (Michigan) Black Sox. He never showed up.

Cadreau threw pitches in 1912 for the Spokane Indians in the Northwest Pacific League. He had a great season there, making 46 appearances with 21 wins and 11 losses, and 309 innings pitched. The next season he won 15 and lost 15 for Spokane. There are no records that I could find to indicate that he stayed in Washington in the off seasons or came back to the reservation. He did work, while in Illinois, for the Chicago and Northwestern Railroad Company.

Cadreau pitched in Canada in 1914 and 1915 for the Saskatoon Quakers in the Western Canada League. He bounced around for a few years in the minor leagues and occasionally came back to pitch in Virginia and Duluth.

Early in 1917, he pitched a few games for the Chicago Union Giants, a Negro League team. Few Indians, Cubans, Asians, or Hispanics played for Negro teams — it could seal a player’s fate to then be banned from the white Major Leagues. A little-known fact is that between 1884 (Moses Fleetwood Walker) and 1947 (Jackie Robinson), William Cadreau became one of a few ball players to have played in the basically all-white Major Leagues and an all-black team.

When the United States entered World War I in 1917, Cadreau enlisted in the aviation department at the Kelly Field base near San Antonio, Texas. He mostly played baseball. He was 29 years old by then. Kelly was the forerunner of what would be called Kelly Air Force Base. Cadreau flew hundreds of miles across Texas to take part in games. He was honorably discharged from the military in 1919 and joined a team in the Texas League.

His final stint in minor league play was with the Superior Shipyards.

The 1920 U.S. Census found William Cadreau living in Ashland, Wisconsin, with his wife Eliza and her mother and father. In addition to Ashland, William is also making mound appearances for the Cloquet and Duluth semi-pro baseball teams.

This is where baseball pitcher William “Willie” “Chief” “Nitchie” Cadreau’s pitching and other records end.

In 1938, he was playing amateur ball and was a fishing guide in eastern Wisconsin. By 1946, he was back on the Fond du Lac Reservation. He died on Sept. 17, 1946, at 58 years old. His Pine Knot obituary stated that “Death Tuesday night claimed Cloquet’s outstanding contribution in the world of Professional Baseball.” He is buried on the Reservation close to where his grandfather is also buried.

Undoubtedly, William Cadreau had to face racism and other obstacles, but baseball must have been such a tremendous passion for him that he survived and even thrived in breaking ethnic barriers and fulfilling his dreams. Six months after his death, Jackie Robinson played his first game in the Major Leagues.

Many thanks to Matt Martineau and director Jeff Savage of the Fond du Lac Museum and Cultural Center on Big Lake Road, historian and writer Christine Carlson of Nickerson (who wrote a story on Cadreau in 2014), and Amy Utech of the Carlton County Historical Society for all their help with my research.

Carlton County has had its share of talented athletes

Over the years, Carlton County has had its share of great teams and athletes. There have been numerous individual and state high school champions. Several county sports stars have gone on to become tremendous college competitors and even a few were All Americans and Olympians.

When it comes to professional athletes, the list and number gets substantially reduced. 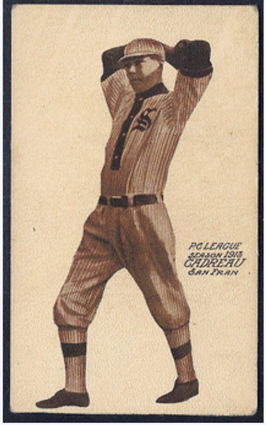 Residents might correctly first think of hockey players who have donned the Lumberjack uniform and played at the Cloquet ice arenas. Household names such as Jamie Langenbrunner, Corey Millen and Derek Plante played in the National Hockey League and even brought the Stanley Cup to Cloquet for viewings and pictures with local hockey fans. Cloquet’s first professional women’s hockey player, Sadie Lundquist, brought the Isobel Cup this past summer, after being part of the Minnesota Whitecaps, National Women’s Hockey League champions. And there are hockey players who have played professionally in the U.S. and abroad.

Over the years, there have been several members of the Professional Golfers Association, including current Cloquet Country Club PGA pro Bill Manahan, Glenn Hagberg of Madden’s on Gull Lake, Andrew Castle of the Chaska Town Course, and Dan Walker of Black Bear Golf Course in Carlton.

Readers are welcome to send us the names of those who may have been missed, [email protected]