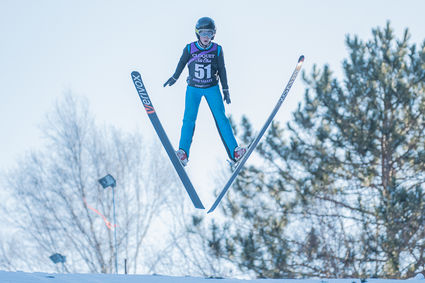 Ski jumpers and Nordic combined racers from Chicago, the Twin Cities, Coleraine and Ishpeming, Michigan made their way here Saturday to compete in the first Central Division competition of the season at Cloquet's Pine Valley.

Out-of-town jumpers were astounded by the amount of snow in northern Minnesota. St. Paul's Joe Berens was the official Central Division coach on site Saturday, and called the conditions "wonderful."

More than 2 feet of snow was certainly a good thing for jumping, as the landings at the Joe Nowak Ski Area were nicely groomed. Conditions were not so great for Nordic skiing as fresh snow made for slow racing, said 13-year-old Maxim

Glyvka of the Norge Ski Club.

Glyvka was one of only two skiers to jump off the 40-meter jump Saturday, along with Norge teammate Sandra Sproach.

There's a long tradition of ski jumping in this community, which is one of only two cities in Minnesota outside the Twin Cities area with active ski jumps and a local club (Coleraine is the other).

Longtime Cloquet High School ski coach and teacher Joe Nowak - a Duluth native who had jumped in international as well as local competitions - helped put Cloquet on the ski jumping map in 1960, when he convinced the Northwest Paper Company to donate land to build some proper ski jumps.

Long story short, he was successful. Once the city accepted the 40 acres of land (now home to the Pine Valley ski jumps and trails along with two hockey arenas), Nowak - with lots of help - went to work clearing trees and brush and erecting a temporary wooden jump in the fall of 1961. The park became a hub of activity in the winter months, both for competitors and kids who liked to be outside. There was downhill skiing (where the tubing hills were in recent years), ski jumping and Nordic skiing on the trails that meandered up and down the hills there. In the 1960s and '70s, Cloquet skiers won seven individual jumping titles and 12 jumping team titles, thanks to the facility at Pine Valley.

Today kids (and a few adults) are still jumping off the same 20- and 40-meter jumps that were built with donated steel and volunteer labor in 1963.

A number of Cloquet skiers took first place for their age groups and gender in jumping this weekend.

First-place medals were claimed by the following competitors:

Cloquet's most elite jumpers and skiers, Aidan and Charlotte Ripp, didn't compete Saturday, as Aidan was in Park City, Utah, at the Nordic Combined Continental Cup and his younger sister - a freshman at Cloquet High School - was sick. Both may have outgrown the jumps at Pine Valley.

Glyvka and his dad, Oleg, have made the drive to Cloquet for several years now. Oleg, a former Ukrainian national ski jumping coach, greets familiar faces with a hug, and is happy to talk about his son's progress.

Maxim jumped on two 120-meter hills, one in Wisconsin and one in Steamboat Springs, Colorado. He competed at Junior National Championships in Park City, where he didn't do his best jumping.

He placed third on a 70-meter hill at Norge this fall, without snow, in the U16 class, against the national champion (who placed first).

"Last year was probably one of the most phenomenal years I'd ever had," said Glyvkka.

He still likes Cloquet, though, its crazy 40-meter jump and the beautiful park that surrounds it.

"The people here are really awesome," Glyvka said. "They make me feel like I'm welcome here. I really appreciate it."

It's a low-key place to compete, with homemade cookies for sale in the concession stand and medals made of freshly cut round wooden discs with the places written in marker.

And the kids keep showing up, generation after generation. 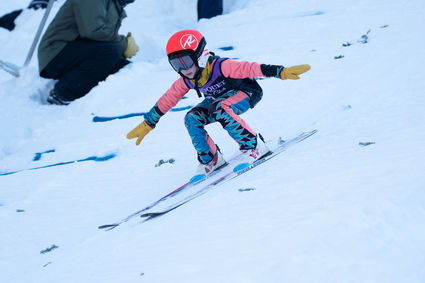 Cloquet's Ephram Marc lands a 10-meter jump Saturday. Marc placed third in the U10 age group for jumps and fourth in Nordic combined.

On Saturday afternoon, after the jumping and the races were over, two of the youngest female jumpers were lying on the mattress landing pad of the club's ski jump simulator, gazing out the window at the jumps and debating whether the red drips were paint or blood.

Definitely blood, they decided, then turned their attention to other matters.

"I started jumping when I was 3," announced Frances, who is 5 years old, a veteran of the 5- and 10-meter jumps already.

Luella Marc has a whole year on Langer, but said she decided to stick with just the 5-meter jump on Saturday. After all, she's still getting her jumping feet this early in the season.