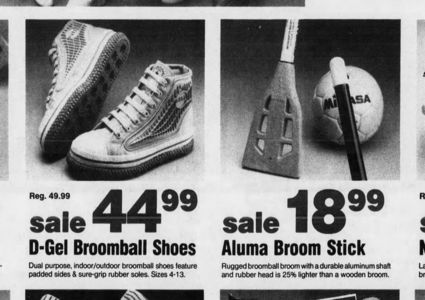 Broomball gear went high-tech in the 1980s with more specialized shoes and sticks, as seen in this sports store circular.

In the late 1970s and early 1980s, the hockey rink at Cloquet's Athletic Park on 14th Street was a hopping spot. Ice skates weren't always required.

On Monday evenings from January until March, the rink was reserved for broomball. Cloquet Community Education, led by director Gary Welton, organized and conducted a men's broomball league. Teams were mostly from Cloquet but there were some from Brookston, Grand Lake and other nearby communities.

The Cloquet Broomball League was unique in that nearly all games were played outdoors, even if temperatures were below zero.

Now even though this game was played on ice with hockey boards, the only person on the rink wearing skates was the referee. Players initially wore tennis shoes or light Sorel boots on their feet. The game is very much like hockey, but rather than shooting pucks in the opposition's goal with hockey sticks, the object was to shoot in a ball - a little smaller than a soccer ball - into the opponent's goal with a broom.

When the Cloquet league first started, there were eight players allowed on the ice from each team. After a few years, the rules were changed to six on the ice, two defensemen, three forwards and a goalie, very similar to hockey.

A broomball goal is 6 feet high by 8 -feet wide - substantially larger than the standard hockey goal, at 4 feet high by 6 feet wide. Like soccer, the goalie is the only player who can advance the ball with their hands or catch it.

"We actually did use straw brooms when we first started," said one of the original all-star goalies Dave Johanson. "The park board hated it when we left straw on the ice."

That was one of the reasons Mondays were chosen for League night. The park board did not work on Mondays and the players were responsible for clearing the rink of snow usually before - and sometimes during games - if conditions required. Players who lived close by even brought snow blowers after a storm.

Johanson said that many players were introduced to broomball by then Cloquet High School teacher and hockey coach Bill Kennedy during the school's Winter Fest. Kennedy, who passed away last month, would referee and sometimes play in tournaments pitting the various grade teams against one another.

Although body checking is not allowed in some broomball leagues, it was overlooked in these high school events and subsequently in the Cloquet league.

Equipment evolved over the first few seasons. Most players wore shin guards over long underwear with sweatpants covering both. Few wore protective helmets other than goalies.

In the early days of league play, Brookston players found a pair of rubber boots on sale at Johnson Company on Cloquet Avenue.

"They had a material on the bottom similar to sandpaper," Johanson said. "Brookston players bought all the pairs available in the area." He said they were already a fast team and with their new boots, they were running faster than all competitors. To combat this, some players from Cloquet went to the St. Paul Winter Carnival and found out there were actual broomball shoes. Subsequently, most players found a way to purchase these specially designed shoes with special suction-cup soles on the bottom to give additional traction on the ice.

Scanlon's Gary Ross said he went to Northwest Outlet in Superior in the early stages of the league, and bought Christmas presents for his teammates: specially designed regular broomball brooms.

"They were thick handled brooms with the bristles dipped in plastic. No more straw left on the rinks and a lot more powerful shots," Ross said. Molded plastic headed "brooms" were also introduced at this time.

Ross also described some of the original balls they used. "We were playing in a Brookston tournament with the rink set up on the frozen St. Louis River," he said. "It was Super Bowl Sunday and 38 degrees below zero when I woke up. With the first shot of the game, our ball disintegrated. That's when we learned there were official broom balls."

Rick Stowell said when he first started playing with the updated brooms and equipment, goalies did not always wear protective face masks. He remembered being on a forward line with center teammate Tom Marciniak.

"Tom (aka Maynard) had a very hard, accurate shot," he said. Tom took an opening face-off, scampered down the ice and ripped a shot at the goal. He hit the goalie right in the face and he wasn't wearing a face guard. "Once they escorted the injured goalie off the ice, his replacement was wearing a helmet and face shield," Stowell said.

Johanson kept the records for the teams and wrote broomball stories for the Pine Knot, keeping Cloquet area residents in tune with league results and individual scoring leaders.

The league grew from four teams in the late 1970s to eight teams and two divisions in the 1980s. The team sponsored by Al's Place Bar in Sunnyside (where Kwik Trip is located now) were perpetual league champions. Many players practiced hard between games and became very proficient shooters. The Cloquet league usually sent one or sometimes two teams to the Minnesota Recreation and Parks Association-sponsored state tournaments. Al's Place lost two years in a row to Brown's Ice Cream of Stillwater in the state semifinals.

In 1979, with an overall record of 21-2, Al's won the coveted state broomball title. They beat Country Club Market of Inver Grove Heights 2-0 in the championship game. Al's had 27 shots on goal for the game versus nine by the Country Club.

The next season, Al's Place split into two teams with Al's sponsoring one and Lemon Tree Liquor as the other sponsor. The Lemon Tree was the stronger of the two teams and won the 1980 state tournament. So, Cloquet league teams won the broomball titles two years in a row. Not bad for players that had been swinging at volleyballs with straw brooms a few years earlier.

"Our Al's Place (and Lemon Tree Liquor) overall Cloquet league record from 1977 to 1984 - total of eight seasons - was 88-2," Johanson said. "Our overall records, including regional and state tournaments, was 139-20." That is impressive.

I'm not sure why, but the Cloquet league dissolved and has now been dormant for more than 25 years. I imagine the rest of the state's competitive broomball teams are thankful.

Steve Korby's interest in writing goes back to when he was in fourth grade and editor of the Scan-Satellite school newspaper in Scanlon. Steve welcomes human interest stories and tales regarding Carlton County sports, residents, projects, history, and plans.