State bound! After 30 years, the CEC boys are going back to State 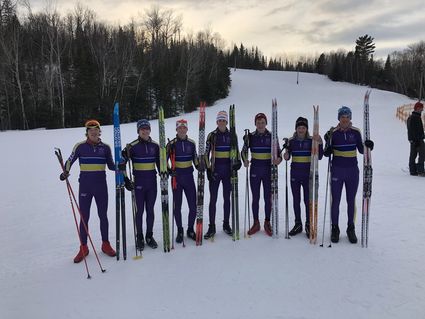 For the first time in almost three decades, the Lumberjacks boys Nordic ski team is headed to State.

With almost perfect conditions - the snow just right, and temperatures in the low 20s - four Lumberjacks skiers finished in the top 15 at Thursday's Section 7 meet at Giants Ridge in Biwabik.

Benjamin Bauer finished in third place, while Josh Sanders took ninth, AJ Maijala 12th and Cale Prosen finished in 14th place. The combined scores of CEC's top four skiers added up to 366 points, good enough for second place to Ely's 385 points and a trip to State, as the top two teams from each section advance to the state meet as a group.

AJ Maijala may have skied his best race of the season, racing right to the finish line against Duluth East's Josiah Thomas.

"I knew that it was the race that had to really put it all out there, just teamwork really motivated me," he said. "I've never felt so close to a team like this."

Of course, being neck and neck with Thomas also helped light a fire.

"He was Duluth East and that's who we thought we're gonna have to beat to make sure we got to State," he said. "I knew if I could get that guy, it probably meant we were going to State so I just put everything out there at the end."

"Our team has talent, but work ethic is what lets a team rise to the level we have risen to," he said. "It has been my goal and our team's goal to make it to State for a long time, so it feels good to know our hard work paid off and we finally accomplished what we've been working toward."

The fact that Bauer and Sanders competed at State last year also helps.

"It takes some of the nervousness out of State, not being my first time," Sanders said. "And it's so much more fun to go as a team than as an individual, having everybody else there really changes the feeling of it all so I was really happy we made it as a team."

While the top four skiers brought in the points, the following three skiers also had a job to do: race as fast as they could to beat skiers from other teams, giving them fewer points.

Spencer Hoeffling - the only senior in the top seven - placed 23rd at sections, while Henry Slater took 33rd and Miles Fischer placed 42nd.

They beat out their share of other skiers, while struggling with added issues, as Hoeffling had back problems, Fischer was recovering from illness and Slater had to put his skis back on after the bindings came away in a fall. He'd been having a race up to that point.

"I took a corner and slipped," Slater said. "I looked down as I started to ski again, and I didn't have skis on my feet. So I had to take the bindings off my boots and slide them back on my skis. It added like a solid minute and a half to my race, which was pretty disappointing because I got passed like nine times."

He'll be ready Friday though, as will Hoeffling - his back was better on Monday - and Fischer, who has recovered as well.

It's a deep team, so having every skier at the top of his game may bring some surprises Friday.

"You never know when your fifth skier might end up being your third skier," Maijala said. "While Benjamin has consistently been at the front, all the others have sort of traded places throughout the season."

It's a tightly knit team, particularly the top five skiers, who all race Junior National Qualifiers with volunteer coach Ben Croft - a longtime Nordic coach and waxing master - in addition to their high school season.

"He's so dedicated to this sport," he said, telling how he returned from the state cross country running meet where Bauer was an alternate and found Benjamin running on the trails at Pine Valley with his ski poles the same night. "Wow, that's why he's where he's at. And just his character and what he does is contagious to the other guys."

They also complement one another.

"Josh Sanders is the more organized guy. If they're going to go somewhere, he'll have the agenda and what they're going to do and time and everything spelled out," he said. "I think my son AJ is more that kind of laid back, make-it-fun kind of guy. Spencer is the designer, he's very creative and he's just a leader. And they're all musical, it's a good group."

Hoeffling credited the training the five did before the season, paddling canoes in the summer, traveling to Michigan to ski before skiing started, for making them - and him - better.

"This is like the best team I've ever been on," he said. "Coming from Carlton, sometimes you don't even have enough people to make up a full team. So it's really cool to actually have a competitive team and actually work for your spot and be able to score."

The last time the CEC boys Nordic team made it to State as a team was in 1991, under coach Brent Smith, said Blu Bong, noting that the team also went to State in 1990.

At that time, Bong was a sophomore. Now his son, Nate, is a junior on the Nordic team. 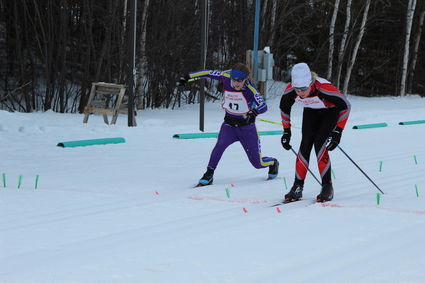 The girls team placed fifth at sections, with freshman Charlotte Ripp (pictured) missing a trip to State as an individual by two spots. "Just to have them place top five is so nice to see; they made a statement there," coach Maijala said, noting that they will return all but one of their top skiers next year.

Bong said the CEC team took third at State in 1991, but should have taken second.

"One of our skiers got on the lap track and thought he was on the course, so he had to go all the way back and start that race over," Bong said. "We only lost to the second-place team by a matter of seconds, so everyone knew we should have won."

That won't happen this time.

The state meet was held at Giants Ridge then, but the course has been changed as well as the structure of race. And the CEC boys are ready, and familiar with the course.

"I just want to ski my best and put everything out on the course," Bauer said. "This is our biggest race all year, and I want it to be our best race."

The boys headed left Thursday for the meet at Giant's Ridge, which was pushed to Friday because of frigid temperatures Thursday. The coach said he would give them the same advice he always does.

"I just tell them to go and do what they always do," Coach Maijala said.