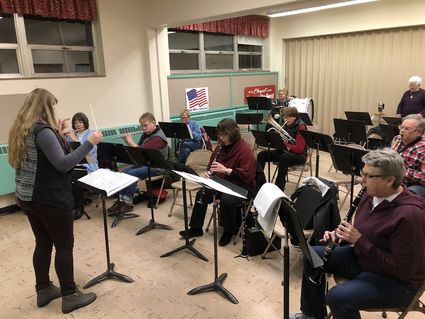 Chantelle Danderand directs members of the Cloquet Community Band at a practice at the Cloquet Presbyterian Church last month.

It had been decades since Becky Dooley of Cloquet had played a clarinet, but she brushed off her rusty skills and joined the Cloquet Community Band after she retired a couple of years ago.

"I hadn't played the clarinet for 35 years," she said. "I used to play in middle and high school. I got a book and relearned, and then I joined the community band."

Dooley became more involved when Carol Risdon and Gene Risdon, who had managed and played in the band for 21 years, retired at the end of last year.

"As part of the organization, I volunteered to be the president of the Cloquet Community Band," Dooley said.

The band began in 1999, 21 years ago, and has performed 18 winter concerts and 20 spring concerts free of charge to the community.

"The band has 19 energetic talented musicians that practice every Monday evening in the Cloquet Presbyterian Church," Dooley said. "The church has wonderful acoustics."

The community band gives people an opportunity to play in a concert band as well as giving the community musical entertainment. The band shares all its information with the Cloquet Community Education website and magazine.

Community concerts are performed in April, during the Memorial Day ceremony, during the summer, and during community parades on the Fourth of July and Labor Day. Other performances are held at Fond du Lac college during the Hot Summer Nights Concert Series and at assisted living and nursing care facilities, according to information supplied by Dooley.

"Lynne Putzke and Chantelle Danderand share the role of directing and conducting the band now," Dooley explained. "Any area resident who plays an instrument and wants to play in a band is welcome to join as a volunteer."

Members should exhibit satisfactory playing ability or potential. Students may be accepted at the discretion of the conductor/director and with parental approval.

The band relies on donations from the community to purchase music, equipment, supplies and band shirts.

"We have fun at practices and we enjoy performing," Dooley said. "We are always looking for people who once played or currently play a band instrument and who want to reconnect with playing music. Dust off those band instruments and join the Cloquet Community Band."

To learn more about joining the band, stop in on Monday evenings during practice 7-8:30 p.m. at the Cloquet Presbyterian Church at 47 Fourth Street, or text or call Dooley at 218-206-4441.

The Cloquet Community Band lives on, but without two of its longest-serving members.

Gene and Carol Risdon stepped down after the last Christmas concert. Gene was a charter member of the group.

Carol recalls seeing a newspaper ad when the band was organizing more than 20 years ago.

"I told him, 'This is what you want to do, play in a city band.' He was the first person (other than the organizers) to join."

Carol followed not long after, learning how to play the bass drum for the band, while Gene already knew how to play trombone. Gene was in his 60s then, Carol in her 50s. Now she's 78 and Gene is 87 years old. 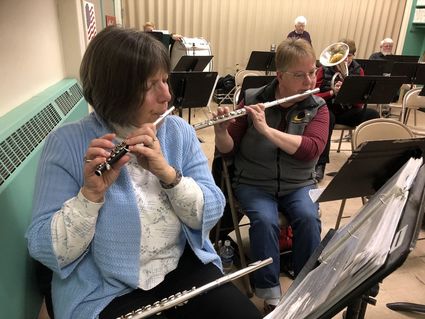 Eventually, Carol took over the job of directing the band. They held rehearsals in the garage of their West End Cloquet building (where they live, and which also houses their current business, The Rock Place). But things got pretty challenging last year when Gene was dealing with health issues and Carol fell and broke both her wrists. That makes directing or beating on a bass drum more difficult. So Carol said she decided it was time to hang up her director's baton.

She misses it, but said she feels the band is in good hands with its new directors.

"I'd tell anyone who was thinking about it to join," Carol said. "It's fun. Good entertainment, good company, good people."