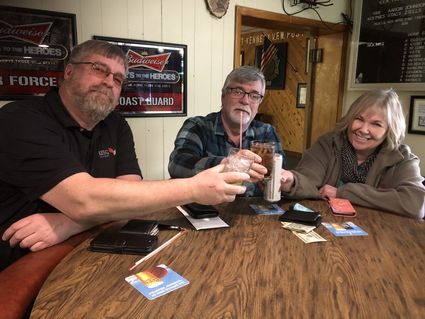 Brad, Steve and Deb Beck headed to the VFW Tuesday afternoon in solidarity and to enjoy a drink together before all bars shut down from 5 p.m. March 17 through at least March 27. They expressed support for the measure to slow the spread of COVID-19, but they were also very much enjoying their time with friends late Tuesday afternoon.

On Monday morning, Gordy's Hi-Hat owner Dan Lundquist said the restaurant would open as planned on Thursday "unless issues develop outside our control."

A few hours later, Minnesota Gov. Tim Walz announced a new executive order: All bars, restaurants, coffee shops, breweries and other public gathering venues were to close to dine-in guests as of 5 p.m. Tuesday through at least March 27.

So Lundquist suddenly had to pivot to new plans for his family-owned restaurant and coffee shop next door. The opening of the seasonal Gordy's is a rite of spring in Cloquet. Having it remain closed (for now) is just another change in a world virtually shut down by the threat of COVID-19 spread.

"We are working on our Warming House plan tonight, but will be postponing our Hi-Hat opening," Lundquist said.

The governor's order allows businesses to continue delivery services and takeout, as well as serving through drive-up windows.

Of course, that isn't an option for bars who rely on liquor and tap sales. Adam Bailey, owner of The Jack in Cloquet, said he's a "little uneasy" about how the forced closing will affect him and other bar owners in the region, who saw brisk business over the weekend despite officials encouraging social distancing.

"The bar owners around here are smart and gifted people," Bailey said. "If this lasts just a couple of weeks, we'll be OK."

Beyond that is the great unknown, he said. "If it's a few months, things will get hairy."

Many of The Jack's employees use work at the bar as a supplemental income, Bailey said. He was working this week on figuring out how to get unemployment compensation for his one full-time bartender, and was waiting to hear what businesses can expect for overall relief.

He said one nongovernmental option was a fund being divvied for workers through the Minnesota Licensed Beverage Association.

Bearaboo Coffee Escape announced on Facebook that it would be a drive-through and grab-and-go only as of Tuesday. It was a common refrain throughout the county.

"This is very sad for us but we know how important it is to stop the spread of COVID-19," Bearaboo owners Natalie and Chris Swanson wrote, encouraging people to call in orders for pickup as well, and posting a photo of the Bearaboo menu.

At Common Ground, Carla Hartmark was preparing for the shutdown Tuesday afternoon. Starting Wednesday, the coffee bar and deli planned to stop customers in the foyer, where they could wait while their carryout order was prepared.

"As long as they'll let us, we will be open," said manager Lee Harris. "People can call in orders or stop curbside and we'll come and get their order." He said upcoming concerts or other gatherings have been postponed for now. 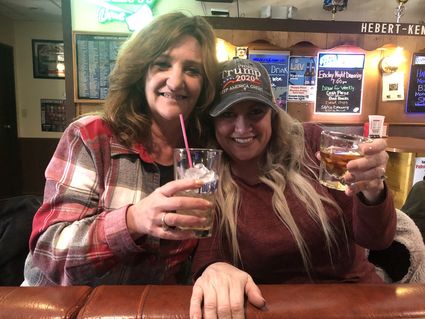 The governor talked again and again about "bending" or "flattening" the curve of COVID-19 cases to keep the spread of the disease slow and manageable for health care providers, so hospitals and others wouldn't be overwhelmed.

As the 5 p.m. Tuesday deadline for closures approached, the bar at the Cloquet VFW was hopping, with an hour left to drink together before the state-mandated shutdown. Patrons were cheerful, and supportive of the state's actions to prevent the spread of COVID-19.

"If it helps stop it (the coronavirus), that's fine," said Brad Beck.

They came for some last moments of camaraderie between friends and family.

"We totally understand why this needs to happen, so this is our last get-together for a little while," said Melanie Maniekee.