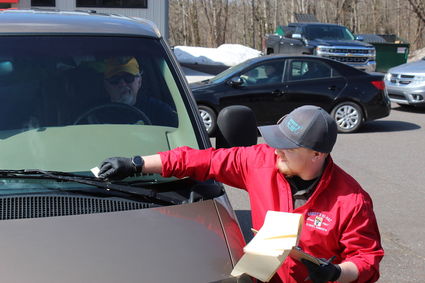 Gordy's server Brett Port tucks a receipt tag under a wiper after taking an order from Dan and Lil Holm of Hermantown. The couple said they always try to get to Gordy's Hi-Hat for its opening day and come regularly in the summer.

In a change from what was originally planned, no customers were allowed inside the restaurant to order. Instead staff took orders from people parked in 21 numbered parking spots around the building, placed those orders inside and ultimately delivered the food and drinks back to the car.

While there was no formal line for cars, that happened at lunch anyway, as cars snaked their way around the north side of the parking lot, waiting for a spot to open up on a busy opening day. Later in the day, the line got significantly longer, with cars waiting both ways on Highway 33 to get to the popular Northland diner.

Things unfolded more slowly at lunchtime. Gordy's staff member Brett Port walked from car to car taking orders on the west side of the restaurant. The 10-year employee said they were still adjusting to the new style of service. Customers have been great, he said.

"I think everybody's excited for a change, and it feels like just a little taste of spring coming in," he said.

Some people also called in orders, which could be a little more challenging for staff.

Sever Lundquist, the third generation of the Lundquist family to be involved with running the popular seasonal restaurant, came out the back door announcing an order for Vanna Kelley repeatedly.

The vibe was peaceful, and people didn't seem to mind waiting in line (in their cars) for a chance to order their favorite item.

For Tara Mofle of Superior, that was the fish.Hermantown's Dan Holm loves the blackberry shakes (large) "plus all the other stuff that goes with it." For Cloquet's Tom Mattson, it's really the onion rings.

Pausing in the midst of the noontime rush, Sever said things were going well; they were "working out the kinks."

"It's getting smoother by the minute," he said. "The service isn't as speedy as it usually is at the counter, but we're doing our best. We even brought in a couple people to help run things out."

No one waited longer to order Wednesday than Lance Lindquist, who showed up at 8 a.m. and snagged the No. 1 parking spot. He was planning to order a double cheeseburger and fries.

He liked the idea of recreating a modern car-hop style of serving.

Hi-Hat owner Dan Lundquist pointed out that the Hi-Hat isn't doing anything new really, stressing that much of their business has always been carryout. It's just "carry out to a car" now. "We're just doing it in a much safer manner," he added.

Lundquist said plans for the car hop service are for touch-free service. Credit cards can be swiped without touching them directly, and staff are all wearing gloves to deliver orders and take payment. They have policies for every kind of payment, he said, noting that the CDC has yet to find a case of COVID-19 transmission via cash, so they'll take that too.

At dinner time on Wednesday evening, cars lined up 20-deep from the north and south on Minnesota Highway 33 and the Gordy's Hi-Hat entance in Cloquet.

"We're just like a (fast food restaurant) and a step above a lot of restaurants that don't have an existing drive-thru," Lundquist said. "We were fortunate in a way, because we've been closed for three weeks to plan for this. We've gotten a lot of information and we're very well-prepared. But we also know things can change daily, and we're ready for that too."

For many of the customers Wednesday, the opening of their favorite burger joint was a bright spot in a strange time.

Matt Rasmussen and Jeremy Dickson were there in full "Ghostbusters" uniforms and car. The duo said they have a tradition of eating at Gordy's Hi-Hat on the first and last day of each season.

"That's how we know our Ghostbuster season is off and running," Rasmussen said.

Founder Gordy Lundquist was at Wednesday's opening in cardboard only. He and his wife, Marilyn, are safe and staying down south for a while until COVID-19 risks subside, said their son, Dan Lindquist.