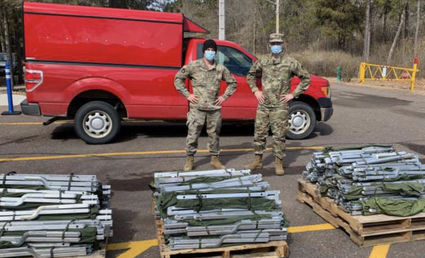 The Minnesota National Guard's 34th Red Bull Infantry Division delivered cots last week for the incarcerated men at the Minnesota Correctional Facility in Willow River. The Department of Corrections said the cots allow the facility to expand its capacity to social distance, quarantine, and reduce the spread of COVID-19.

After the first positive case of COVID-19 was confirmed at the Moose Lake prison on March 30, inmates at the Willow River correctional facility, just 8 miles down the road, started getting nervous.

By then, no visitors had been allowed into either facility for more than two weeks. But the Moose Lake and Willow River programs share a warden and some staff. And until last week, nobody on either campus was required to wear masks.

Prisons, jails and other correctional facilities, where inmates live in close quarters, aren't set up for the kind of social distancing that public health officials say is key to slowing the spread of the highly infectious coronavirus.

That conundrum is compounded at Willow River, home to the Minnesota Department of Corrections' Challenge Incarceration Program - a minimum-security, military-style boot camp for men who are serving sentences on nonviolent convictions. Up to 180 people live in extremely close proximity in the program's barracks: As many as 60 men are assigned to a unit, sleeping in bunk beds only a few feet apart.

Family members describe a situation that contradicts the disease-prevention practices of social distancing and wearing face masks that state and federal officials have been urging. They have raised their concerns with corrections officials in letters, phone calls and a call-in conversation with families of people incarcerated across the state that corrections commissioner Paul Schnell hosted last week.

And they worry that if the virus takes hold inside the facility - where residents share just a few toilets with dozens of other men and take hurried showers standing shoulder to shoulder - it could spread like wildfire.

"It's not if I get it; it's when I get it," one participant has been telling his mother for the past month. She asked that MPR News not use her name or her son's name, because she fears retribution against him if she speaks publicly.

"He's said things like, 'It's really hard to be in here, knowing that my life is theoretically in someone else's hands,'" she said of her son, who she said has struggled with chemical dependency and related legal issues since he was a teenager. "And they don't seem to care."

During a brief phone call Sunday, the woman's son told her that now he's showing symptoms of COVID-19. He said he doesn't have a fever, but told her he occasionally has difficulty breathing, is congested and feels weak.

As of April 17, three participants had tested positive for COVID-19 at the Willow River CIP. Six other program participants were presumed to have positive cases, because they were showing symptoms of the disease and had been exposed to men who tested positive. Corrections officials say all nine men who are sick are members of a single unit - the same unit the woman's son is assigned to.

The growing numbers have led some program participants and their families to fear there are more cases that have yet to be confirmed. But according to corrections department data, only three participants in the Willow River program have been tested for COVID-19.

Corrections commissioner Schnell said he's very concerned about what appears to be an outbreak of the coronavirus at the department's nearby Moose Lake campus, where more than two dozen staff members at the medium-security prison were either confirmed - or presumed - to have contracted the virus. One staff member at the Willow River CIP program is also presumed to have been infected.

Schnell said his agency has been working closely with the Minnesota Department of Health about how best to manage the situation. He said the barracks-style living at Willow River poses unique challenges.

"Those are always areas of great concern," Schnell acknowledged. "They weren't built for social distancing and the other practices that ultimately can mitigate risk."

Schnell said the warden of the Willow River facility has focused on quarantining men who have tested positive for COVID-19, as well as those who are presumed to have it.

Last week the Minnesota National Guard delivered cots to Willow River "to help alleviate some pressures as [staff] move people around in order to manage the situation," Schnell said.

Additionally, he said, corrections staff have separated the program's three 60-men units from each other for the chemical dependency treatment and educational aspects of the program, in an effort to allow for greater social distancing. Schnell said they hope it will prevent the virus from spreading among the three units.

While corrections officials don't know exactly how the virus spread to the Willow River program, Schnell conceded that it's more than likely it was brought in by staff members. The program hasn't been allowing outside visitors since March 12. But medical and other staff work at both the Moose Lake and the Willow River campuses, moving frequently between the two.

Schnell said corrections staff have worked to minimize that back-and-forth since the outbreak at the Moose Lake prison began. But, he said, "we have to continue to operate, to make sure that medical care is provided. And much of our medical staff is based out of, and travels between, Moose Lake and Willow River. So there is going to be some of that type of cross-over."

The spread of COVID-19 has proven especially difficult to contain in places where residents live in close contact with one another. Since the pandemic began in Minnesota, state health officials have focused many of their efforts on congregate care settings like assisted living centers and nursing homes, where residents' underlying health conditions can make them especially vulnerable to the disease. Those same challenges exist in correctional facilities.

"The closer people are, and the more they share common spaces ... the more likely the virus can spread from one individual to the next," said Lynne Ogawa, medical director for St. Paul-Ramsey County Public Health, which delivers health care at the county jail and other correctional sites.

While scientists are still learning about COVID-19, they know that the disease is transmitted through respiratory droplets, and can spread undetected from people who are infected, but not yet showing symptoms.

That's why state and federal health officials have stressed the importance of wearing cloth masks when out in public as a way to protect others, and of reserving specially engineered masks like N95s - which protect the wearer from others who may be infected - for health workers and others on the front lines of care.

Earlier this month, inmates who work in the Moose Lake prison's textile and garment plant began making thousands of cloth masks for the people who live and work in correctional facilities around the state. Residents of the Willow River CIP program received theirs about two weeks ago.

But family members say the masks were not consistently worn by program staff until the Department of Corrections required them last week. A department spokesperson also confirmed that the agency had obtained N95 masks for staff at the Moose Lake and Willow River campuses.

Family members say the availability of masks - and the mandate that staffers wear them - has offered them some comfort. Still, they worry the improved protective measures may be too little, too late.

Last week, the American Civil Liberties Union of Minnesota sued the Minnesota Department of Corrections, demanding the early release of some inmates at the nearby Moose Lake prison, and asking the state to appoint someone outside the agency to help increase testing and social distancing efforts there.

The complaint alleges the department is not making it possible for inmates to practice social distancing to slow the spread of the coronavirus, and that the Moose Lake prison has "failed to take even rudimentary measures to prevent and stop the spread of COVID-19." (See story, Page 5)

The suit does not include the Minnesota Sex Offender Program facility on the Moose Lake campus or the Willow River CIP facility nearby. But family members of participants in the Willow River program say they face many of the same issues that the ACLU suit outlines, and argue that CIP participants are ideal candidates for early release in the face of a growing pandemic.

The Willow River CIP program is open to men who were convicted on nonviolent drug or alcohol-related charges. Participants apply for the program toward the end of their sentence, and are selected in part because they don't have extensive criminal records or disciplinary histories while in prison, and are good candidates for rehabilitation.

The first phase of the program at Willow River is the six-month boot camp, which includes military drills and manual labor, in addition to chemical dependency treatment.

Successful participants are released to their homes, where over the next year they are supervised closely and expected to maintain full-time jobs and perform community service.

Schnell said the Department of Corrections is considering the implications of some form of early release for members of the program.

"We anticipate [taking] action," he said, for people nearing the end of the program's first phase at Willow River. He said corrections officials need to set up a system to ensure that participants complete the program - and that anyone released doesn't expose family members to the virus when they return home.

It's a new role for the department.

"The DOC has long been focused on the business of public safety and rehabilitation," Schnell added. "Today we find ourselves adding that third focus of public health. And there is no doubt it creates a significant challenge to a correctional environment where we're having to learn a whole new strategy."

Family members say they know the Department of Corrections has a difficult task. Still, they say the concerns their loved ones have raised, and the questions they have brought to department leaders, have not been adequately addressed.

And they hear in brief phone calls that their loved ones at Willow River are increasingly frightened as more and more people get sick around them. The mother of the man enrolled in the Willow River program, who's struggled with substance abuse issues since his teen years, said he tells her how powerless he feels to do anything about it.

"These are people who are someone's father, brother, son, nephew, uncle - whose lives potentially could be being put at risk," she said. "And it's preventable. I just can't look away from that."