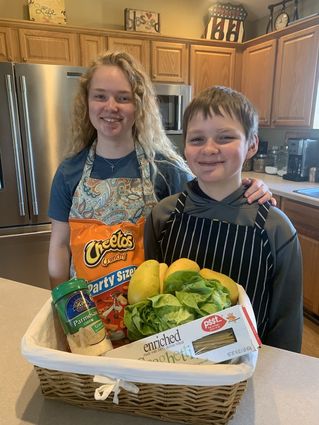 Allison Sickmann, 16, and her younger brother Parker, 12, recently used a random batch of ingredients (including mangos, lettuce, and spaghetti noodles) to make a meal.

A writing assignment was shared with the Pine Knot News by English teacher Jason Richardson. Cloquet High School student Allison Sickmann used a prompting quote about not thinking of what you don't have but instead of what you do have to work with.

It's from Ernest Hemingway's "The Old Man and the Sea." She turned in the following abstract about her dad demonstrating this philosophy during the governor's stay-at-home order. "It's good writing. Timely," said Richardson.

The planet is cold, vacant, and gray. Households across the world are cooped up in living rooms wishing things could go back to normal. My dad is also in the living room, perched on the couch, but he doesn't mind. He knows we can't leave our house but he has decided to embrace this time with family and adapt. His outlook is expressed by Hemingway's Santiago: "Now is no time to think of what you do not have. Think of what you can do with what there is."

The kitchen cupboards hold miscellaneous ingredients with a thin layer of dust. Normally they wouldn't be mixed together, but this isn't a typical night. The pensive man on the couch knows that we can still cook something. We just need one extra ingredient: creativity. My dad gathers the family in the kitchen and announces that we were going to play "Chopped." The rules are simple: We have two hours to make an appetizer, entrée, and dessert using all the ingredients in some way. With our aprons on and my brother by my side, we wouldn't stop until we made the most delicious dinner and had a lot of family fun.