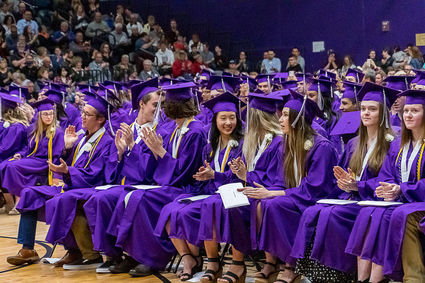 It will be a Cloquet High School graduation unlike any that have come before, that's for certain.

Restricted by orders prohibiting large gatherings and aiming to promote social distancing during the COVID-19 pandemic, the Cloquet school district is renting a 40-foot-wide drive-in movie screen and inviting each graduate and his or her family to come to the Cloquet Business Park on North Highway 33 to watch a graduation ceremony on the big screen.

The big event is scheduled for 9 p.m. Friday, May 22. It's a little later than originally planned time due to the need for darkness, but still on the same day.

"We will record every student walking across the high school stage, each student getting a diploma, speeches, everything all prerecorded, then we can all watch it together," CHS principal Steve Battaglia said Wednesday.

"The big thing the students wanted was some togetherness," he said. "Of course, there's a whole new definition of togetherness in the world now ... like being able to smile at a person in the next car and have a shared experience. They were the drivers on this so we thought outside the box, and here we are."

Audio Visual Resources (AVR) will be recording the students and making the graduation movie, which will also include a senior slideshow and more. Each graduating senior should have signed up for a time slot next Tuesday or Wednesday for their walk across the stage; they will also get some time to pose with family members if they want (that's a bonus). Then AVR will put it all together into a movie that will both screen at the business park and simultaneously premiere online May 22 on a yet-to-be-determined YouTube channel.

The screen will be three times the size of the outdoor screen used for the movie in the park on the Fourth of July in Cloquet.

AVR owner Brita Edgerton said they are excited to work with the school districts (they're doing something similar in Silver Bay and probably Virginia).

"It's fun talking to different districts, because everyone is having to create and readapt," she said. "Necessity really is the mother of invention, like they say."

She said it's wonderful to be relevant and to use their skills in ways different from showing movies in the park (they also own Twin Ports Outdoor Movies) or providing audio-visual support for conferences, etc.

"It's almost like baking at home," she said. "You have all the ingredients, and you make the same dishes everyday. Then suddenly you take the same ingredients one day and make a completely different dish."

The drive-in event is invitation only. Each student will receive a parking pass, and cars will be screened as they enter (and given popcorn). Police will direct the parking to make sure everything is done safely. Battaglia said they will allow only one car per family, except in cases where parents are separated. He's expecting more than 200 cars.

Others can watch the same thing online, at the same time.

"We're trying to combine virtual and some sort of gathering," Battaglia said, adding that it's "absolutely imperative" that people stay in their cars. "It's about as good as we can do, given the circumstances."