Here, it's 'stay at home' or risk beating 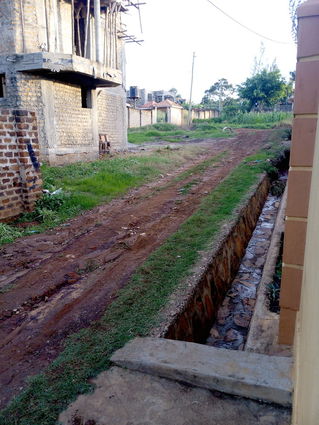 The view outside of Sharon Oyat's home in Uganda includes no people as the country tries to tamp down spread of the COVID-19 virus.

Sharon Oyat is from Uganda and previously worked as a newspaper intern in Cloquet and has many close ties in Carlton County and Minnesota. She writes an occasional column for the Pine Knot News and shared what the worldwide pandemic looks like in her country

We are Africans. We have summer year-round. We eat healthful foods - ash is an ingredient in some of our delicacies. We are herbalists. This "corona thing" affects only the European countries. They are in winter now, it's very cold. Scientists say the virus cannot live in hot climates and Africa is the author of hot climate, so ... Why worry?, I kept telling myself.

I sold myself all sorts of ideas justifying how this virus would not arrive in Uganda.

I woke up with all news of how hundreds of people in Italy had died in a matter of days but I was still in denial. Then we started hearing the disease was spreading in other European countries and America. President Trump gave the world hope that "it's just a flu," until the numbers of infections and deaths in the United States started competing with Italy and China.

These are countries with the best medical facilities, experienced and ethical doctors and nurses, ready and willing to be at the frontline to protect fellow citizens ... countries with wealthy governments able to buy as many ventilators as possible and construct hospitals in a matter of days just to fight the pandemic.

How about my country, with limited drugs, underpaid doctors and few hospitals? If this disease reaches Uganda, I am doomed.

Then news arrived that the virus had arrived in Africa - Egypt - and then it quickly spread all over the continent before I could even come up with more excuses. The fear of the unknown started building up. People started taking the disease seriously. Sanitizers were found at every entrance of any commercial building. Vendors started tying ropes across entrances of their kiosks. We stopped shaking hands. When someone coughed or sneezed near you, he or she was looked at like a murder suspect.

Then Uganda had a confirmed case. The patient was a 38-year-old male from Dubai. All my hopes and dreams were shattered. I can catch the disease, what I am going to do? My mother cannot lose me. What they will tell my nieces when I die? How will they explain to a 4-year-old that her only aunt is no more? I couldn't help but think of all the horrible things that could happen.

I was not the only one in panic. Ugandans took their fear to social media. "I have never even left my home village and the foreign disease kills me," one person wrote.

There was no national response until the government declared a total lockdown with only essential services functioning (food markets, pharmacies and hospitals).

The 14-day lockdown put people into panic. Prices of any essential item spiked, not only for sanitizers, soap, but also foodstuff as people were stocking for the unknown. The state gave parents two days to pick up all children from schools and schools to be closed in less than 24 hours because all roads would be closed. You must stay where the lockdown finds you.

You can imagine the chaos my country was in for 14 days. People were beaten and arrested and others hospitalized.

This went on until people demanded the president intervene. He adhered and commanded that no security agent should beat anyone, but once anyone is found outside their homes, they will be charged with attempted murder, because you will be trying to either catch the disease or spread it.

At this point the state was trying to locate anyone who had just come into the country from the high-risk areas. The more the numbers of infections grew, the more restrictions the state declared. Once movement out of one's home was declared a crime of attempted murder, people became more cooperative. The president was dead serious and many people were arrested and charged with attempted murder.

I told myself, the government is just going to trace these people, test them, treat them, and business will be back as usual. The moment the lockdown was declared, my boss immediately sent out emails saying he did not expect us to work and therefore we will be paid for only the days we had worked in March. I told myself, it's only 14 days. Then the days were extended to another 21 days.

At least after the extension we were allowed to walk to the market and do outside exercise. But still, roads were closed and no means of transport allowed unless you were an essential worker who was picked up and dropped off by your organization. A 7 p.m. curfew was declared: anyone found outside after that was arrested and charged with disobedience of presidential directives, attempted murder, and other crimes.

I was stuck in Kampala, the capital city, unable to reunite with my family. I was going to be alone with no one to talk to for the next 35 days. Of course I usually stay alone, but once you're told you're going to be in your house alone with no contact with the rest of the world, it is disturbing. Your first instinct is "How do I beat the system?"

I was able to behave the first 14 days. After that I got bored and started going for long walks in the suburbs and noticed the crime preventers had relaxed a bit. One evening I walked a longer distance than usual and I couldn't make it home before the curfew. I was terrified as there were more military personnel than when I had headed out.

"Stay calm, look confident, smile when you make eye contact," I told myself.

"You," shouted one of the shabby-faced military men. "Ogenda wa?" meaning "Where are you going?" Once I heard that I couldn't feel my feet as my body wanted to run as fast as I could. Instead I remained where I was, my heart racing and my eyes widening. I felt my heart pump blood as if it was trying to escape. Flashes of what I had seen in the news the previous weeks of people being beaten and arrested came flooding in my mind.

I opened my mouth to speak but my dry throat wouldn't allow me to say a word. I finally calmed myself. "Ngenda waka, bansoyiwe," I said, meaning "Am heading home, am sorry." The military man started taking steps toward me, his arm was raised and in his palm he gripped a slender bamboo-like cane slightly bent at the end. His face was frowning and angry.

I couldn't run. I just stood there, like a trapped sacrificial lamb.

Another man came by, dressed in casual clothes but you could tell he was in the military before by his posture. "Afande!!" he shouted. "What do you think you're doing, do you want to beat a helpless woman who is clearly trying to get home ... are you crazy?" he asked the military man.

At this point I was confused. Who could this bold man be? All kinds of questions rushed through my terrified mind. Who even asks a military person if they are crazy? This man puzzled me.

He walked toward me slowly. At this point I was so terrified that tears started flowing down my cheeks like a busted river. I was crying with no sound and not even realizing my tears. It is the power of fear.

"Am sorry young lady. What is your name?" he asked.

"Sharon," I answered, as I tried to wipe my tears in shame.

"Look, Sharon, I am sorry for my colleague who tried to cane you. Please forgive him, these are young boys who have just started in the military and they think by being aggressive they are impressing us. But next time I catch you walking past curfew I will not only let him beat you but will arrest you as well. And am sure you know the charges."

His face changed from being the brave superhero to villain, but he had saved me from "kiboko" (massive canes).

I have never run as fast in my life like the way I ran that night. I think I reached my place in under five minutes - a distance of about 10 kilometers. That was the last time I left home. Since then, I haven't walked out of my door [despite admonitions from the government lately that soldiers were overreacting.]

We have been given another 14 days, according to the latest presidential address, but we are running out of resources. Ugandans are lamenting a lack of food. Let's wait and see what will happen.

I hope I will make it through the COVID-19 lockdown alive and safe. As we say, COVID-19 may not kill us, but hunger may.

Appreciate what you have now. You may not know what the other is lacking.