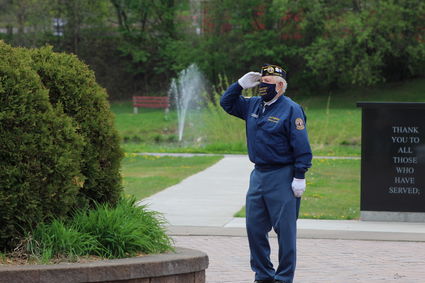 Cloquet Combined Honor Guard Capt. John Prouty salutes while Capt. Rich Chasse raises an American flag on Memorial Day Cloquet's Veterans Park. Protocol calls for the flag to be flown at half-staff from sunrise until noon, then raised to the top of the staff until sunset in honor of the nation's war dead.

You just can't cancel Memorial Day. After initially announcing there would be no ceremonies by the Combined Cloquet Honor Guard because of coronavirus concerns, events to honor the nation's fallen soldiers came together anyway.

At Cloquet's Veterans Park, a prayer was said, wreaths were laid - representing each branch of the military - and Marine Lance Corp. Bryce Moe played taps on his trumpet, as a crowd of nearly two dozen people stood silently Monday morning. At Hillcrest Cemetery, above Pinehurst Park, a handful of people watched Moe in silence, a somber moment.