Artists get a boost in pandemic dearth 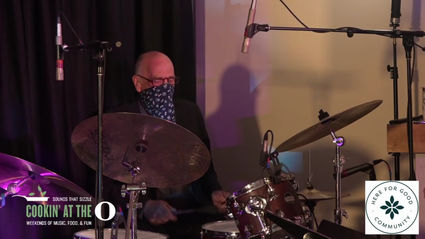 A masked Glenn Swanson plays the drums in this screenshot of an online jazz concert at Oldenburg House.

In this pandemic, artists are among the most financially vulnerable. At the last full Census count, 65 percent of writers, 57 percent of visual artists, 41 percent of musicians and singers, and 36 percent of performing artists reported being self-employed. For decades, economists' research has revealed that artists' incomes are far lower than that of other workers with comparable levels of education.

Arrowhead Regional Arts Council's executive director Drew Digby reports that artists in our region have sustained job and sales losses at dizzying paces over the past few months. Even before March 1 and the stay-at-home order, theaters and music venues canceled performances, often without paying cancellation fees. Art museums and galleries shuttered.

By March 15, almost every artist that ARAC staff talked to reported a substantial implosion in income, including losses from moonlighting as restaurant or retail workers. Self-employed artists had to wait for clarification on unemployment compensation. "The panic was incredible," Digby said. "Many feared that they would not be able to pay rent due on April 1."

ARAC pitched in to help, reinventing itself by creating four emergency grant programs. They contributed to St. Paul-based nonprofit Springboard for the Arts, which in turn offered artists emergency arts grants of $500. ARAC cut back on other activities such as training and converted all ARAC small grants money into emergency grants of $750.

"We received 25 applications from Arrowhead area artists who had been laid off or whose markets had been shuttered," Digby said.

It deferred the Established Regional Artist grant awards, transferring the funds to their Emergency Working Artists Grants of $2,000 each. ARAC then took every penny left at the end of the fiscal year to fund 13 more. They again contributed to Springboard to quickly fund 12 area artist projects.

Venues have been similarly hard-hit. To help cushion the blow, ARAC continues to disburse existing organizational grants. Digby contacted 50 regional organizations to find out what they needed in terms of operating support.

"More artists and organizations than I expected, especially small ones, wanted us to keep money in project grants because that was a way to keep funding artists," Digby said. "I was pleased that so many groups wanted to make sure that money was still flowing to their artists."

Digby and his board responded with an Organizational Stability Grant up to $2,000. The board funded 11 venues.

Minnesota's Department of Employment and Economics Development program moved faster than any other state to provide and speed up aid to workers across the board, including artists, Digby said. Minnesota's responses have been creative, using a mechanism in disaster law that permits payments to people who aren't qualified for normal FEMA relief.

Artists were encouraged to apply for unemployment from the beginning but it was a confusing process.

"Minnesota managed to enroll many artists faster than in other states," Digby said. "The downside was that they didn't stop to make it pretty."

ARAC is one of 11 regional arts councils in Minnesota, funded by appropriations from the Minnesota state legislature with money from the state general fund and Arts and Cultural Heritage Fund. It also applies for and receives foundation funding. During this stretch of COVID-19 closures, ARAC conferred with the other regional arts councils. Digby serves as president of the group.

Artists are creatively responding to COVID-19 pandemic challenges. A tiny percentage of artists are masters at online sales. Some are taking performances and classes online, for free or for a fee. There was a jazz singing class by Sarah Greer, a frequent performer at Oldenburg House. Mothy Groves and pals created an online music video.

Many parents, reports Digby, are begging teaching artists to give their kids lessons remotely. ARAC and partners are doing online marketing for artists.

Digby recalls an adrenaline rush the first six weeks. "But there's a lot of sadness in this. Many artists are fearing eviction, using rent money to buy food. There is still much to be done. I don't think a $1,200 or $2,000 grant will alleviate all the pain that artists are going through," he said.