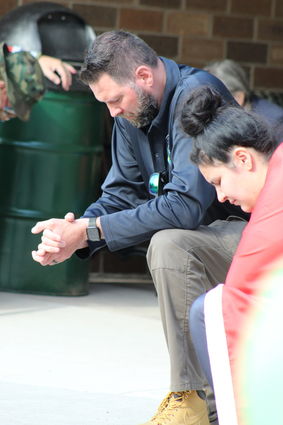 Geese honked in unison overhead. Then, after they passed over, the few of the formation's stragglers gave fading squawks individually. Birds chirped from newly flowered fauna. There were the whirs and clicks from media photographers and rumblings of traffic on an overcast and, when the breeze kicked up, chilly late Saturday afternoon.

The small clock tower at Cloquet City Hall showed 6 p.m. Now there was the shuffling of feet, some of the more than 60 bodies here repositioning on the asphalt parking lot long into a silent kneel-down of 8 minutes and 46 seconds. That was the length of time a police officer had a knee on George Floyd's neck as he died on a Minneapolis street 12 days earlier.

If you had zoomed up by satellite just then, and zoomed back down to cities large and small across the country, people in massive and small groups were gathered in protest to police brutality - specifically, the targeting of African Americans. Immediately following Floyd's death, days of peaceful protest met with physical destruction in Minneapolis and spread.

Eventually, the heat dissipated, and peaceful gatherings have kept on in the large cities and in places like Cloquet.

The anarchist and the officer

Near the entrance to City Hall, a self-proclaimed indigenous anarchist knelt next to a newly minted police chief. Their faces were deep in thought, eyes closed, each with hands clasped in front of them.

Derek Randall had seen the social media chatter around the vigil planned at Veterans Park on June 6. He decided to knock on Taysha Martineau's door. The day before, he had shed the interim tag as Cloquet's police chief, the city council officially choosing him to lead the department.

"I wasn't sure what kind of response I was going to get," he said of the visit to Martineau. Nobody was home on Wednesday, so he tried again on Thursday.

"I was mortified," Martineau admitted in a post on the Gitchigumi Scouts Facebook page. She retold the story Saturday at Veterans Park.

The Scouts is a small group based on the Fond du Lac reservation advocating for missing and murdered indigenous women. Martineau felt it was necessary in a time of deep crisis to support black Americans and the treatment they receive from law enforcement.

"We want to gather in the community as a collective in prayer for the pain all our brothers and sisters of color are feeling all across America," Martineau pleaded before the vigil. "We want to call for transformative change and we ask that every resident of Cloquet join us because in this world today your prayers are needed."

Because it's an issue involving the police, she had no interest in having them at Veterans Park on Saturday.

Then came the police chief.

"I could feel the anger and the sadness," Randall said of the mood around the rally earlier in the week. He felt it too, he told those gathered at City Hall after a police-escorted march from the park. Sharing that with others was what he wanted. "That's why I was at her house. It's important to have those uncomfortable conversations."

Martineau gave hesitant reprieve. "We do not have the right to tell anyone that they cannot attend a public event, let alone deny anyone the right to pray," she wrote on the Facebook page announcing that officers would be part of the event.

"This is bigger than me," she told those at the vigil Saturday. She put her personal feelings aside.

Randall moseyed into the growing group of people at the park just after 4 p.m. If one hadn't known about the vigil, the gathering could have easily been mistaken for a quiet family reunion or social picnic. The stiff wind from the east brought the familiar smell of pulp from the paper plant. Light traffic traversed the nearby bridge over the St. Louis River. The lanyards holding American and military branch flags clanged against the metal standards. A dog woofed. Children scurried about. Some rubberneckers who wouldn't go into the park gathered on the north shoulder of Avenue B.

Carlton County Sheriff Kelly Lake was there, along with other county and city officials. But mostly it was regular young and old people seeking a voice among many - some black, some brown, most white.

The crowd swelled to more than 100 people and at 4:21 Martineau and others joined the Cedar Creek Singers at the center flagpole in the circular veterans memorial. The group drummed and chanted.

This is a vigil, Martineau proclaimed. And no one was here to hijack a movement. It was a chance to show solidarity.

Despite her radical activist's heart, Martineau spoke in measured, soft tones tinged with a visceral empathy. "I don't know what it's like to be black in America," she said. "But I pray for you."

Speakers followed her. A native healer saying "enough is enough." A law student saying "We're not asking for justice. We are demanding it."

Lyz Jaakola said she has been wary of leaving her home in Cloquet during the COVID-19 pandemic. But coming Saturday was necessary in order to "connect" with others. "We are made to connect," she said. "America has a very difficult history" that we all need to process. "In our differences there is strength."

Martineau returned, and asked the Cedar Creek Singers to begin again. "Will you dance with me?" After a Minnesota Nice delay, people broke from the socially distant semicircle and danced around the men.

It was a bit of a twist to the planning that Randall, along with a police car, would lead a march to City Hall. A little more than half of those who gathered at the park walked the dozen blocks to what is also the home of the Cloquet police department. There were chants along the way. "Black lives matter." "George Floyd matters." "I can't breathe."

There was little in the form of disparagement toward police. Perhaps it was an olive branch to Randall.

Bottles of water sat in a cooler near the doors to City Hall. The singers rose again.

Then Randall addressed the group.

"I wasn't sure what kind of response I was going to get," he said of approaching Martineau about joining the vigil. He said anyone who knows him would say he's a "softie," no intimidation intended.

He pledged that his department would follow three principles: enforce the laws, protect citizens and prevent crime.

What he saw in Minneapolis chilled him. "We say enough is enough." 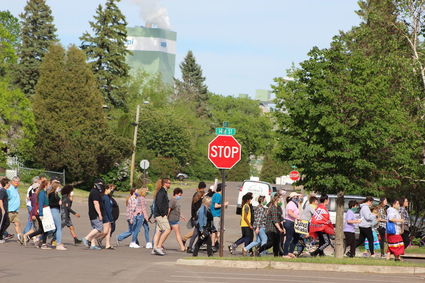 A group attending a vigil in response to the death of Geroge Floyd in Minneapolis last month, and the worldwide protest it has wrought, marched to city hall from Veterans park in Cloquet Saturday under police escort.

He said his police officers will strive to know the people in the community they serve. "It's hard to be disrespectful when you know them."

"Imagine," he said, if departments across the country applied the principles he is espousing. "It starts in Cloquet."

He said he will look to lead efforts for better policing on a state and national level.

Martineau spoke after, saying we all need to "look inside ourselves" for solutions. "I think today was beautiful. But I still can't breathe."

"We need to abolish hatred," she said. "We need to know we are safe in our community."

She invited everyone to take a knee and observe silence for those 8 minutes and 46 seconds.

Afterward, Martineau said "I think today was beautiful" and told people to disperse peacefully, go home, and reflect - and take care of themselves after gathering with others during a continuing deadly pandemic.

That brought rise to the final chant of the event.