It's berry time in Carlton County 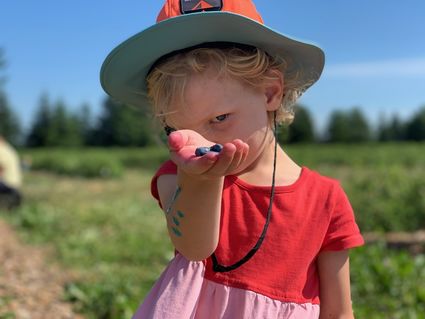 The weather is heating up and so is berry season. Despite struggles with keeping plants watered during what has been a dry spring and early summer in Carlton County, strawberries are ripe at Spectrum Farm as well as honeyberries at Farm LoLa, both southeast of the Interstate 35 corridor from Cloquet.

There is a convenient website to keep up with picking seasons at seven county berry farms, CarltonCountyFruit.org. Expect raspberries later in July and then blueberries. The site has links to each farm website and social media pages along with hotline numbers to call for picking information. Because of COVID-19 pandemic precautions, pickers are encouraged to call ahead or get information from social media on protocols for picking. Some farms are taking pickers by appointment only.

Farm LoLa opened late last week for its second season of the unique honeyberries, which look like oblong blueberries but have a tart flavor all their own. LoLa owner Jason Amundsen said there are seven varieties at the farm. He makes sure pickers taste-test berries to know what they like.

Picking got rained out on Monday, something Amundsen said he doesn't mind at all considering the drought conditions. "It's been brutal," he said of finding ways to keep plants watered. "We have taxed our ability to water."

Like other sustainable farms in the county, LoLa uses a combination of captured rainwater and groundwater irrigation along with hand-watering. Without rain, the systems get stretched.

LoLa will also have raspberries and blueberries. The farm south of Wrenshall was first known as a home for chickens and the Locally Laid eggs they produce. It has since branched out into crops.

With people still learning about the honeyberry, which is more commonly found in Canada and Russia, Amundsen said he appreciates pickers posting how they use the berry, whether it be for milkshakes or on pancakes, he said. There has also been an interest from area breweries for specialty beers made from the berries, Amundsen said.

Spectrum Farm Strawberries, located between I-35 and Hay Lake, opened to strawberry pickers on Monday. Owner Steve Schulstrom said the turnout was "fabulous" with "tons of pickers" happy to be outside and doing something as social distancing continues. He said there is natural distancing at the farm as pickers go through every other row.

There are plenty of berries, Schulstrom said, but because of expected and continued heat, the season could go fast. It's already started earlier than usual. The farm expects to be open this weekend.

Uff-Da Organics in Wrenshall is open for strawberry picking by appointment only. The farm sells greens to restaurants and stores and has garlic available for pickup.

The early starts for LoLa, Uff-Da and Spectrum has other raspberry and blueberry farms expecting to have pickable fruit in a few weeks, likely mid-July, for raspberries and the end of the month for blueberries.

The blueberries and raspberries are shaping up at Leaning Barn Farm in Esko, owner Ann Gustafson said. She and Chris Gustafson, along with previous farm operators Ken and Ruth Jorgenson, have had to use irrigation for the first time this season. The Gustafsons are in the seventh year of bringing berries to maturity, having been open to the public the past four years. The Jorgensons sell greens and vegetables at area farmers markets.

Lori and Tim Eaton at Blackbirds & Blueberries in Cloquet have pick-your-own and picked blueberries. They expect to have ripe fruit by the end of the month.

Brenda Knudsen was reveling in the rain Tuesday morning at Chub Lake Blueberries. She's expecting a good month of blueberry picking starting at the end of the month. She is taking pickers by appointment only.

It's a historic season at Sweet Land Farm, north of Cloquet. Veronica and Nathan Langer will be taking blueberry pickers for the first time by the end of the month. They are taking appointments and, like many of the farms, are constantly updating farm progress on social media sites like Facebook.

Things have been dry but the bushes are growing well, Nathan Langer said. This is the sixth summer the couple has been on the farm in preparation for the inaugural season. 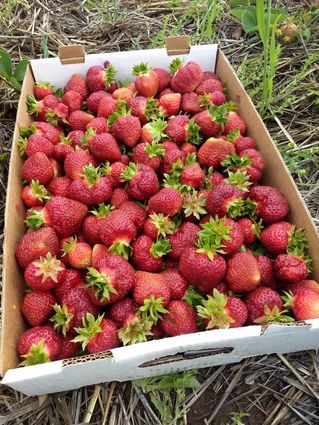 The strawberries were big and flavorful Monday at Spectrum Farm when its picking season began. Raspberries and blueberries are still to come.