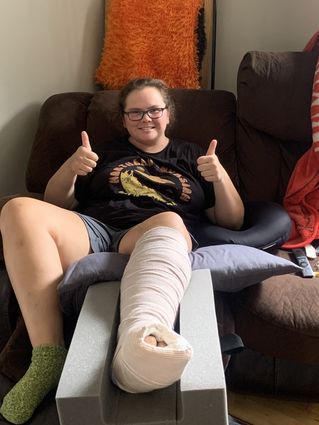 Cloquet's Morgan Warbalow is feeling fine after a mountain biking accident Sunday at Cloquet's Pine Valley Park. Part of a tree penetrated her leg after she fell from her bike. There was no permanent damage, she said.

A bicycle accident at Pine Valley Park around 10:30 a.m. Sunday morning left a 25-year-old Cloquet woman with her leg impaled on a branch stub of a decaying tree. While it sounds horrific, she is OK and left a hospital in good shape Monday.

"Nothing was broken and there's no nerve damage," said Morgan Warbalow Wednesday. "I got pretty lucky."

Warbalow said she was biking on a narrow part of the mountain bike trail with a client from the foster group home where she works when the accident occurred. She doesn't really know exactly how it happened, but she ended up on top of a dead tree that was about 8 feet long. A spike formed from a branch penetrated her leg from her calf upward to the back of her knee, just below the skin. Emergency responders had to cut the trunk so she could fit on a stretcher, leaving Warbalow with about a 3-foot section of the moss-covered wood that held the spike. While it went in deep, it did not exit her leg.

According to Cloquet Area Fire District battalion chief Chad Vermeersch, it took paramedics and firefighters 10 minutes to reach the injured biker on one of the upper trails at the park and nearly an hour to get her to the parking lot.

Warbalow's biking partner made the 911 call.

"He did a great job," Warbalow said. "He met the paramedics in the parking lot and showed them where I was. He did really well."

Vermeersch said CAFD paramedics planned to fly her to a Duluth hospital but once they got Warbalow to the parking lot, they could not fit her into the waiting LifeLink helicopter "because of patient packaging." She was transported by ambulance to Essentia Health-St. Mary's Medical Center in Duluth. Warbalow said she remained conscious throughout until they put her under at the hospital prior to surgery Sunday.

Warbalow came home Monday. She's better, but couldn't put any weight on her leg as of midday Wednesday. She said she was "a little sore."

She figured it was the second time for her on a mountain bike trail. She admitted that she wasn't wearing a helmet. "Yeah, I got super lucky," she said.

Will she mountain bike again?