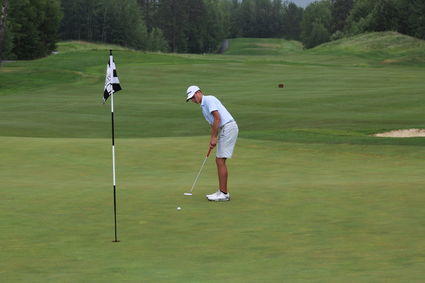 Sam Baker's win was fueled by a blistering seven-under final round Tuesday.

Even without a high school golf season, Cloquet's Sam Baker has stayed sharp and this week won the 2020 Minnesota Junior PGA Boys Championship at The Quarry at Giants Ridge in Biwabik.

"It was a big relief to win that and to have an exemption into the [Minnesota] State Open, it was huge for me," Baker said.

Baker shot a stunning 65 on Tuesday's final 18 holes, seven under par, to win by five strokes over second-place finisher Carson Herron. Baker was one-under for the tournament.

The Cloquet High School senior finished Tuesday with five birdies, one eagle, and no bogeys. Baker started off the championship Monday shooting a 78, six over par. He sat in 21st place after Monday, seven shots behind the leader.

CEC boys golf coach Aaron Young called Tuesday's performance "almost a dream round" and said it showed Baker is continuing to mature as a golfer.

"To see him come back from day one and shoot what was an extraordinary round - he hit almost every green in regulation - so he was on," Young said. "[With a 65], you're getting somewhere people don't get very often."

The COVID-19 pandemic has halted numerous sports, but golf, with its outdoors space and solo play, has successfully made a return at most levels.

Baker said he's been training for golf every day since "a few weeks after the snow was off the ground," and that he's had "lots of other tournaments."

The national Junior PGA Championship scheduled for Florida next week was canceled in May due to the pandemic, meaning Baker won't get a shot on a national stage. 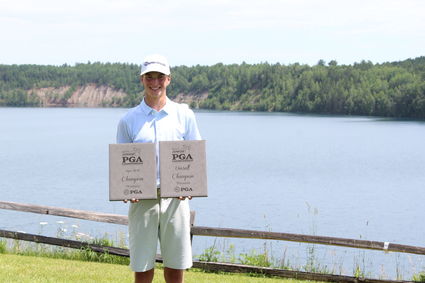 Sam Baker displays his championship hardware on the course Tuesday.

The win gave him automatic entrance to the Minnesota State Open at the Royal Club Golf Course in Lake Elmo starting July 7, which Young said is more of an adult tournament.

"He'll get to step up and play with some of the best players in the state," Young said.

The new golf coach is looking forward to the 2021 boys high school golf season next spring with a team that took third place at the state tournament in 2019.

"Last year they won (sections) by over 40 strokes to get to state and it probably would have been even more this spring," he said. "I'm just hoping we get a chance to play next year."

He said winning the state junior PGA tournament will also improve Baker's chances to play golf at a top college after graduation next year.

"It's great to see some of these kids who have grown up here take off," Young said.