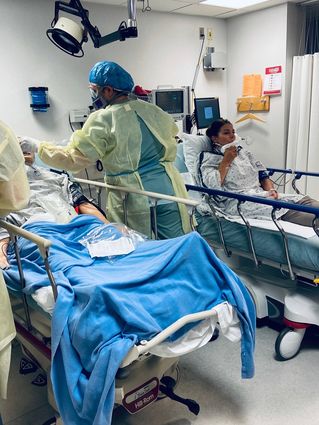 All of the departments at Community Memorial Hospital that would be involved in a COVID-19 surge recently held an exercise to see what worked and where there needed to be changes to ensure the Cloquet hospital is ready for what might be coming. About 20-25 employees participated. There were dummies in beds, as well as Nikki Wilmes (pictured), the director of lab, who volunteered to be a patient.

In nearby St. Louis County, total confirmed cases sat at 198 with 16 deaths as of July 8.

While the state's original predictions of a peak in July did not come true (yet) because of early measures, state officials warn that people are not being cautious enough.

On Wednesday, the state's infectious disease director Kris Ehresmann called out young adults for not following social distancing recommendations at bars and gatherings.

Across the state, there have been 39,589 confirmed cases since the pandemic began, with 1,485 deaths. Of those, a total of 34,902 infected people have been released from isolating at home, health care centers and senior living facilities.

Beginning July 6, the state updated a few of the measures/metrics they have been watching to evaluate the rate of new cases and how the virus is spreading.

MDH and state officials continue to watch these dial-back measures closely in order to make decisions about the phased reopening strategy.

All of the departments at Community Memorial Hospital in Cloquet that would be involved in a COVID-19 surge recently held an exercise to see what worked and where there needed to be changes to ensure the hospital is ready for what might be coming. About two dozen employees participated. There were dummies in beds, as well as Nikki Wilmes, the director of lab, who volunteered to be a patient. CMH safety officer Lucas Goodin coordinated the drill. He said the exercise followed two simulated critically ill patients through the process of admission to the emergency department to their admission to the intensive care unit.

"We were able to test the surge plan that has been put into place by Incident Command and find out how we can improve upon it," Goodin said. "This was an in-depth test of every department that would be involved in the patient care process. Overall the exercise went very well and helped us find ways to improve the patients care and provide added layers of safety for our staff."

CMH has been doing testing at the hospital and at the Raiter Clinic and have treated, as appropriate, those testing positive, according to hospital spokesperson Nancy Taggart. The incidence so far has been very low, she said.

Face coverings will be mandatory for anyone in a court facility, including judges and staff, beginning July 13, according to an order issued Tuesday by Minnesota Supreme Court Chief Justice Lorie S. Gildea.

"Requiring face coverings to be worn in court facilities when physical distance requirements cannot be maintained will contribute to the administration of justice by allowing the Judicial Branch to continue to safely and methodically expand court services and in-person court proceedings while implementing uniform safety measures in all court facilities," said Gildea.

The order follows a national public opinion survey conducted by the National Center for State Courts, which found that 70 percent of respondents would be more comfortable in a court facility where masks were required.

The Minnesota Judicial Branch continues to be in a transitional phase, as established by orders. A May 28 order reopened court facilities on a limited basis for additional in-person access. Some counties may require appointments for public counter or public access terminal access. Local court facilities may continue to have additional conditions for entry.

Visitors are asked to self-screen for symptoms or exposure before entering a court facility. Those exhibiting symptoms of COVID-19 or who have been exposed to someone with COVID-19 within 14 days of when they need to enter a court facility are asked to contact the court or their attorney, rather than come to the courthouse. Symptoms to self-screen for include chills, cough, muscle pain, sore throat, shortness of breath or difficulty breathing, fever of 100.4 degrees or higher, or new loss of taste or smell.

Counties that have been approved to conduct criminal jury trials will continue to provide face coverings to summoned jurors.