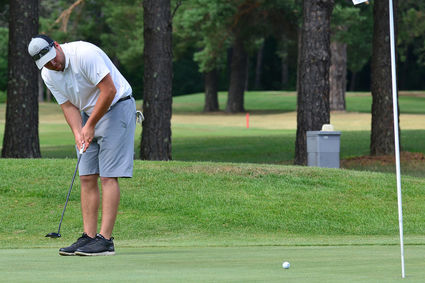 Despite pandemic restrictions and a monster storm last week, the 89th Cloquet Invitational was declared a success and Alex Kolquist its winner. Kolquist won by two strokes over Travis Blais from International Falls, who was in the group ahead of him. Dan Moline was third. Jamie Langenbrunner finished in a three-way tie for fourth.

Kolquist , a Hermantown native, was the leader after Saturday's round, with an even par score of 71, and also after 18 holes on Sunday. The changed format called for 27 holes for the championship flight on Sunday. It was the second Cloquet Invitational championship for Kolquist, who also won in 2012.

For a while, it was a race between Kolquist and Langenbrunner, a Cloquet native and retired professional hockey star.

"Jamie Langenbrunner was in my same grouping for all 45 holes," Kolquist said. "Since I was putting the scores into the on-course computer program, I knew we were close to deadlocked and it was a little nerve wracking. It was my goal not to have a double bogey all weekend and I managed to do it, which is hard on this golf course."

The turning point of the championship flight might very well have been hole No. 3 on the last nine. Kolquist and Langenbrunner were tied when they reached the challenging par 3 hole, which measures 233 yards. Kolquist's tee shot went left and short of the hole by 30 yards near the sand bunker. Langenbrunner landed pin high and about 7 yards off the green's left edge. Alex's chip shot was a low screamer that, luckily, struck the flagstick about 4 feet up and only deflected to the edge of the green. It could have been much worse. The pin was cut on the left side so Langenbrunner had a tough short-sided chip and then some putting woes. Kolquist came away from the hole two strokes up.

The senior championship flight also competed on Saturday and Sunday with 18 holes both days. Shane Johnson, who shot a closing round of one under par 70, came from behind to win the event by three shots. Don McKay, who has won several tourneys in the region in the past including the Invitational, was crowned runner-up. Third place went to Tim Schnobrich.

On Thursday and Friday, 96 players competed in regular flight pairings. There were 12 flights, based on handicap, with eight players in each flight. Thursday's setup was an 18-hole match play with the winners playing against each other in-stroke play on Friday. It was somewhat abbreviated to safely manage during the pandemic.

The weather was perfect throughout the Thursday-Sunday tournament, but organizers were a little worried the evening before the kickoff, when the clouds around Carlton County turned ominous and exploded with lightning and thunder and much needed rain on Wednesday, July 8. More than 3 inches fell, to the delight of Cloquet Country Club golf course superintendent Jud Crist, then the weather calmed down Thursday through Sunday for the 175 participants.

"Well, we had a very successful tournament under the duress of the pandemic," said Country Club pro/manager Bill Manahan. "Thanks much to the clubhouse and pro shop staff and Jud's greens crew. The course was in great shape. With restrictions, food and beverages, carts, scoring, and facilities were safely provided to players and their families and other guests with our best effort under the circumstances."

To help with social distancing due to the coronavirus pandemic, the tournament was expanded to four days from the usual three. The Cloquet Country Club implemented a number of other changes to help keep golfers and their fans healthy.

Here are a few things that were noticeable:

• There was no handshaking either before or after matches, a long-held tradition in the friendly game of golf.

• Nearly all food and beverages were served outside.

• One saw more carts with just one passenger and many golfers walking.

• Extra events organized by CCC staff to keep patrons entertained, including one club and cornhole tournaments, were available. 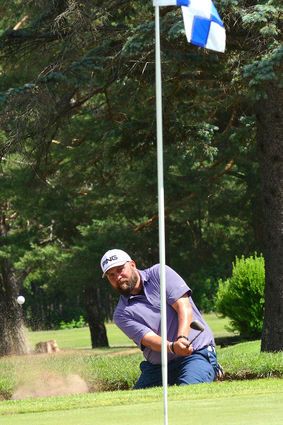 Derek Benson hits the ball out of a sand trap during the 89th Annual Cloquet Invitational at the Cloquet Country Club on Sunday.

• No pins were removed for putting or rakes found in sand traps.

• The ball washers were bnot available.

• People were wearing face masks provided by The Medicine Shoppe.

Overheard conversations by players included praise for the course conditions and the overall event planning.

Next year's tournament will be the milestone 90th. Many golfers were already marking it in their July 2021 calendar.