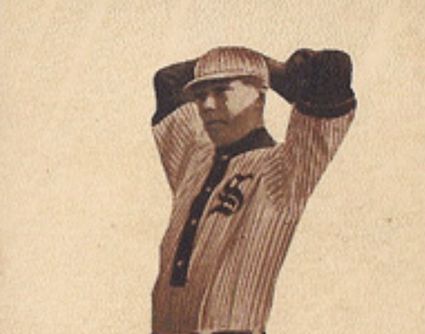 Seen here in a long-ago baseball card, Fond du Lac band member William Cadreau was a baseball player who grew up, and is buried, on the Fond du Lac Reservation and pitched one game in Major League Baseball for the Chicago White Sox in October of 1910.

Remember William Cadreau? He was featured in a Pine Knot story last fall. He's the baseball player who grew up, and is buried, on the Fond du Lac Reservation and pitched one game in Major League Baseball. Cadreau was the starting pitcher for the Chicago White Sox in October of 1910 in the team's final game of the season. The game was at what was then the new Comiskey Park in Chicago against the Detroit Tigers. 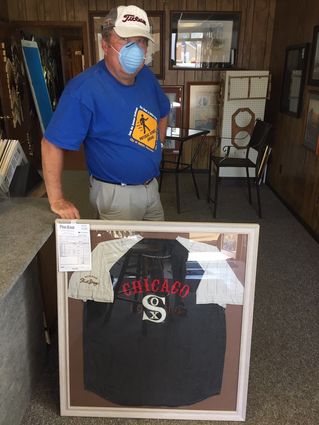 Pine Knot columnist Steve Korby picks up the replica White Sox jersey from a frame shop in Superior. Korby has been working with the White Sox and the Twins to put together a display of Cadreau for the reservation.

In a tribute to Cadreau's accomplishment, a display is being developed in his honor at the Fond du Lac Reservation Cultural Center and Museum on Big Lake Road. The display will include a framed replica Chicago White Sox jersey from the era Cadreau played, a reprinted copy of the Pine Knot story, and even a brick from old Comiskey Park which was replaced in 1991 after serving as the home of the White Sox from 1910 to 1990.

Cadreau pitched in baseball's minor leagues for many years but made only the one appearance in the majors. He pitched in Vancouver, Seattle, the Negro League in Chicago, Sacramento, Montana, Minot, Canada, and across northern Minnesota and Wisconsin. He even threw in Texas shortly after serving in the Army after World War I.

The Minnesota Twins, in recognizing Cadreau's achievement overcoming many barriers, have contributed toward the framing of the jersey in support of the project. The Chicago White Sox sent an old Comiskey Park brick for display in Cloquet. It is very special that two Major League Baseball clubs support and acknowledge this tremendous story. Look for more pictures and a followup in the Pine Knot when the Cadreau tribute is complete.