Judges at Cloquet's Garfield School were socially distanced while waiting for Ward 2 voters Tuesday. Election judge Joe Peterson said even though the turnout was slow, judges stayed busy sanitizing surfaces after each voter came through.

Tuesday's primary election offered a small taste of what the general election will likely offer voters in November.

Far more people voted either by absentee or mail ballot than ever before, outnumbering people voting in person. Those who voted at polling stations were required to follow pandemic social distancing measures and wear masks inside. Election judges also had to sanitize any surfaces touched by voters after each person voted.

Although all the votes were tallied by Tuesday night, the results were not final. For the first time this year, mail and absentee ballots will be accepted for two days after the election - as long as they are postmarked on or before election day and are delivered by mail. Voters cannot bring their own ballots in after election day, Carlton County acting auditor/treasurer Kathy Kortuem said.

"I never miss my chance to vote," she said, adding that it was important to her to show up in person to the polls. "It's my right."

Soraparu was in the minority in Carlton County and Minnesota, where voters by mail and absentee outnumbered voters at the polls in the primary election. As of Tuesday night, Carlton County officials had received 3,240 mail or absentee ballots while 2,041 people voted in person at the polls. More absentee and mail ballots were expected on Wednesday and Thursday, Kortuem said, noting that the county would update the vote totals after the office closed on Thursday.

Statewide, more than 500,000 absentee ballots had been returned as of Monday. That's more than 200,000 more than in the 2016 primary before voting even started Tuesday and with ballots still in the mail.

instead of the usual one week - the Carlton County Auditor's office had all votes counted by 10:30 p.m. Tuesday night.

Following are results of the local elections including votes received up to and on election day.

In the Cloquet City Council Ward 5 race, Elizabeth "Lyz" Jaakola garnered the most votes with 210, followed by Dennis M Painter with 117 votes. Former Cloquet mayor Dave Hallback was in third place in the vote count, with 103 votes, after Tuesday.

In the District 5 Carlton County commissioners race, incumbent Gary Peterson had the highest number of votes with 570, followed by Alex French with 316, and Marci Moreland with 207 after Tuesday.

The top two vote-getters will advance to the general election in November. Again, final vote tallies won't be released until after 4 p.m. Thursday so these numbers will certainly change over the next two days.

Kortuem said they got fewer ballots in the mail on Tuesday, so she was hoping that most people mailed their ballots in plenty of time to reach the courthouse and be counted.

Check back for updated results online at http://www.pineknotnews.com or in next week's paper.

There were few issues at the polls on Tuesday, but Kortuem said some voters were confused by the fact that there were four major parties on the ballot for the first time, including both the Legal Marijuana Now and the Grassroots-Legalize

Cannabis parties in additional to the Republican and Democratic-Farmer- Labor parties.

Neither of the newer parties got a lot of votes in Carlton County, with their U.S. Senate candidates taking 36 and 35 votes, respectively, compared to 1,069 for the top Republican candidate Jason Lewis and 2,488 for incumbent U.S. Sen. Tina Smith, who faced four challengers in the DFL party. Lewis also easily defeated four other candidates. 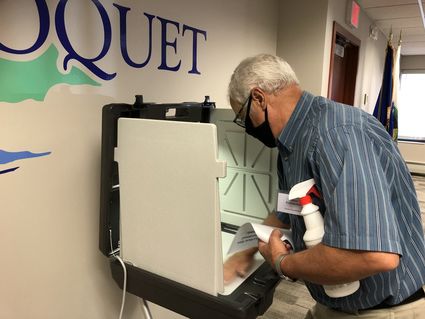 Ward 3 election judge John Cavanaugh sanitized a voting booth Tuesday. Voters were asked to turn over a piece of paper that read that the station had been sanitized.

Kortuem said there were a number of spoiled ballots at the polling stations because people voted for more than one party, but people could choose to vote again correctly.

"When you put the ballot in the machine the counter will tell you that you voted for too many parties," she said.

She and Roxanne Oswold were opening the most recently received mail ballots Tuesday night, and found at least one spoiled ballot in that bunch.

"I think it's orange juice," said Oswold, agreeing that they would transfer the votes to a fresh ballot before running them through the machine.

After posting all the vote totals by 10:30 p.m. Tuesday, Kortuem and her crew were back at work Wednesday morning first thing.

She planned to count and report all the additional votes on Thursday night.

"We'll have to start putting things away and getting things ready for the next election almost immediately," she said.