Leaving school job with a smile 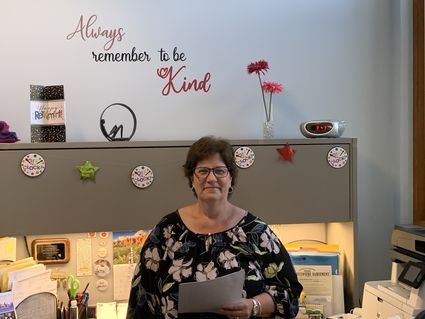 Bonnie Monfeldt, longtime executive assistant to the superintendent for the Cloquet school district, is retiring after 20 years with the district. Monfeldt was involved in many aspects of the district in her job, from helping families and staff to working with school administration and the school board.

A long chapter in the history of the Cloquet school district ended Friday when Bonnie Monfeldt retired. Monfeldt served as executive assistant to the superintendent the past two decades and was part of almost every major decision over that time. One can only wonder at the volumes of meeting minutes and notes she has typed up over the years.

Only the fifth executive assistant in the school district's 95 years of existence, Monfeldt worked for four superintendents - one of them twice.

Russell Smith was the superintendent when Monfeldt started with the district in 2000. He retired and was replaced by longtime principal John Langenbrunner for a year-and-a-half, then Smith returned for six months until Ken Scarbrough was hired. "They're all different in their own ways, but they are all very hard workers," she said.

"He worked 24/7 and always, always had the best interest of the students in his heart," she said. Smith founded and still serves on the board of the Cloquet Educational Foundation.

"He is purple through and through."

Scarbrough led the district for 14 years and oversaw the building of the new middle school, an experience that Monfeldt ranks very high in her two decades.

"I was so happy that we were able to complete that project for our students and community, and that I was a tiny speck, a part of it," she said, adding that she drives by the middle school every morning on her way to work at Garfield School. "I just marvel that it wasn't there six years ago, and all the work that went into it by the community and Mr. Scarbrough. Holy cow."

Scarbrough retired at the end of the 2017-18 school year, and was replaced by Michael Cary in the summer of 2018. Monfeldt said it was daunting to get a new boss, but Cary has a calming demeanor, gives great direction, and knows how to laugh.

"He's pushed me to learn a few new things in Google, ugh, but I'm proud of that and he continues to make you want to learn more," she said. "He's leading our school district into the future, and that's what needs to happen. I think exciting things are on the horizon for Cloquet schools."

When asked what she does in her job, in typical Bonnie fashion, she hands over a typed 14-point list ending with "etc., etc., etc."

At the top of the list is providing administrative support to the superintendent, school board and district administrative team. She also coordinated the publication of the Pine Needle, student enrollment, maintains seniority lists, and was the school board election administrator. She loves the fact that her job had so many facets.

"You never know what's going to happen," she says, and tells about the time she had to interrupt a meeting to tell the superintendent about a threatening phone call, or when she met with an entire family wearing only swimsuits.

She loves helping families the most, whether it's connecting them to the right people or resources when they're struggling or explaining the advantages of sending their kids to school in Cloquet.

Did we mention she's also part of the human resources team? Another favorite part of the job is meeting with new staff and helping them complete their personnel paperwork.

"I get to meet with every brand new staff member. I think that is so fun, because they come in and they're all so different and have different backgrounds," Monfeldt said. "Then I get to tell them all about Cloquet and what a great school district we have and how they are going to love working here. I think our staff are amazing."

Her grandkids live in another school district but attend school in Cloquet.

She's a natural at marketing, which was added to her list of duties after she suggested to Smith that Cloquet schools needed a marketing plan to take advantage of open enrollment.

More than a decade later, Monfeldt is still selling the school district - to her family, but also to anyone else who calls to find out more. She tells families with older kids about college-level courses and the growing vocational opportunities at the high school. To families with younger children, she stresses the caring teachers and a vibrant community. The new middle school is easy to boast about, she said.

Although Monfeldt is leaving her job, she'll still be involved. She has those three grandchildren coming up through the schools and she's excited about the expansions to the vocational and career programs.

Retirement beckons and Monfeldt said she is looking forward to doing a little traveling once the Covid-19 pandemic subsides. She's also looking forward to the first big snowfall and the realization that she won't have to drive in to work and can instead enjoy a cup of coffee in the warmth of her home.

"I am walking out of the door loving my job," Monfeldt told the Pine Knot News in an interview last week, a few days before her final day on the job. "I've always thought if you go to work and hate your job, you shouldn't be there. But I love it here. It's different every day. You get to help people and your co-workers make it really fulfilling. I'll miss it. But I'm ready."

Cary said Monfeldt has been an amazing support to him in his first two years with the school district.

"She's a wealth of knowledge about the community and about how the schools have operated historically and what we do," he said. "I'm obviously very sad to see her go, but at the same time, I wish her well in her retirement. And I think Mary Marciniak will do a nice job of filling some big shoes in Bonnie's absence."