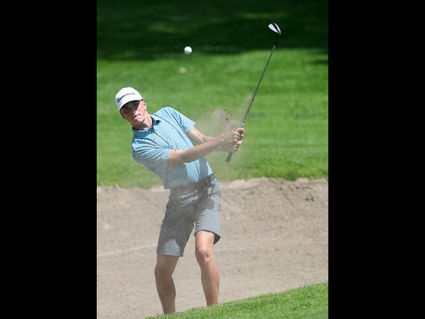 Sam Baker, in action earlier this summer, has had quite a season of golf following the disappointment of losing his junior season this spring due to Covid-19 pandemic closures.

Cloquet High School senior Sam Baker made history on a cloudy day a couple weeks ago, when he set the course record at the Cloquet Country Club on Aug. 12, shooting a record 62 on the par-71 course.

With the completion of the new nine holes at Cloquet Country Club in 2001, the course record of 63 was tallied quite a few years back by local amateur great Don McKay.

Now it is Baker's record to break.

Golfing with Sam was his dad, Bruce, and his twin older brothers, John and Nick. Mom Pam Baker was walking along. They were celebrating Bruce's 50th birthday. Normally, Sam plays the back championship blue tees, but on this day they played the white standard tees. He was using a new putter purchased from his former CHS teammate Keegan Poppenberg.

Baker started the record-breaking round rather inauspiciously.

He got "up and down" pars on the first two holes, making nice putts with the new blade, he said. On No. 3, he made a 25-foot putt for a birdie in two. On No. 4, he went over the green in the sand trap with a back-of-the-green pin location. He said he hit a great sand shot to get within 10 feet and rapped it in for a saving par.

On No. 5, a par-five, his brothers and Dad watched by the green as Sam's 205-yard approach shot lipped out of the cup, leaving a 3-foot eagle putt. On the sixth hole, another par-five, he hit the green in two shots, his second with a four-iron from 220 yards. He two-putted for a birdie. He was now four under par.

Then it started to rain. Mom decided to get out of the weather and go home. The Bakers forged on to see how Sam might do on the second half of the course.

On No. 10, he just missed a birdie putt and parred. On No. 11, a par-five, he used a nine-iron to the green on his second shot. The rain had eased up. His shot missed the green but he got up and down again for another birdie, now seven under par.

He parred No. 12 and No. 13. On No. 14, he hit a four-iron off the tee, chipped within 5 feet of the hole, and proceeded to make another birdie. At eight-under, Sam knew something was up. He said he told his dad, "If I just could par out, I'd tie Don McKay's record score." His dad told him not to talk about it, he might jinx things.

He parred No. 15 and No. 16. On No. 17, his drive went into the woods, but the ball was hittable. He smacked it out in front of the green and then proceeded to chip in for an improbable birdie.

Nine under par. He now needed a par on No. 18, a par-three, to break the McKay record.

He aimed for the middle of the green to be safe and he put it right there. His birdie putt ended up just short, but it was an easy par and a new Cloquet Country Club course record - an amazing round for the local golf prodigy.

In other Baker golfing news, Sam was recently named runner-up for the Minnesota Golf Association's 2020 Junior Boys Player of the Year, in the under-18 age category. He played in two MGA events this year, qualifying and playing in the state amateur tourney at Edina Country Club and winning the Minnesota Junior PGA tournament at The Quarry at Giants Ridge in Biwabik.

Baker is hoping the high school team will get to play golf this spring after winning the region his sophomore year and taking third at state. He said 2021 could be another great year for CHS golf. "We'll have a strong team," he said. "The key is just putting together two solid, consistent scores by the entire team."

Baker plans to continue playing golf after high school, hopefully at a Division I college, maybe St. Thomas. He works at the country club, where we spoke about his record 62. He's a great kid and it was a thrill to hear the excitement in his voice as he reminisced about the memorable round of golf.

Steve Korby's interest in writing goes back to when he was a fourth-grader and editor of the Scan-Satellite school newspaper in Scanlon. He loves sports, especially golf. He welcomes human interest stories and tales regarding Carlton County residents, projects, history and plans.