Want to see a soccer match? 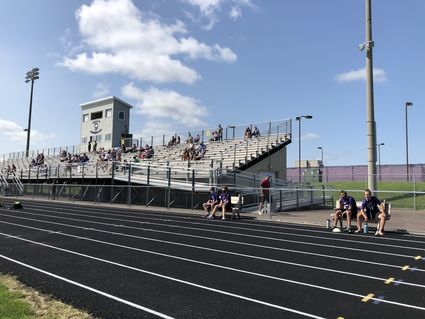 In the age of coronavirus, admission isn't a sure thing anymore. Minnesota schools can have only 250 spectators at soccer games (including game workers) and none at swim meets.

"Area schools decided we needed a plan, as nobody wanted to be turning parents or grandparents away, especially if they have driven from another school to watch the game," activities director Paul Riess said.

Every school with a soccer team in the area agreed to follow the same policy, he explained. Players from each soccer team were allowed to submit names of six family members or friends to attend home games, and four for away games. Only people on the list can buy a ticket.

Riess acknowledged it isn't a perfect solution, but said they needed a policy for soccer games, even though attendance is normally well below 250 people. Without football or volleyball games, area activities directors realized there was a good chance capacity limits would be met if soccer was the only game going on.

"Nobody wanted to simply let the first 250 people in, and turn away families who may not arrive early if they have to work," he said, stressing that every school needed the same policy so it would be consistent for players and parents. "Unfortunately, it will eliminate the community member or teacher who wants to come watch a game. It will also eliminate other students who want to come and cheer on their friends and classmates."

Not yet live is a new program approved by the Cloquet school board earlier this month that will offer people the option to livestream soccer games and swim meets this fall, for a fee. Riess said cameras aren't installed yet, because they are in high demand due to all the other high schools and colleges doing the same thing this fall. The goal is to have the cameras installed soon after Labor Day, he added.

Riess said there is not yet a decision about winter sports and fans.

"Even if we are allowed fans at basketball games, hockey games, and wrestling meets, there will most likely be some sort of capacity restrictions," he said. The district is having automated cameras for livestreaming installed in the middle school gym and hockey arena.

If you can get in through the gate - if not, consider bringing your own chair to the fenceline - the girls soccer game between Cloquet-Carlton and Esko is the best bet for this week.

Although the Lumberjacks were Section 7 champs last year and Esko struggled more than usual, the ongoing rivalry between the neighboring teams means anything can happen. And, because the Duluth East girls team had to take time off because someone on the team tested positive for Covid-19, Tuesday's game will be the first of the season for Cloquet. Esko, on the other hand, will have played one game coming in.

The varsity game starts at 4:45 p.m. Tuesday at the Cloquet High School field. Concessions are not available.