'We need to protect each other' 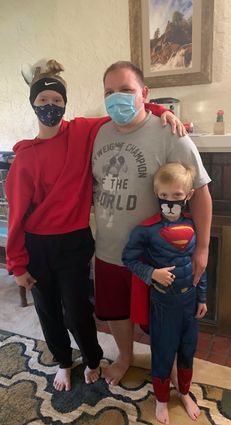 Robert Peacock said knowing his family and friends needed him helped him beat Covid-19. He's pictured here with his niece, Jordis, age 14, and nephew, Josiah, age 10, the day after he got out of the hospital. Peacock blogged about being sick and shared his story with the Pine Knot because he wants people to know the disease is real, and that people need to follow precautions to keep everyone's loved ones safe.

When Cloquet resident Robert Peacock got sick with Covid-19, he decided to share his experience with the world, blogging on Facebook, calling friends, sharing the unpleasant details of living through disease.

Following in the footsteps of his friend Pokey Paro, who blogged about dying of kidney disease, he wanted to break down the walls, and let family and friends in Indian Country know they should go to the doctor when they feel ill, get tested, follow guidelines.

"It's important because it is real," Peacock said in a phone interview the day after he returned home after six days in the hospital. "And we need to protect each other. We need to wear a mask. We need to wash our hands. We need to need to do simple actions that you would do for a friend. We don't have to offend any rulebook or break any law. We just have to do simple things that can make sure that your grandma or grandpa can stay alive. We all have loved ones we want to keep safe."

Two weeks before he tested positive for Covid-19, Peacock tested negative. So he went for a job interview in North Dakota, taking the kids and staying at a hotel, and started feeling like he had a cold.

He was Covid negative, he thought, so it must be a cold. Then he started feeling aches and pains. They kept to themselves and wore masks all the time, even though it wasn't mandated there. With his wife working in health care, they're just careful like that anyway, he said.

He felt OK when they returned home on Aug. 17, but then he started sneezing so hard he was pulling muscles. The next morning, he woke up in the morning coughing up blood.

"I wasn't coughing before so that was my 'OK, something's gotta be wrong with me' moment," he said. He made an appointment for another Covid test. Even his doctor expected it to be negative; they were both expecting it to be pneumonia, which he'd had once before.

He went home with instructions to self-quarantine, which he did in the basement of their home. If he had to use the bathroom, he wiped down all the surfaces he'd touched before going back to his corner of the basement. They all wore masks in the house.

He called Min No Aya Win clinic every day to report on his symptoms. And he got sicker and sicker.

"When you look at a list of what happens to Covid patients, I had every symptom," Peacock said. "Some people just skip a few things. Me, I had coughing, diarrhea. I had nausea. I had headaches, the worst headaches I've ever felt in my life. It's like a pressure in your head and body because of the coughing and it's like your muscles are refusing to agree with you to cough. Everything is tight, and your head is being squeezed."

On Friday, his doctor and nurses told him he should go to the hospital. They called an ambulance, which brought him to the emergency room at Community Memorial Hospital. It was not the visit he needed, Peacock said, describing how a nurse practitioner there made him feel like he shouldn't be there, that he needed to buck up, that he shouldn't get sick so often, and basically sent him home.

Over the weekend his temperature hit 103. But he "sucked it up" and tried to grit it out. If he drank water, he threw up. If he took medicine, he threw up.

His temperature fluctuated between 101 and 103. By Sunday, Peacock said he was veering into delusional territory, begging for help in his head from the universe.

At this point, his wife, Jamie, told him she was taking him to St. Luke's, but they had to get him dressed and out of the basement first. She dropped him at the front doors of the hospital, which were locked. When someone came out, he told them: "I can't make it up the stairs. I need help."

After repeated efforts, the nurses were able to get an IV going - he was so dehydrated that it wasn't a simple task - and the staff took an EKG and a chest X-ray.

The X-ray showed his lungs more than halfway filled with fluid. He had blood clots in his chest. He had the protein levels of someone with liver failure.

Very quickly, the doctor there started Peacock on steroids and an antiviral medication. They helped, Peacock said.

Still, his condition worsened before it got better. He tells how on Tuesday he tried to call his mother to tell her he was fine, and when she answered the phone he started coughing, then his chest started hurting.

"My breathing was bad, because I was coughing so hard I started crapping all over the place," he said. "That's the most fun thing to happen to you. Again, praise nurses for everything. And it was all because I just wanted to call my mom and lie to her that I'm doing OK."

He eventually figured out that the best way to rest was prone, on his stomach. He calls it "Covid sleep." Actual sleep was hard to come by though, so Peacock called people, blogged on Facebook and played video games. He couldn't move around really, just lie prone or sit on the edge of the bed. It was lonely, he said, for a guy who can't turn his brain off and who is incredibly gregarious. He even attended a Zoom campaign meeting on Wednesday, and brokered three video game deals while he was sick.

"My first phase was my body and the fever trying to kill me to kill the Covid," he said.

The next was his oxygen numbers dropping - they hovered between 75 and 88 at St. Luke's - and his liver numbers spiking. But he never got so bad he needed to go to intensive care, he said.

"It was like when the battle was lost by Covid, it was like 'Let's get out of here boys, there's nothing else to do here,'" Peacock said of his recovery. "I'm still fighting the infection, I can still feel it in my chest, it's like crystals and weight. At the same time, I can tell that it passed."

At over 250 pounds, Peacock readily admits that he isn't really healthy or in shape, and credits his age and his strong love for family for getting him through it. "I don't think I could have honestly dealt with it, without the love and support of my wife, my parents, my daughter, my niece and nephew. And like the 100 friends and family that reached out to me."

Peacock posted this photo and message about his lung X-ray on Facebook.

He came home on Friday, and ate his first bowl of applesauce on Saturday. He lost 20 pounds while he was sick. He still has a long way to go to full recovery, describing himself as "60 percent" of the person he was before. It's strange, he muses, how the disease hardly affects some people, then reaches someone like him and turns his whole world around.

They don't know where he got it, but Peacock wonders if his wife was asymptomatic, because people had tested positive at the senior living facility where she works. But she and the rest of the family have all tested negative now, so it remains a mystery.

If his experience makes people more thoughtful, more cautious, then Peacock said he will feel better about it.

"There's a lot of people that are thinking about themselves right now," he said. "And you have to know that we all have loved ones we want to keep safe, and so if you could wear a clean face mask and wash your hands, then you're doing everything in your power to make sure someone's loved one is still with them tomorrow."