Local players speak out in action and words 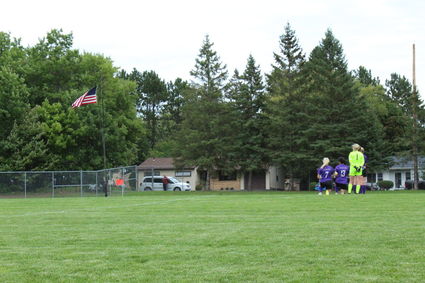 Several Cloquet players including Mireye Moose and Katelyn Kelley (pictured) and Ilie Benson took a knee during the playing of the national anthem Tuesday before the girls soccer game against Esko. After the game, all three stressed that they were not kneeling to show disrespect for any current or former military members, but rather to show support for the Black Lives Matter movement and to protest police brutality and the unfair treatment Black people and People of Color receive more often at the hands of police.

"Kneeling may seem like a small thing to do, but it's those small acts that build up to have a larger impact," Benson said. "While I may not be Black, I am part of a minority that continues to face systemic racism, discrimination, racial stereotypes, etc. I kneel to support the POC community and the BLM movement, and I try to take as much action as I can in order to make change happen."

Moose said recent events have not shown that people everywhere want justice and equality for all walks of people.

"Those that choose to sit in silence are seen as continuing to support inequality and injustice, which is not something I want to be a part of," Moose said. "It's important that people use their voice, support, and protest peacefully to invoke change."

She added that in kneeling, she honors the sacrifice military personnel "have made and continue to make so that we could have the freedom of speech, the freedom to protest and defend those that have been oppressed.

"Lastly, it's important to acknowledge that the act of kneeling brought forth the opportunity to communicate in an open and free manner, which is the first step to moving towards change."

Kelley suggested people can show support in different ways: by kneeling, donating to Black organizations, attending protests and many other measures in between.

"It is immensely important to support and help those who have faced the oppression you never have and never will," said Kelley. "When one shows support for those who are different from you, it brings everyone closer as a community that is not rooted in hate, but in love."