Lions Club group has been at it since program inception 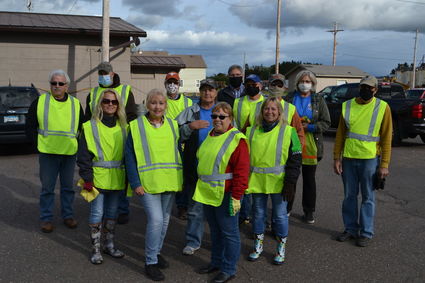 Volunteers from the Carlton Area Lions Club met Sept. 9 to pick up their adopted 2-mile section of Interstate 35. It usually takes about two hours to do the full 2 miles on both sides of the road, member Ron Haupt said.

Both the Carlton Area Lions Club and the state of Minnesota are celebrating 30 years of the Adopt a Highway program this year. The Lions Club is one of 475 groups that have been with the Minnesota Department of Transportation program every year of its existence.

Lions member Ron Haupt has been there from the start. "I don't agree with people that throw garbage out the window, it looks terrible," he said, adding that he and his wife will pick up along the trail when they go for a walk as well. "If I can do something to reverse that, I do. It's not much, but we're doing our part to clean up and keep it looking nice."

According to MnDOT, more than 38,000 volunteer groups - ranging from four to 25 people - spent an estimated 272,000 hours cleaning roadway ditches in 2019, picking up 40,000 bags of trash across Minnesota. That translates into an estimated $7 million in realized benefit for the state.

"The Adopt a Highway program is proof that Minnesotans care about their state," said Ann McLellan, statewide program manager. "Volunteers picking up litter along our roadways also allows our MnDOT crews to focus on other work, like repairing a guardrail, mowing and keeping highways safe. It's a win-win situation for all involved."

The Carlton Lions Club picks up 2 miles of green space along Interstate 35, starting at the interchange with Minnesota Highway 210 and heading south. They do it twice a year, every spring and fall, said member Joel Soukkala.

Haupt said his best find ever was an iPhone 7 Plus.

"I found it on the roadside, charged it up and took it to Verizon," he said. "They called the owner and he said he didn't want it because it got wet and wasn't working with the Bluetooth so he tossed it out the window. So I got myself a new phone."

They've found a little money, and some wallets with ID cards that they returned to owners. Lots of tire fragments, and even an entire RV awning that must have blown off. They've also found their share of nasty surprises, including what looked like a homemade drug pipe, which they all examined and then threw into the garbage. They've also found plenty of ticks - which weren't so bad this spring - and even had a baby bear sighting last spring.

MnDOT provides volunteers with safety training, including new Covid-19 guidelines as well as trash bags and safety vests. The agency also picks up the bags of litter and posts signs along the adopted segments of roads with the names of the volunteer groups. They tell volunteers to not pick up hazardous waste such as hypodermic needles or dead animals; rather, they should place a full bag near the item for MnDOT personnel to remove.

Haupt said they'll get a few friendly honks when they're cleaning up, which can take up to two hours for the dozen or so volunteers that show up.

"We split into groups: a couple go south from Carlton, a couple others go north to the Carlton ramp," he said. "The group that goes past the Pine Hill Golf Course usually fills its pockets with errant golf balls."

A final benefit for Lions members who participate in the cleanup efforts is a steak dinner at the VFW cooked by club members, with side orders by secretary Jim Vnuk, who also runs Jim-N-Jo's Katering. "We eat well," Haupt said.

Haupt said he would recommend participating in the program to any club or group considering it. 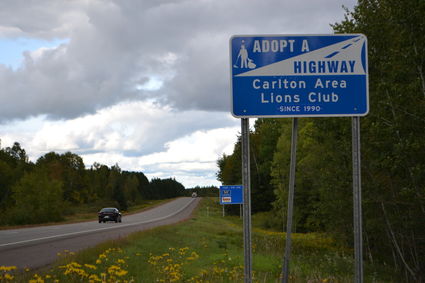 The Lions Club cleans up areas near Interstate 35 south of Minnesota Highway 210.

"Get your group together," he said. "There's good camaraderie, and a nice feeling of satisfaction when you're done, knowing it's a cleaner place for your efforts. And it raises awareness when we're dragging yellow garbage bags in our fluorescent vests."

Barbara Nelson coordinates the Adopt a Highway program for MnDOT's District 1, which includes Carlton County. She said there are close to 600 groups in northeastern Minnesota. "Finding an available location can be difficult. Sections close to cities like Duluth or Cloquet are filled," she said, adding that most available sections are in the outlying areas. They do keep a waiting list for groups, and the AAH program is developing a website map that will show people what sections are available.