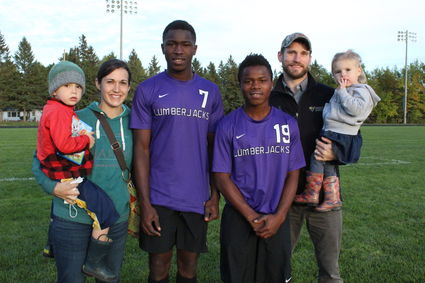 The Aultman family is finally together. Pictured from left are Jaran, Jackie, Jordan, Elijah, John and Ruth.

A remarkable goal by freshman Elijah Aultman last Thursday pretty much cemented the soccer player's standing on a new team in a country he's called home for less than a year.

Elijah and his brother, Jordan, came to Carlton County from Sierra Leone last year, after being adopted by John and Jackie Aultman of Esko. They went from a place that is tropical all year to Minnesota in winter, and from a country that is ranked as one of the poorest in the world to one of the wealthiest.

The constants in both places are soccer and each other.

Jordan, a sophomore midfielder, has six goals and three a...