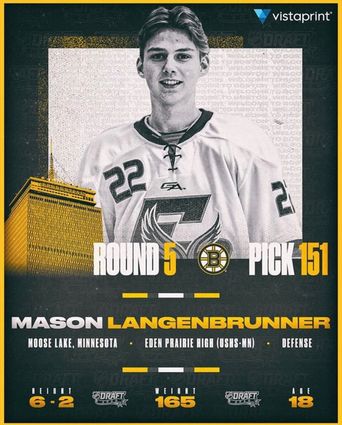 Former Cloquet student and varsity hockey player Mason Langenbrunner was drafted by the Bruins last week, as depicted in the photo illustration he provided. Some of the information is out of date. The Eden Prairie senior is actually 6-foot-3 and weighs 180 pounds.

Last year, former Cloquet High School student and hockey player Mason Langenbrunner made an unexpected move away from the Lumberjacks to play his junior season with the Eden Prairie Eagles.

He's been busy ever since.

Langenbrunner helped lead the Eagles to their second straight state championship appearance. Shortly after his move to Eden Prairie, he committed to Harvard to play Division I hockey. Last Wednesday, Oct. 7, Langenbrunner's childhood dream came true; he was drafted by the Boston Bruins with the 151st pick of the NHL draft. He still plans to play college hockey at Harvard despite being drafted.

Langenbrunner's former CHS classmate and Minecraft co-player, Jack Slater, of the Pine Knot News, caught up with Langenbrunner on the phone earlier this week. Here is what he had to say.

Q How did you figure out that you had been drafted by the Boston Bruins?

A I had just gotten done with practice and we were in workout. NHL Network was on the TV in the other room while my team was working out and my name popped up on the screen. They all came running out to congratulate me.

That was pretty cool.

Q What exactly is the drafting process in the NHL?

A There's specific birth dates that you have to fall between for it to be your draft year, then you're eligible for two or three years depending on when that birth date is. My birthday is September 14, 2002 and the cutoff is September 15, 2002, so I made the draft by one day. If a team drafts you, that means that they have your rights for when eventually you're going to sign. Once a team signs you is when you become ineligible to play college hockey.

Q Do you feel any pressure being drafted while still in high school?

Q How did your season at Eden Prairie compare to your time playing Cloquet hockey?

A At Eden Prairie, every night we were playing teams that are overall better; you're not having those throwaway games where you're just blowing the teams out. A lot of the guys in the locker room were in a similar situation to me; there are guys who are committed to D-1 colleges and were competing and trying to get to those levels. When you're surrounding yourself with people that are in the same situation as you are, and reaching for that common goal it makes it a lot easier. When I was in Cloquet, those guys wanted more than anything to be the best hockey players they could and I think a lot of them are really good players. It's different in the feeling and the work put in outside the rink. I think that guys in Eden Prairie or Cloquet are both working their butts off to get where they want to be.

QWhat were your two favorite things when you played for Cloquet hockey?

A When we were winning games, the whole community backed us up. The Cloquet area loves their hockey teams and they love to support them. That was one of my favorite things. Another one was playing with the same exact group all the way up. Me and Cade Anderson literally played together for six straight years. You kind of build a brotherhood and they're guys that you're playing with your entire life, so those are my two favorites.

QHow did quarantine (when the governor shut down schools) affect hockey for you?

A I think quarantine may have actually helped me, I was able to get in the gym for an extra two months instead of going and playing. That helped me build strength in an area of my game I wanted to improve.

QDo you think that there's pressure with your dad 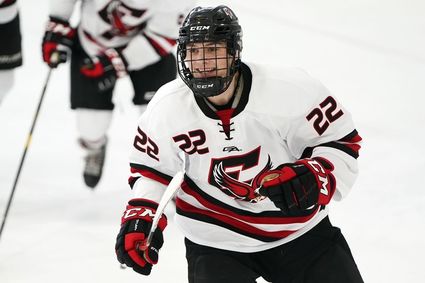 A Yeah, obviously there's a bit of pressure. Growing up, you're scared because of your name or that you're Jamie's son. All that stuff goes into it. At the same time I think it's a gift because it gives me certain opportunities and experiences that a lot of people haven't had. It helps me with a big part of my mental game. I have to get over that fact and know that I'm my own player and be able to accept it and just continue to grow as a hockey player. It's a blessing and a curse at the same time, but I wouldn't trade it in for anything.

QWhat are you doing right now in terms of hockey, and your current living situation?

A I'm playing a league called the USHL, for the Sioux City (Iowa) Musketeers. The USHL is the top junior league in the U.S. It's where a lot of guys go before they go to college, seniors in high school play or sometimes even juniors in high school.