Updated: Haven't voted yet? Here's what you need to know 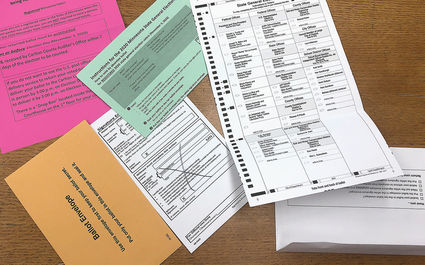 The months of campaigning are peaking now, with Election Day on Tuesday and both local and national candidates trying to reach people who have yet to vote.

Carlton County acting auditor/treasurer Kathy Kortuem wants people to know they can't bring those campaigns to the polls with them on Tuesday. That means no signs, and no T-shirts or facemasks emblazoned with candidate names.

"All that stuff should be covered or left in their vehicle," she said.

For those voting in person on Tuesday, Kortuem stressed that pandemic precautions will be in place, and voters need to do their part: wear masks, and stay at least 6 feet away from others in line.

The state provided masks for election judges and a few disposable masks for voters, who should wear their own masks. Hand sanitizer and surface cleaners are available at each polling place, and voting stations are cleaned between voters.

If you're not already registered, you can register to vote at your polling place, but check to be sure you have the correct documents to register. These include an ID with current name and address, OR a photo ID plus a document with current name and address such as a bill, lease, student fee or start-of-service statement due or dated within 30 days of the election. Find out more at http://www.sos.state.mn.us or call the auditor's office at 218-384-9127.

Meanwhile, early voting in Carlton County has already exceeded that of both the primary election this year and the 2016 presidential election, when a total of 4,187 people voted early (out of 4,580 requested ballots). A total of 3,322 Carlton County residents voted by mail or absentee ballot in this year's primary election, while 2,041 people voted in person at the polls.

As of Monday, Oct. 26, Kortuem said the auditor's office had sent out a total of 11,431 mail and absentee ballots and had 7,931 returned out of the 21,424 voters who were registered as of this year's primary.

Although the massive number of ballots arriving in the mail has slowed somewhat in the last week, the county auditor said the number of people coming into her office to vote every day has doubled to around 100.

But time is short for early voters, and could be getting shorter. On Thursday, a three judge panel of the 8th U.S. Circuit Court of Appeals said any absentee ballots that come in after Election Day in Minnesota should be separated from the rest of the ballots, in case a future order makes those votes invalid. So while the ruling doesn't block Minnesota's seven day extension for counting absentee ballots that are postmarked by Nov. 3 but not delivered on Election Day, it does order a lower court to issue a ruling that would keep the late arriving ballots separate so they can be “removed from vote totals in the event a final order is entered” that finds them unlawful, MPR News reported.

To avoid not being counted or having their votes invalidated at a later date, that means voters who didn't get their ballots in the mail already should probably bring them to the courthouse, or have someone drop them off, to be certain their votes are counted.

Completed mail or absentee ballots can be deposited into the drop box by the Courthouse side entrance door or taken to the auditor's office on the second floor.

Read the directions when voting, Kortuem advised. The biggest mistake people seem to make is forgetting to sign the white signature envelope for the ballot, she said, including their social security or driver's license number, whichever one they used to apply for the ballot.

If you have already mailed your absentee ballot, you can check to see if it's been accepted or not at https://mnvotes.sos.state.mn.us/AbsenteeBallotStatus.aspx.

If you lost your ballot or never received a mail ballot because you weren't registered to vote, you can still vote at the courthouse or at the polling place, she said.

On Election Day, voters who live in mail-ballot precincts can register and vote at the courthouse from 8 a.m. to 8 p.m. on Election Day.

If you live in a precinct with a polling place you can drop off your absentee ballot at -- or have someone else deliver it to -- the Courthouse by 3 p.m. Tuesday; otherwise, those living in precincts with a polling poll must vote in-person at their assigned polling place. Absentee ballots won't be accepted at regular polling spots on Election Day, voters most bring them to the courthouse, Cloquet City Clerk Kris St. Arnold said.

If you have not requested an absentee ballot before Election Day, you must go to your polling place to vote.

Kortuem warned that people should not try to vote twice, or they will face legal consequences.

She explained that her office marks the names of voters who returned absentee ballots with "AB" in the roster for each precinct, so election judges will see if they try to vote in person as well. Additionally, when the in-person and absentee ballots are entered into the state database, both votes will match up with the voter's name.

"As soon as we log in those votes, it will show up," she said, "and you'll be charged with a fraud. The county attorney will follow up on any case."

She said those who applied for an absentee ballot, but didn't use it, can vote at the polls.

Kortuem disputed social media allegations that the county has closed polling places without telling people. This year Carlton County has a total of 19 mail ballot precincts and 19 polling places, with six in the city of Cloquet.

"No polling places in Carlton County have been closed," she said. "Four precincts did change to mail balloting, but all registered voters were mailed postcards announcing that change. Newspaper ads were also taken out to announce the change."

Additionally, Kortuem explained that what people are referring to as "poll watchers" are not allowed in Minnesota. However, specifically appointed "challengers" are permitted to be present in the polling place during the hours of voting. Appointment as a challenger requires issuance of a written certificate. Challengers are allowed to challenge eligibility only, and they must have personal knowledge (not a suspicion) that a voter is not eligible to vote.

"They can't interact with voters at all," Kortuem said, explaining that an election judge must act as a go-between.

Editor's note: This story was updated for the website after the 8th U.S. Circuit Court of Appeals panel issued its ruling Thursday, after this week's Pine Knot News was printed.